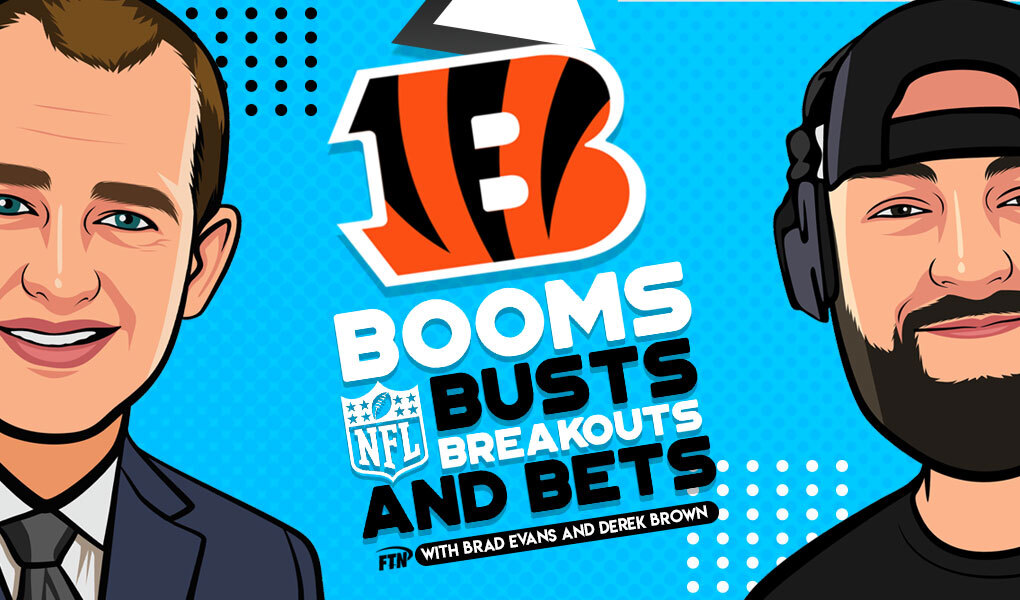 FTN's Brad Evans and Derek Brown offer up their picks for some of the key fantasy football names to know and picks to make on the Cincinnati Bengals in 2021.

As the mercury rises and we inch closer to training camp openings, our resident fantasy football aficionados, Brad Evans and Derek Brown, profile their favorite Booms, Busts, Breakouts and Bets for every NFL team. Giddy up, gamers. Today’s topic: The King’s Island Cats.

All the reports coming out of Bengals' camp have been positive about Joe Burrow and his surgically rebuilt knee. Assuming he's ready to rock-and-roll in Week 1, Burrow's ceiling is massive this season. Zach Taylor will reprise Cincinnati's offensive design with his franchise quarterback returning to the field. With the LSU legend under center last year, the Bengals ranked 10th in neutral script pace and led the league neutral script passing rate (64%). If volume is king, Taylor's insistence on throwing the ball could lead Burrow toward the pinnacle of fantasy quarterbacks.

The Cincinnati fan base has happily welcomed Ja'Marr Chase, adding to an already impressive duo of Tee Higgins and Tyler Boyd. If any stragglers are still peeved about the front office passing on Penei Sewell, understand this offensive line is still set to be improved upon the 2020 version. Jackson Carman and Riley Reiff's contributions will be more prevalent in pass protection than clearing paths for the running game. Target Burrow in the late-round quarterback sweet spots in the eighth and ninth rounds of your drafts.  — Derek Brown

Wolverine blood courses through Burrow’s veins. The fact he was moving around, planting and throwing during OTAs only seven months removed from wrecking his ACL and MCL against the Fighting Footballs was nothing shy of remarkable. Score one for modern medicine. On track to be all systems go for the Bengals opener versus Minnesota, he’s poised to build off a rookie season in which he finished QB15 in fantasy points per game. When you consider that he ranked outside the top-30 in every completion percentage category imaginable and worked behind an offensive line No. 27 in pass-blocking efficiency, he’s likely to take a generous step forward.

Tee Higgins, Ja'Marr Chase and Tyler Boyd are three enormous reasons why Burrow could spin 30 TDs in his sophomore season. They’re quite the talented trio. Match their presence with a presumably below-average Bengals defense and only his questionable health could prevent him from cracking the QB1 class in 12-team formats. Monitor his progress in training camp. If reports are positive, bank on a big leap. He’s an ideal pick for the wait-on-a-QB crowd (103.1, QB12 ADP). — Brad Evans

Upended by a mysterious foot injury the coaching staff frustratingly labeled “week-to-week,” Mixon grossly underwhelmed in 2020, playing just six games. Even when on the field, the Bengal didn’t earn his Friskies, as he finished RB45 in yards created per touch, RB81 in yards after contact per attempt (2.55) and RB33 in juke rate. Point the finger at Cincinnati’s flimsy offensive line all you want, but at what point do we start questioning Mixon’s vitality? His inefficiency is alarming.

If the rusher returns to 2019 analytic levels, especially in missed tackles and YAC rates (18.7%, 3.15 YAC/att), it could unlock a top-12 season. Though some are excited about the prospects of rookie Chris Evans, the competition behind him (Samaje Perine, Trayveon Williams, Evans) isn’t the stiffest. He should total 70-plus percent of the opportunity share. Still, reservations are warranted. Najee Harris, Antonio Gibson and JK Dobbins rank higher on my RB list. — Brad Evans

With Gio Bernard flexing his quads in Tampa Bay now, the hype train roar for Joe Mixon has been deafening already and doesn't look to be quieting down as we get closer to the season. Mixon is currently being drafted as the RB12 (15.0 overall), which could be at or above his ceiling this season. The run game efficiency could still be horrendous, and Mixon's touchdown equity could be capped in Cincinnati.

Mixon's abilities on the ground will be key to him paying off the pricey ADP. The offensive line upgrades have quietly been more aimed at protecting Burrow than plowing the road for Mixon. Riley Reiff's dropoff as a run blocker over the last three years has been noticeable. In 2020, among 54 offensive tackles with 250 or more run-blocking snaps, Reiff held the 40th highest PFF run-blocking grade. His pass protection has remained steady, though.

With the Bengals' top-flight trio of wide receivers, they will again be nestled inside the top five in passing rate. While Mixon will garner targets out of the backfield, he's most likely the fourth option when Burrow drops back, which is unlikely to change inside the 20-yard line. With Burrow on the field, Cincinnati was tied for seventh in red-zone passing rate (59%). If Taylor is dialing up passing plays near the goalline, Mixon's touchdown plunges and red zone receptions could hinder his touchdowns.  — Derek Brown

Fantasy Football Breakouts for the Bengals

It's not inconceivable that Tee Higgins, not Chase, is the leader of this passing attack in 2021. After assuming a full-time role with Burrow, Higgins had no issues assuming the lead role in the passing attack. Yes, I know A.J. Green was a shriveled-up corpse of his former self, but Tyler Boyd is no slouch. His rookie year efficiency was eye-popping, operating as a primary outside wide receiver. Weeks 2-10 with Burrow Higgins ranked 19th in yards per route run, ranking immediately behind D.K. Metcalf and Chase Claypool.

With a full season of NFL action under his belt and Chase possibly shaking some rust off with a year off, Higgins could own a slight edge this year. He's being selected 1-2 rounds after Chase in best-ball drafts. Enjoy the discount on a player that could build upon his productive rookie campaign in a big way.  — Derek Brown

Angelic oohs and ahhs reverberated in this observer’s head whenever Chase ripped off chunk after-catch yardage in 2019. Recall, he opted out last season, choosing his personal health and future swelled bank account over football in a challenging year. Some will scoff at the absence, but the youngster is arguably the deadliest receiving prospect to enter the league in a decade. He’s physical, speedy, polished and tough. The dude broke 22 tackles alone two seasons ago. His ball-tracking abilities are equally outstanding.

Higgins and Boyd will eat into his target share, but with the Bengals often scoreboard chasing and given his remarkable raw talents, he will be fantasy impactful off the blocks. It’s well within the realm of possibility he finishes in the range of 70 receptions and 1,050 yards, adding 6-8 TDs. Achieve that and he’ll surpass his WR26 ADP (59.50 overall) expectations. — Brad Evans

Best Bets for the Bengals 2021

Joe Burrow to win Comeback Player of the Year - (+600, DraftKings)

If Burrow and this passing attack light up the winter sky for a full 17 games, he has a legitimate shot at unseating Dak Prescott (+175), who is the current betting favorite.  — Derek Brown

QBs and Harris are frontrunners for a reason, but it’s not unfathomable to believe Chase emerges as this year’s Justin Jefferson. At 12/1, the potential payoff is hard to ignore. — Brad Evans