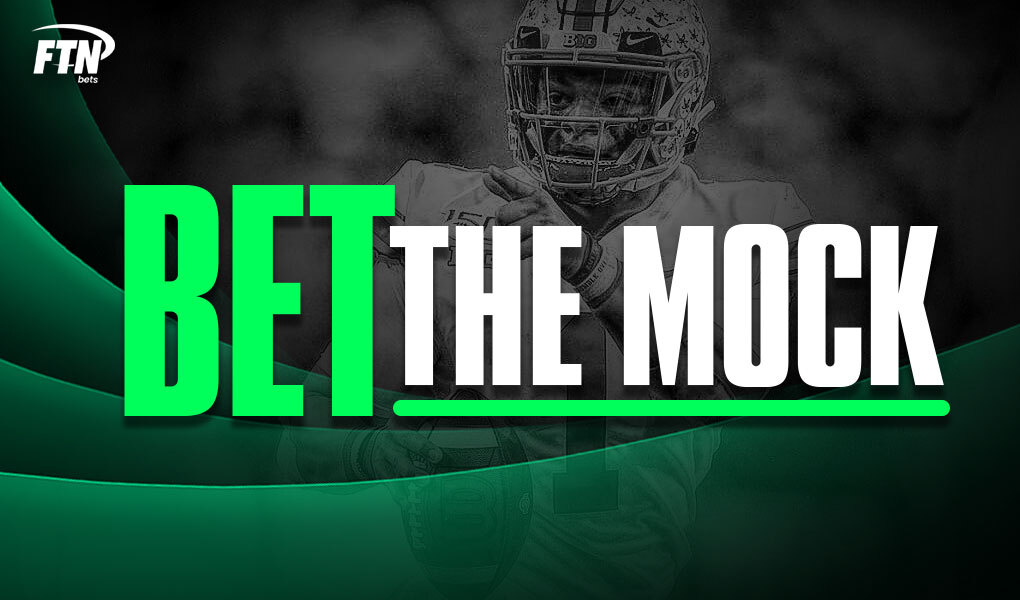 Betting the Mock: The best bets for the NFL Draft (Picks 1-16)

Eliot Crist looks through the best bets to make in the first round of the 2021 NFL Draft.

There are hundreds of opportunities to make money April 29 when the 2021 NFL Draft kicks off, and I am not talking about the players having their names called.

Everyone puts up mock drafts based on what they would like to see happen or what they are “hearing,” but let’s mix it up and do a mock based on the odds and the way to bet the draft.

You will notice there aren't any trades. Why is that? Because trying to predict the unpredictable is a fool's errand. When it comes to draft day trades, I am looking at spots that leave me vulnerable to losing a bet and will have no plays because of it, more so than trying to get the trade right and betting accordingly. The odds are stacked against you trying to do that.

(Check out the second half of Bet the Mock!)

How will the top five shake out and how can we bet on it? Let's take a look.

If you bet $1,000 on this pick on DraftKings Sportsbook, you would win 10 bucks — it is written in stone that it is going to happen. I suppose there are worse ways to make a guaranteed 1% return than Lawrence first overall pick.

This is as high as -2500 on books and is locked in to happening — the entire league knows it after the Jets were not even willing to talk trade down and moved on from Sam Darnold. FTN subscribers are sitting pretty with a -180 ticket and -250 ticket on Wilson being the second overall pick.

Best way to bet it: Pass; all value is gone

The talk was all Mac Jones after Daniel Jeremiah and Adam Schefter said they thought he was going to be the pick, and Jones climbed as high as -305 to be the third overall pick. Schefter has walked that back, and now Jones sits at just -200. This pick is hugely important for the status of players such as Kyle Pitts, Ja’Marr Chase and Penei Sewell for their draft props, as all three are set with 6.5 or lower, and if Jones is the pick here the Falcons have serious leverage in a potential trade spot. With betting the draft, your personal valuation on a player carries no weight, but to trade what the 49ers did to move up they have to go for ceiling and not floor.

Best way to bet it: Mac Jones over 3.5 +198 FanDuel Sportsbook — Why lock yourself into Fields at +200 when you can get the same odds for the pick to just not be Mac Jones? This leaves you a winning ticket if there is a surprise Trey Lance pick as well.

Kyle Pitts to the Atlanta Falcons?

Pitts sits at -167 to be a top-five pick on DraftKings Sportsbook (don’t bet it this way) and +140 to be the first non-QB drafted. He has a prop line of 5.5 with the under juiced. Pitts is a WR/TE hybrid who is a generational talent who the Falcons are said to be enamored with. The risk for Pitts here is the Falcons either going QB or trading out to a QB-hungry team.

Best way to bet it: No Bet — Pitts’ draft position is too volatile and has much to do with unknown QB trades. He should go top-five, but not hard to see him slip to as low as eighth. There hasn’t been a tight end drafted top-five since 1972, so locking in that bet seems overzealous.

Ja’Marr Chase has been gaining a lot of steam for this pick because Joe Burrow is campaigning for him, last year we saw Kyler Murray campaign for CeeDee Lamb and that resulted in nothing. People love to push narratives — storylines sell; they just don’t cash winning tickets. Neither Chase nor Sewell would be a bad pick — in fact, both would be elite picks — but I am willing to put my money on Sewell here. Sewell is going fifth overall in 54% of mock drafts right now. There is no more plugged-in person with the Bengals than Joe Goodberry, who thinks the pick is Sewell.

Best way to bet it: Sewell under 6.5 DraftKings Sportsbook

Another bet for consideration is Sewell as the first non-QB drafted at +200. Sewell has a strong possibility to be the first non-QB if a QB is taken at No. 4 and is also play to the Falcons.

Sewell -500 to be first offensive lineman taken also in play as it is a near lock, with only Rashawn Slater having an outside shot. The one concern you would have is if Sewell slips and the Panthers have Slater ranked ahead of him — personally, I won’t be laying this juice.

The Dolphins traded back up to sixth in my mind because they wanted to guarantee themselves one of the three blue-chip non-QBs in this draft class. Chase is the player I think they always wanted at third and now they get to take him at six. Chase has moved all the way from -155 to -625 on DraftKings and is as high as -950 on FanDuel to be the first WR off the board. This tells us again — narratives be damned the Dolphins are highly unlikely to take Jaylen Waddle or DeVonta Smith just because they went to the same college as Tua Tagovailoa.

Another line we beat on the FTN Bet Tracker, but FanDuel is still offering the most value for the pick. There are two outs here — the Dolphins and the Bengals. I would be floored if he made it past both of them.

Another line FTN subs crushed grabbing this at -155 a month back. NFL draft lines and juices change like few other events in sports and being quick to act is key. At -450, this is still half the price of the -950 on FanDuel and this is locked and loaded.

One of a few sources I have has said the Lions are narrowed in at receiver and love Chase and Waddle, in that order. With Chase unlikely to be on the board, look for Waddle to be the pick. Waddle is going to the Lions in 21% of mock drafts per NFL Mock Draft Database. The risk here is a team led by an analytics guru with a depleted roster is a prime trade down candidate.

Best way to bet it: Jaylen Waddle Under 11.5 +108 FanDuel Sportsbook

Additional bets: Trey Lance over 6.5 — This is a risky bet, because of the trade-out possibilities, but if 4-6 stay home and want to take a blue-chip player, there is a strong chance he falls out of the top six.

Slater has seen his juice climb all the way to -132 to go under 10.5 on DraftKings and has a chance to be the pick for the Panthers, Broncos, Cowboys or for a team like the Chargers or Giants to trade up to come get him. He is an elite prospect heading into a league desperate for offensive linemen.

Additional bets: The sooner Slater comes off the board the sooner a run can start on tackles if you are looking at over 6.5 offensive linemen drafted.