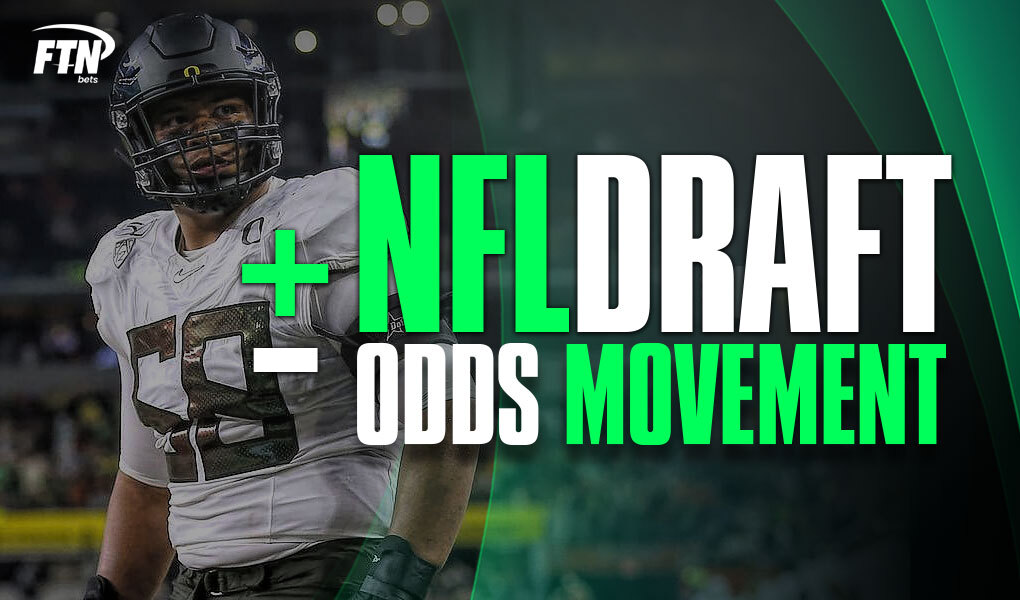 FTN's Eliot Crist looks at the odds that have shifted the most in the lead-up to next week's NFL draft to find places where betting opportunities have changed.

The 2021 NFL Draft market odds move faster than Usain Bolt, and it’s important to be able to adjust accordingly. One of the biggest things to understand is when you’ve missed the boat and it's time to go home. Don’t chase it. Unlike a game where a line might move from 6.5 to 5.5, players numbers moving from say 13.5 to 12.5 can suck all the value out of the number as you just lost one of your outs. With long shot bets, they are called that for a reason, something dropping from +800 to +600 implies just a 3% jump in probability but costs you big time on the payout.

Let’s examine the biggest odds movers in the lead-up to the draft and if there is any value in the new number.

The third overall pick is currently the most bet-on event for the draft. Why? Because of the intrigue and excitement surrounding the unknown that is the 49ers plan for quarterback. Odds seemingly shift from Mac Jones to Justin Fields being the favorite on a daily basis. Currently, Jones is the favorite again. One of the biggest sentiments among draft pundits is that the 49ers have done an excellent job keeping their plans in house. With so much uncertainty why lay heavy juice? The value in this number for Jones is gone, and it is best to let it go. Those of you who subscribe to FTN and use the NFL Bet Tracker, congrats on having Jones under 18.5; you may never get better closing line value again in your life.

Parsons is dropping like a rock. That’s an uncreative saying, but it applies nonetheless. Parsons plays a nonpremium position, with concerns he is better as an athlete than he is in coverage, and has off-field concerns. 10.5 was a bad line, as was 11.5, and I have already gotten 3 units down combined across both numbers. While I won’t be adding any more, I still think this is a bettable number as I don’t see him going top 15. He is competing for those spots with five quarterbacks, Kyle Pitts, Ja’Marr Chase, Penei Sewell, Patrick Surtain, Jaycee Horn, Rashawn Slater, DeVonta Smith and Jaylen Waddle, whose numbers are all lower than Parsons’, and that is already a whopping 14 players. While the bet is not nearly as strong, you can still bet on him going over 13.5.

6.5 was, is, and always will be a bad line. It’s an implied probability of just 52% when mock drafts had him going under 6.5 nearly 80% of the time, with both the Dolphins and Bengals being extremely realistic landing spots. The one scenario he fell out of the top six was four QBs in the first four picks, Sewell at 5, and Pitts at 6, but that seems highly unlikely at this point. I would rather bet Chase at under 6.5 at -200 right now than Chase under 5.5 at -112, however the best way to bet Chase is to the Bengals at +175 as I wrote in my latest 2021 NFL Draft Odds - Best Player Prop Bets, and Jeff Ratcliffe, Brad Evans and I debated Chase in the last Fantasy Happy Hour.

What changed? Gregory Rousseau’s pro day is what happened. While Phillips should offer all-world athletic ability, his Miami teammate had a concerning three-cone time, one of the most important athletic barometers when it comes to predicting future success. Rousseau at the time was just +150 to be the first defensive lineman drafted, but has since dropped to +800, while his prop number has dropped from 25.5 to 30.5. The concern around Rousseau has become so real, his agent Drew Rosenhaus actually tweeted that teams are promising to take him in the first round. In terms of first defender drafted, if there weren't health concerns Phillips would be a near lock, but there are. He currently sits five spots behind Paye (21.5 to 16.5) on their respective draft props and the odds dictate exactly that. I loved grabbing Phillips at +350, but the value of the number is now gone.

I wrote up Horn earlier in the week as one of my favorite long shot bets, and there is still value in the number. On BetMGM, Horn has dropped from 10-1 all the way down to 4-1, but DraftKings still has him listed at +700 and behind Micah Parsons despite the fact his O/U is lower than Parsons’ and he is -167 to go ahead of him. HIs odds are also greater than Paye’s despite the fact that he has a prop line of four spots ahead of him. I have said this probably a thousand times, but this is a bad line. He is only +175 to be the first corner drafted and +700 is still tremendous value.

Get all my NFL Draft betting picks here.