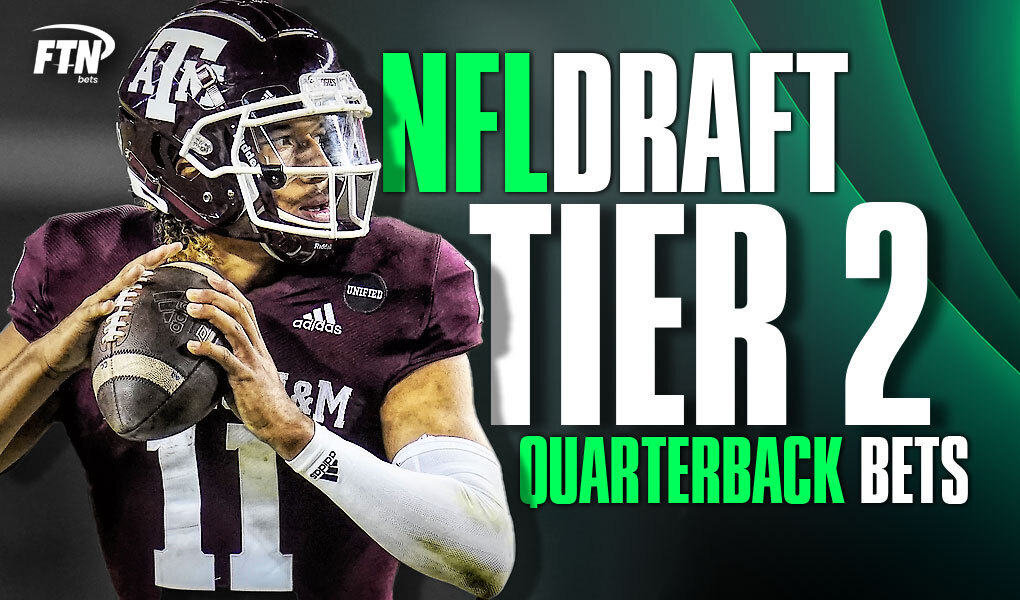 FTN's Eliot Crist reveals some of his favorite bets for the Tier 2 quarterbacks in the 2021 NFL Draft.

While the NFL draft world focuses on who the San Francisco 49ers will draft with the third overall pick in Mac Jones, Trey Lance or now the distant long shot Justin Fields, the opportunity to bet on quarterbacks doesn't end there, it simply begins.

With five quarterbacks projected to go in the first round, it is likely a while before we hear another quarterback's name called with the odds moving of late and currently sitting at -590 to have under 5.5 quarterbacks drafted in Round 1. One of the biggest narratives every draft season is that the quarterback is a later riser and NFL teams want to trade into the back end of the first round to get a fifth-year option. It sounds great with the value of the rookie QB contract, but in reality, NFL teams rarely do it. The last time it was done was for Lamar Jackson and let's not pretend like Mills, Mond or Trask are in the same stratosphere as him as prospects.

Quarterback is the most valuable position in football, no one is ever going to argue that. However NFL teams have shown a priority to go get their guy and if they don’t view him as a franchise-caliber, the last 21 years of data says, they will let him fall.

Mills is currently the betting favorite to be the sixth quarterback off the board, but it is truly anyone’s guess who it actually will be. He has raw talent, but an extensive injury history, with just the second-fewest pass attempts in the class. If he beats this number, he will be the highest-drafted QB6 since Colin Kaepernick in 2011, only the second QB this century to go to 70 as QB6, with only two going top 76.

Trask also has injury concerns and his number has already dropped from 68.5 to 75.5, but there is still value in the number. If he goes under this number, it is a safe bet that Mills would then go over, as even in 2011 when six quarterbacks went top 36, the next one didn't go off the board until pick 76 in Ryan Mallet.

The sportsbooks gave us a gift with a 68.5 and 91.5 middle opportunity on Mond earlier in the week, which is one of the many bets currently in my FTN Bet Tracker. For that middle to hit, we are really hoping for him to be QB6 off the board. While he may be, he could also easily be QB8 off the board which would make his current over 75.5 an extreme value.

When I am looking to bet, data will always take priority over narratives. So the data says all three of these guys are likely to fall, but there is positive expected value in taking the over on all three and letting the chips fall where they may. The highest likelihood is that at least two of these guys go over their number to win you money, with a strong chance all three do. Losing all three bets would be an unheard of run on quarterbacks, as we have never had seven quarterbacks go in the top 75 and only once had a QB6 go top 70.

(Get all my NFL Draft betting picks here)