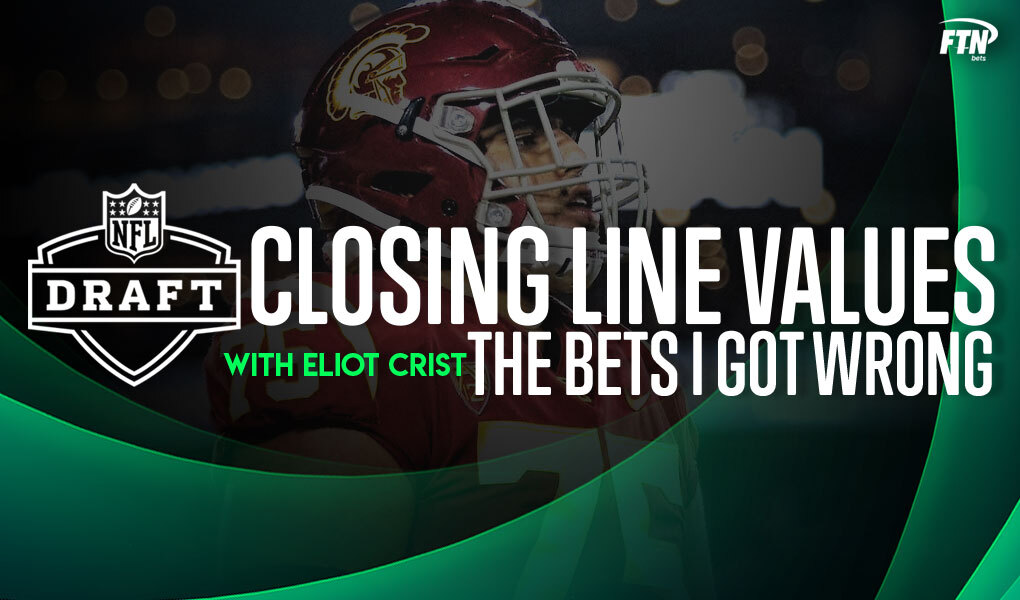 FTN's Eliot Crist highlights the NFL Draft bets whose lines have moved against him since placing them, and what that means about the overall draft betting process.

Closing line value is an amazing barometer of if you are holding a valuable ticket going into an event. When you beat the closing line, you have CLV, or closing line value — your implied probability to win your bet is greater than what the closing market dictates. While my closing line value for the NFL draft has been insanely good — currently 66 of my bets have moved in my favor including all nine of my two-plus-unit bets — I didn’t win them all. Eleven lines moved against me, and part of being a good bettor is understanding why and how to avoid similar mistakes in the future. Here are the 12 bets that moved against me, what happened, and if I would still bet them.

This bet was made in early February, when books’ numbers were all over the place. I was able to grab Zach Wilson at -180 to be the second overall pick and essentially freeroll it with his only true competition at the time. This bet is currently drawing dead and is not one I would make currently, but at the time was the perfect hedge to my Wilson ticket.

Just a few days after betting this, the line dropped to +200. Chase is said to be one of two players Miami covets — the other being Kyle Pitts — and at the time was going in 38% of mock drafts to the Dolphins. It seemed like a valuable ticket if they didn't trade out, but then San Francisco made an offer they couldn’t refuse and now this ticket is drawing dead with the 49ers locked in on a quarterback. Trades are always possible but are normally talked about more than they happen, I bet against a trade and lost — it happens.

Both of these lines moved against me and for good reason. A massive shift has taken place among industry insiders in their mocks, with the Bengals moving from commonly selecting Sewell to commonly selecting Chase. The organization was said to be very high on Sewell, but leadership stepped in and decided on Chase. The situation changed and I was left with a bad ticket but was able to grab Chase to Bengals at +175 to cover my basis. I wouldn’t be either of these tickets now.

This line has moved to +205 across sportsbooks, so it’s not much of a difference, but what I was able to do after this line moved back to Justin Fields being the favorite was bet Jones and half the unit size of +150 to be the third pick. I essentially freerolled Jones not being the pick at 3, and it’s a ticket I am very happy to be holding right now as I still lean Trey Lance will be the pick — but I am very happy I am freerolling it.

This has moved to +1200, but this was never a bet that they might select Sewell. This was simply a trade-down scenario where the Broncos, Patriots, Bears or Washington paid the price to come up and get their guy. If they did, the Falcons would be in prime position to draft either a corner or offensive lineman — which are the two biggest needs this team has in my opinion. I think the odds of them trading out have dropped significantly and would no longer place this bet.

This was a hedge on Chase under 6.5 where I thought the Bengals would be going Sewell and Chase would be the Dolphins pick. I only put half my wager on Chase under 6.5 and it was truly a “Chase to the Dolphins” pick with protection that somehow he went 7. I feel very confident Chase is the pick at 5 and would no longer make this wager.

Bateman’s line is now available at 28.5, and it’s a bet I like as well. He is one of the five receivers I feel very confident will be going in Round 1, with Chase, Jaylen Waddle, DeVonta Smith and Elijah Moore the other four. Bateman has the advantage over the rest of the class with being an X receiver and competing with slot receivers for the back half of the first round. Having that No. 27 pick in the Baltimore Ravens — who per the odds are most likely to go receiver — makes me still feel like I have a winning ticket, despite the odds moving against me.

I talked about betting strategy for Day 2 quarterbacks and why I expected the lines to move, but ultimately I am not concerned. With just one QB6 going top 75 this century, people continue to overreact to the week of the draft reports — that a sixth QB might sneak into the first round. Mills’ number is at 68.5 still at most books — but at 60.5 on BetMGM where I added another half unit — while Trask has dropped to 72.5. I would still confidently bet both overs.

Get all my NFL Draft betting picks here.