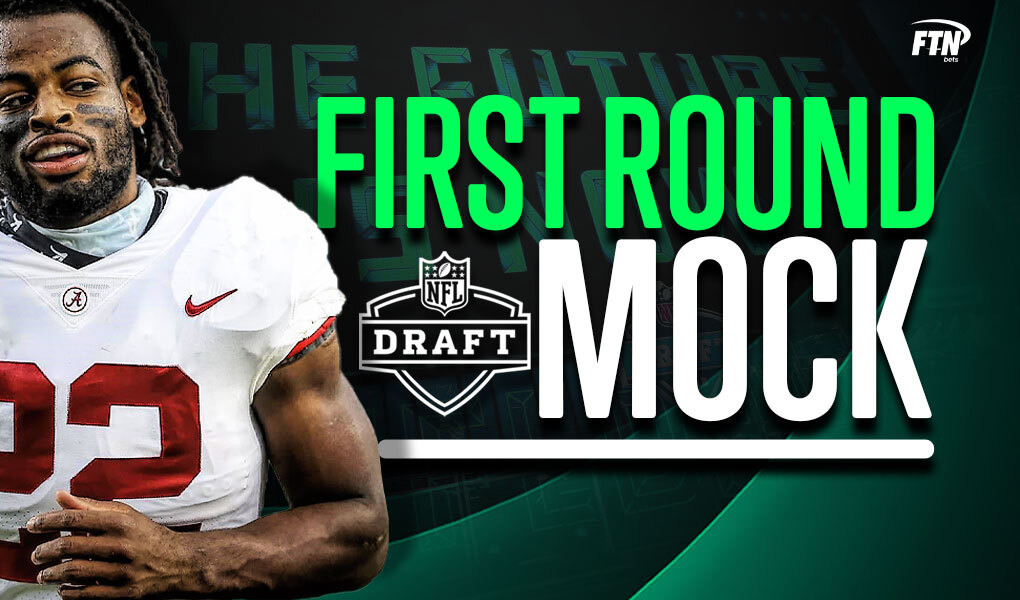 FTN's Eliot Crist runs through what he expects to happen in Thursday's first round of the 2021 NFL Draft.

Draft day is finally here. It has been a long road, but it is in fact finally here. No new information should come out prior to the draft and what does is likely smoke. It’s time for my final mock draft of what I think is going to happen on the day of the first round of the 2021 NFL Draft.

Lawrence currently sits at -10000 to be the pick. If you want a 1% return on your entire bankroll, it is a lock.

Anyone else just excited for them to make this pick? Lance is currently +300 to be the pick with Mac Jones being the heavy favorite. It could easily be Jones, but I will go with my gut and take Lance. All the betting value at this point is gone from this pick.

Both Jeremy Fowler and Dan Graziano of ESPN have reported the Falcons have made up their mind and are taking Kyle Pitts. He sits at -205 to go under 4.5 on FanDuel Sportsbook, amazed the line hasn't moved more after this report.

Chase is as high as -200 to be the fifth overall pick in the draft and has seen steam that past two weeks that suggests he is locked into the five spot with the Bengals. The best of the betting numbers are long gone.

Waddle is said to have passed Smith as the favorite weapon of Miami and his player prop line has dropped from 11.5 to 9.5 the past two days. He down to just +175 to be a Dolphin, so the betting value is gone. If you want to get the best possible line, he is -110 on BetMGM to be a top-10 pick as they forgot to adjust that line despite moving him to O/U 9.5

The Chargers have said they feel they are an offensive tackle away from being a real contender, and Justin Herbert has been campaigning for Sewell all offseason. The Chargers have dropped from +1100 to +650 in the last week to be the team that lands Sewell. I feel like seven is the most likely pick to be traded in the top 10 as the Lions just invested the second-most resources in the NFL into their analytics department.

On FOX Bet, it’s between the Panthers and Broncos as Slater’s most likely landing spot. If Slater goes at 8 instead of Horn, I think Horn goes here.

With Horn off the board, this might be the easiest pick of the mock. Unless both go ahead of the Cowboys, one of Horn or Surtain will play in Jerry world.

Smith is the betting favorite to be the pick and matches Dave Gettleman’s style of wanting great football players and ignoring a lot of other factors. Smith would give the Giants a top five set of weapons in the NFL.

12. Chicago Bears (Trade up with Philadelphia)

Bears fans get excited for Justin Fields and end up disappointed in Mac Jones. If Jones doesn't go at three, the Bears are said to be very high on him and could make the move.

After trading back and adding more capital, the Lions take a swing on the massive upside of Phillips. His under 19.5 is one of the better values on the board.

The Vikings may look to move down, if they don’t the pick likely comes down to Vera-Tucker or Christian Darrisaw.

This is the steal of the draft, as the Patriots have the second-best quarterback fall into their lap. The betting line on DraftKings Sportsbook now has the Patriots as the most likely team to land Fields.

The Cardinals may get aggressive and try to move up for a corner or they may look to take Micah Parsons, but Newsome would be a massive add to this team. I still really like his under 24.5 line.

This is a dream scenario for the Raiders, who need to put resources into their offensive line. This is likely Darrisaw’s floor.

The Dolphins just miss on Darrisaw and Vera-Tucker and add a talented edge defender.

This is the shocker of the draft, as Davis ends up as the first linebacker drafted, currently +1000 on DraftKings. He is going to go higher than people expect, and Parsons could easily slip with his off-field issues.

20. Philadelphia Eagles (Trade down with Chicago)

The league is said to be in love with him and I expect him to go in this range. Eagles add a much-needed playmaker.

The Colts have built their team in the trenches and need to replace Anthony Costonzo. Jenkins would be a home-run pick here for them — per the odds, they are most likely to take an offensive lineman.

The team that was 31st in pressure rate last season needs help getting after the passer and the top four receivers and top three corners are all gone. Still a solid bet they go defensive line at +500, though.

Bateman would be a perfect complement to Davante Adams, and the Packers jump multiple teams that could be looking to add weapons. The Jets’ targets are gone here, so they take the value of the trade back.

Parsons is supremely talented, and the Jaguars have enough picks to take a shot on his upside. His off-field concerns cause him to fall this far.

With size and 4.2 speed, Stokes has been flying off the board and give the Browns a crazy athletic pairing on the outside.

The Ravens have tried to utilize the slot with Willie Snead and Devin Duvenay, but they add real playmaking to the position here to give Lamar Jackson a much-needed weapon.

Farley has back problems that have caused him to slip in the draft. His player prop has dropped six spots, but the Saints are said to be willing to take the risk.

The Jets need interior offensive line help more than anything else, and Joe Douglas builds through the trenches. I love them still getting +400 for their second pick to be an offensive lineman.

The Bills are now most likely to take a running back per the odds, and Etienne’s number has dropped from 36.5 to 30.5, giving credence to the idea that if he is there the Bills won’t pass on him.

The Ravens miss Marshal Yanda, and a talent like Dickerson with his versatility would be an awesome addition.

The Bucs have caught some steam dropping from +800 to +550 to draft a running back. This team returns all 22 starters without any major needs, and all of their backs have contracts that expire next year. Would shock a lot of people, but I think it could happen.