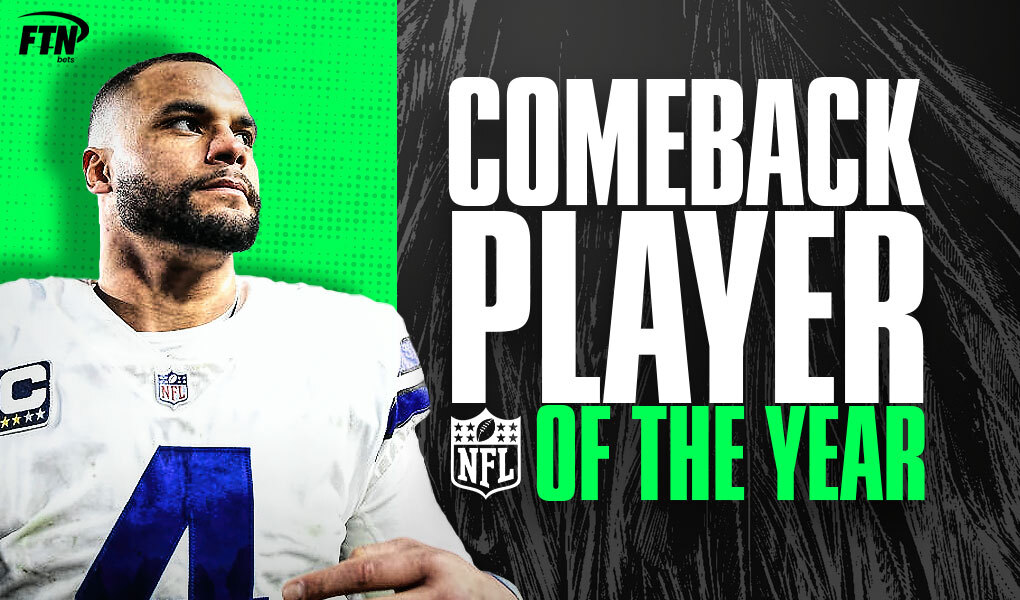 NFL Comeback Player of the Year Odds and Picks

FTN's Eliot Crist looks through the odds to win the 2021 NFL Comeback Player of the Year Award to find the best best to place.

The NFL Comeback Player of the Year is given to the player who overcomes shows perseverance in overcoming adversity to return to form on the field. Some years, this award is locked up before the season even starts — last year, for example, the minute Alex Smith returned from his leg injury that almost took his life, he was a shoo in for the award. When Eric Berry returned from cancer, there was no way he wasn't taking that award home.

This year we don’t have a situation as serious as those, though we do have two quarterbacks coming off gruesome leg injuries in Dak Prescott and Joe Burrow.

The Comeback Player of the Year Award, like many football awards, has turned into a quarterback award. Since 2008, nine of 13 award winners have played quarterback, two have played receiver, one tight end and one defender — the aforementioned Eric Berry, returning from cancer. This is such a difficult award for a non-QB to win that, when looking at the betting field, eliminating non-quarterbacks from the conversation entirely gives a ticket far more likely to cash. People like to tell themselves a story, pitch a narrative on why a defensive player could win the award, or how someone like Saquon Barkley or Christian McCaffrey could win the award despite only one running back winning the award since 1997. With a quarterback like Burrow having longer odds at +700, it makes sense not to chase outliers for narrative purposes.

Per DraftKings Sportsbook, these are the current betting odds for the Comeback Player of the Year candidates.

Dak Prescott is the heavy favorite for the award, and rightfully so. He was on pace to break the single-season passing yardage record before his broke his ankle against the New York Giants in Week 5. He has arguably the best trio of receivers in the NFL in Amari Cooper, CeeDee Lamb and Michael Gallup, and his offense line is set to be healthy again this year. As a top MVP candidate in an elite offense, with a subpar defense inflating his numbers — a Prescott return to form should lock up the award, and if the Cowboys are able to make the playoffs it will be very hard for anyone to take it from him.

The bet: 1.5u Dak Prescott CPOY

Joe Burrow was the front runner for the NFL Offensive Rookie of the Year before he broke his leg against the Washington Football Team in Week 11. On track to be ready for the regular season, Burrow will have a new weapon at his disposal this year in Ja'Marr Chase, the fifth overall pick in the 2021 NFL Draft and the highest-drafted receiver since Corey Davis went No. 5 in 2017. Chase gives the Bengals three dynamic receivers and Burrow all the weapons he needs to have a monster year. If both quarterbacks return to form, it will be Prescott’s award to lose, but Burrow makes for a nice hedge off Dak where you are covering the top two options for the award and getting good odds to do so.