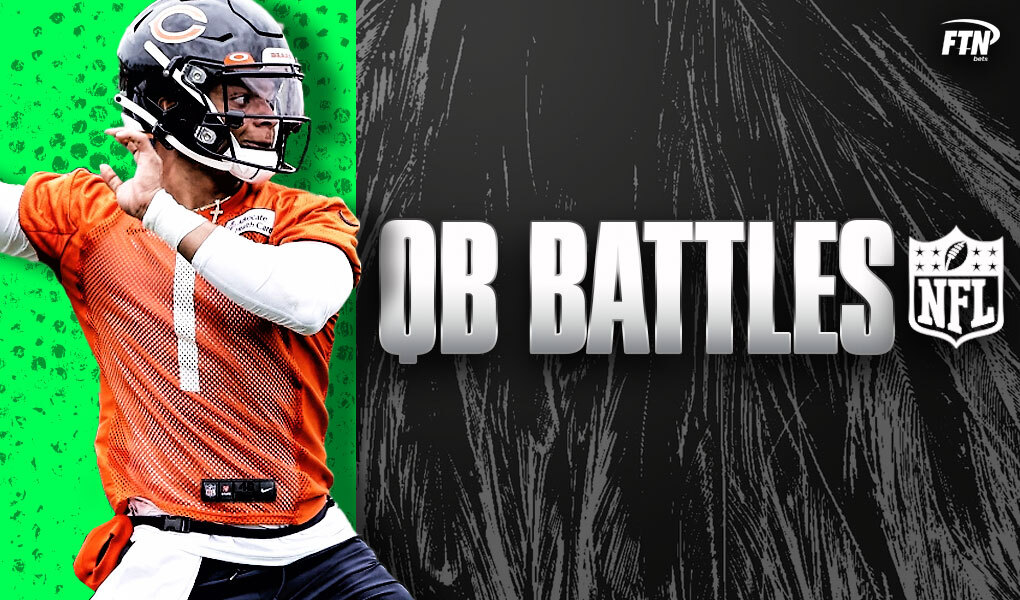 FTN's Eliot Crist takes a look at the quarterback battles across the NFL to determine who he will bet to become the opening day starter.

There is no more important position in sports than an NFL quarterback. The age-old saying is if you have two quarterbacks, you really have none. Getting the decision right for who is the starting quarterback is the key to a team's chances of having a winning season or looking for a new one come draft day. Right now the Denver Broncos, New Orleans Saints, Chicago Bears, San Francisco 49ers and New England Patriots have quarterback battles going on and on FanDuel and Draftkings Sportsbooks you can bet on who will be the opening day starter. There are some values to be had out there - so let's take advantage of them

Right now Jameis Winston is the favorite over Taysom Hill, despite Hill being the true backup last year and starting games when Brees went down with an injury. Hill also had the bigger contract - signing a whopping 140 million dollar deal this offseason. Important to note that the contract number is inflated with very little guaranteed money. Hill, who is 31, won three of four games last year and completed 70% of his passes for 834 yards and four touchdowns with two interceptions. Hill is a dynamic athlete, but lacks true upside as a passer - don’t tell Sean Payton that though, as he has been infatuated with him for years. Winston signed a one-year, $5.5 million contract (backup money) but has the much stronger pedigree as a passer. Winston is currently set as the favorite, but with the contract money on Hill’s side, Payton's past infatuation with Hill, and the fact that the Saints called his number before Winston’s last year, this is much more of a true toss-up competition that the odds dictate. While DraftKings opened HIll at +220, he was bet down to +145, however, on Fanduel Sportsbook, you can still get +220 odds. That is an implied 31.3% probability that HIll is the starter when the true odds are closer to a coin flip - making it a bet worth taking advantage of.

Bears' future is bright at quarterback

The Bears signed Andy Dalton this offseason and told him he was going to be the starter. Then on draft day, they traded up for Justin Fields and added the dynamic quarterback to the roster, giving Bears fans hope at the quarterback position. The last time the Bears promised a veteran QB he would be the starter was 2017, when they then traded up for Trubisky and Glennon never started Week 1. Things change in the NFL and while Nagy insisted in May that Dalton will be the starter, there is a night and day talent gap between the two, and Fields has hit his stride early in camp and with preseason games and a full training camp, he should blow the doors of Dalton. The Bears open the season on primetime football against the Los Angeles Rams and you can bet the NFL wants Fields to be making his debut, not Aaron Donald to be pummeling Andy Dalton.

49ers turn to Trey Lance, but when?

No quarterback in the modern era who was drafted top three did not start in his rookie year. Of course, this bet is not if Lance starts at some point, it is about if he starts Week 1. 49ers general manager John Lynch said this on the Colin Cowherd show regarding Trey Lance, "But the nice luxury that we have is we don't have to rush it. He can play when he's ready to give us the best chance, and that will be on Kyle. I think it will be fairly obvious when the time's right, and I think, at that time, he'll be our guy." The question will become how quickly will that happen. ESPN's Todd McShay and the NFL Network's Daniel Jeremiah said after the draft that they thought he was the most likely quarterback outside of Lawrence and Wilson to start Day 1. HIs Rookie of the Year odds opened as high as +1,600 and are now down to +600. There has been steam that he will get this job earlier than people think, and while I think he will be starting by Week 4, I am not ready to pull the trigger yet.

Aaron Rodgers to the Broncos?

Teddy Bridgewater vs. Drew Lock vs. the Unknown

Aaron Rodgers currently sits at -200 to be on the Packers roster Week 1, but the Broncos are considered the most likely team to acquire him should he be moved. The amount it would take to get him, combined with all the draft picks coming makes this trade a difficult one to pull off. It's far more likely the Packers play hardball as long as they can instead of cutting bait with the league's MVP. That leaves Bridgewater vs. Lock for the camp battle. While the Broncos only traded a sixth-round pick for Bridgewater, I favor him over Lock. Bridgewater is accurate and safe with the football, something that will be attractive to head coach Vic Fangio, who has built a strong defense and has playmakers on offense who can elevate a quarterback. Drew Lock ranked sixth in interceptable passes last year and 42nd in catchable pass rate while Teddy Bridgewater ranked 15th in interceptable passes and seventh in catchable pass rate. I favor Bridgewater here and like him at +145.

Yes, Mac Jones is a pro-ready quarterback and yes, Cam Newton only signed a one-year deal with the Patriots. However, they built this team in the offseason around Newton’s strengths. They added multiple tight ends to run more 12 personnel and added a vertical threat in Nelson Agholor. This is the same personnel group that Newton thrived with in Carolina and gives him his best chance to succeed. His leash will be short, but he should still get the start of the season. He currently sits at -270, an implied 73% probability, which is about right. While I think Newton will be the starter, I am not willing to pay the juice.