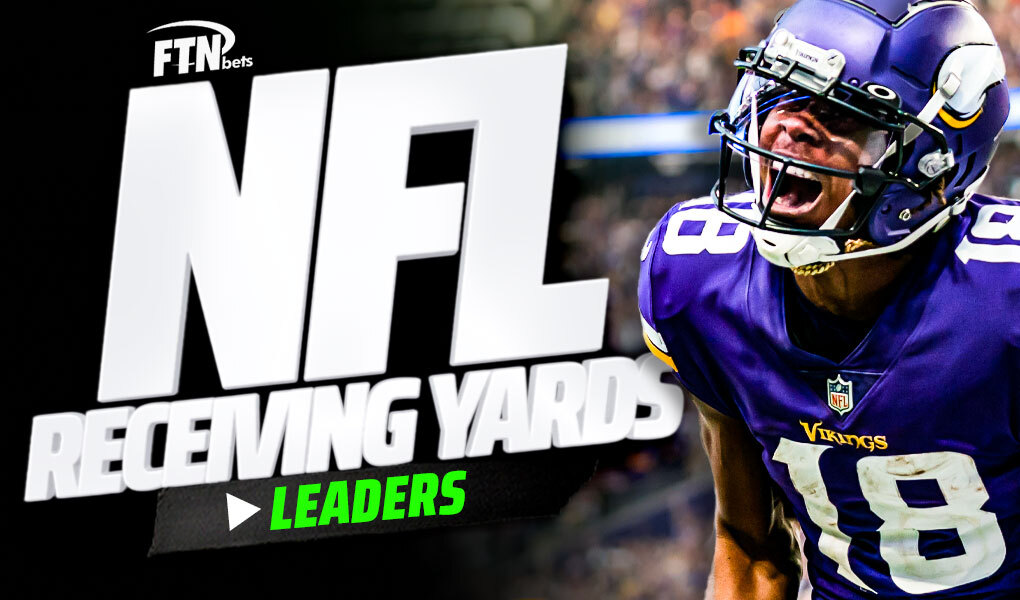 FTN's Tony Riccobono breaks down the odds and best bets for who could lead the NFL in receiving yards in 2022.

The race to be the 2022 NFL receiving leader might come down to two players down the stretch of the season. Tyreek Hill is the betting favorite to win the prop bet for most receiving yards, and Justin Jefferson isn’t far behind.

Hill is favored with -135 odds (57.45% implied probability) at DraftKings Sportsbook to be the 2022 NFL receiving leader. Leading the league with 1,379 receiving yards in 12 games, Hill is averaging close to 115 yards per game.

Jefferson is a close second with +175 odds to be the 2022 receiving yards leader. The Minnesota Vikings star has 1,277 receiving yards through Week 13 and has already set the record for most receiving yards in the first three years of an NFL career.

Stefon Diggs is a distant third with +800 odds to have the most receiving yards in 2022. The Buffalo Bills star was the 2020 receiving leader, and he’s third in the league with 1,202 yards after Week 10.

Let’s take a look at the favorites to be the 2022 NFL receiving leader and the best bet for this WR prop bet.

Who Will be the 2022 NFL Receiving Leader?

Below are the odds to lead the NFL in receiving yards in 2022, per DraftKings Sportsbook.

Why is Tyreek Hill Favored to Have the Most NFL Receiving Yards in the 2022 Season?

Hill is the odds-on favorite because he has 102 more receiving yards than anybody else. Hill has at least 143 receiving yards in six of his first 12 games as a Miami Dolphin. Hill ranks first with 96 receptions and second with 129 targets. He’s caught at least six passes in all but two games this season. Hill is 8th all-time in receiving yards per game, and he’s blowing away his career average in Miami.

Hill has proven that he doesn’t need Patrick Mahomes to be one of the league’s most productive receivers. The veteran went for 177 yards while catching passes from Teddy Bridgewater and Skylar Thompson in Week 6. Even when Tua Tagovailoa had his worst game of the season in a Week 13 loss against the San Francisco 49ers, Hill caught nine passes for 146 yards. It’s going to be difficult for anyone to catch Hill in the final month of the 2022 campaign.

Now that only nine players are on the board at DraftKings for most receiving yards, Adams has the most value. All of the long shots with more than +1000 odds are at least 400 yards behind Hill and have virtually no chance to make up that ground. Adams only has 26 fewer yards than Diggs, who could potentially rest in Week 18 if the Bills are locked into their playoff positioning.

The Las Vegas Raiders won’t have any reason to sit Adams, who has arguably been the NFL’s most productive receiver for close to a two-month period. Adams is averaging 132.8 yards in the last five games. If you eliminate an outlier three-yard performance when the Raiders were shut out in New Orleans, Adams is averaging 123.0 yards over an eight-game span. A soft schedule might allow Las Vegas to keep winning and stay in the playoff hunt while Adams continues to put up big numbers.

If you’re confused about how to bet on the NFL receiving leaders, FTNBets is here to help. In order to place a wager, bettors must first create an account with a sportsbook that operates in their state. Once you’ve deposited money, you can bet on this wide receiver prop.

When you visit the NFL player futures section of a sportsbook, the odds should look something like this:

The numbers next to each player represent the odds for the prop bet, as well as the payout for a winning $100 wager. The player with the lowest number is the favorite. In this case, it’s Tyreek Hill.

A $135 bet on Hill would result in a $100 profit if he finishes the season as the receiving yards leader. That means $235 would be credited to your account, including the $100 profit and the $135 you wagered on the bet.