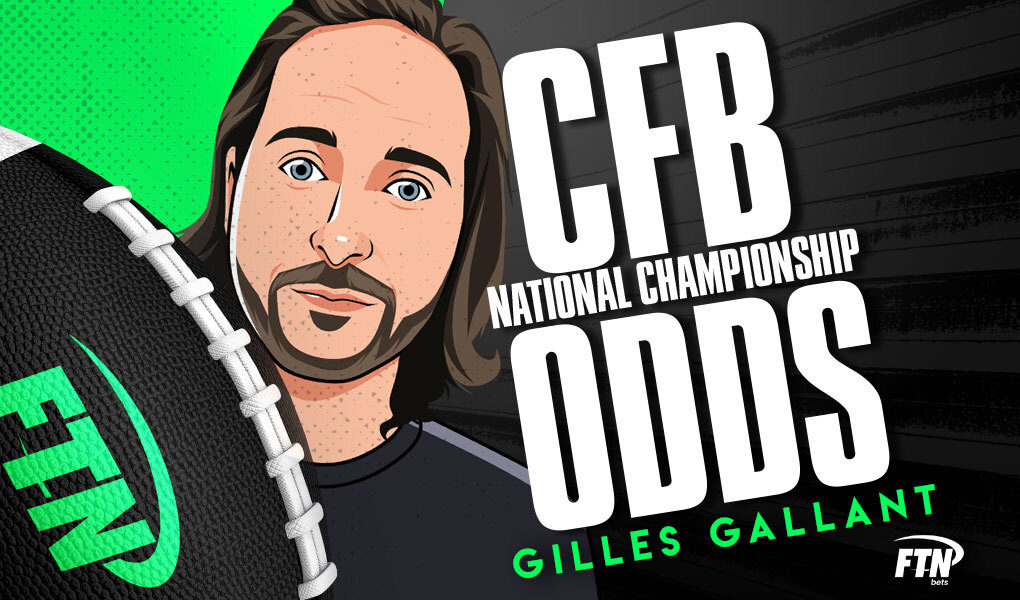 FTN's Gilles Gallant runs through some of the key odds for college football's National Championship this year and picks out his favorite bet.

Alabama sits at +250 for odds - at places like BetMGM Sportsbook –  to win the NCAA college football championship and continue its winning pedigree since head coach Nick Saban came to Tuscaloosa. ‘Bama is coming off an undefeated season at 12-0 and crushed the Ohio State Buckeyes in the final of the College Football Playoff.

The Crimson Tide will unveil almost a whole new offensive wave of players after many left for the 2021 NFL Draft and the second team on the list for college football championship odds feels that pain in the Clemson Tigers. The Tigers are +400 to win the NCAA Football National Championship and will try to begin a new chapter after star quarterback Trevor Lawrence left for the draft.

It’s a lot of the usual suspects after these two teams for NCAA football title odds like the Georgia Bulldogs (+500), Ohio State Buckeyes (+600) and Oklahoma Sooners (+600), who make up the rest of the top five teams on the oddsboard. Those teams have routinely been featured in the College Football Playoff since its inception for the 2014-2015 season, and there’s a big jump in odds for the next team on the list. The odds take a massive jump after those five teams with the Iowa State Cyclones listed at +2500.

Let’s break down why Alabama is the favorite again and whether they’ll add another NCAA National Championship trophy to the mantle or fail miserably (unlikely).

Odds are courtesy of BetMGM Sportsbook.

Why is Alabama the favorite for college football championship odds?

Another year, another round of high-level recruiting for the Crimson Tide. One of the main reasons this program remains at the top of college football championship odds each year is their instrumental way of identifying the next wave of generational football players. The Crimson Tide just had an exodus of first-round NFL talent that you would expect to cripple any other college team, but Nick Saban’s group embodies the “next man up” mentality. It also helps when each recruit that comes in is a high school All-American and ranked near the top for their respective position.

Well, Alabama is bringing in seven five-star recruits and 15 four-star recruits to an already well-established program. Two notables come on the offensive line to provide max protection of the backfield in JC Latham, the second-ranked recruit in the country, and Tommy Brockermeyer, the No. 5-ranked recruit in the nation. The Tide had the second-best recruiting class in 2020 and the best in 2019 which means those players are now ready to jump in and make a name for themselves on the biggest stage.

Losing quarterback Mac Jones will obviously be difficult to overcome, but Saban has led his group many times before with an average quarterback but that likely won’t be the case in 2021. Alabama is rolling with second-year quarterback Bryce Young, who was the second-best recruit from the 2020 class and should be helped immensely with the offensive line being stacked and having two wide receivers who have already played in big games. John Metchie III and Slade Bolden were impactful on last year’s team and now get to be top dogs in this offense.

Looking at the Tide’s schedule this season, it’s easy to tell why they have +250 odds to win it all. They likely won’t be an underdog in any game they play in, home or away. Do they have some tough games on the schedule? Of course. They still play in the SEC but even then, I doubt they falter. Their toughest games this year are on the road vs Florida, Texas A&M and naturally, the Iron Bowl vs Auburn to close the season. Auburn may be the one that could trip them up just because of homefield advantage and if QB Bo Nix finally manages to live up to his potential but that’s a big if.

Truly, if Alabama takes care of business and all of their recruits come in ready to play, there’s likely no team stopping them but if they falter, there are a few teams ready to step in and perhaps make a run for NCAA college football championship odds. One team in particular I have my eye on is the Iowa State Cyclones.

I know the internet would break if a team like Iowa State won a title, but it’s not as far-fetched when you consider all the variables. They have a lot of things going for the program that should at least put them at the top of the Big12 and into the College Football Playoff.

The first thing that stands out is who is coming back, and frankly, it’s almost everyone. Ten of 11 players on defense are upperclassmen, Charlie Kolar might be the best tight end in college football, and Brock Purdy has shown flashes of quality quarterback play.

In the Big 12, the two teams you always have to contend with are Oklahoma and Texas, but I think those programs are a bit overhyped on past performance. Look, I’m not saying Sooners QB Spencer Rattler won’t improve from last season, but he looked lost at times in his first year starting with Oklahoma. Obviously, he balled out in the Cotton Bowl vs. Florida, but unless he improves his accuracy, the Sooners won’t run away with the conference like they have in previous years. This opens the door the Cyclones to potentially win the Big 12 and potentially be in the playoff and really, that’s all you need when banking on a team with +2500 odds to win it all.

The time has come where you want to place a bet on a team to win the NCAA College Football championship, but when you look at the list of the teams, the numbers beside them are hard to understand. Well, here at FTNBets, we’ve done the leg work for you so you can understand the betting odds for college football futures.

After you’ve set up a sports betting account with a reputable sportsbook and deposited money, when you got to college football championship odds, the betting lines should look like this:

The numbers listed beside each team are for American odds with potential payouts determined based on $100 bets. The team with the lowest number or odds beside it is considered the betting favorite. In this case, it’s the Alabama Crimson Tide.

Let’s say you believe Alabama will win the college football national championship and you decide you bet $100 on it. If Alabama wins, your sportsbook would pay you $350 for your good pick — your initial $100 bet is returned and the sportsbook gives you $250 in profit.

On the other hand, if you’re looking at Iowa State to win it all, that same $100 would net you $2,600 — your $100 is returned and $2,500 in profits is deposited into your sportsbook account. Our parlay calculator will show you how much you’d win based on the odds and amount bet.