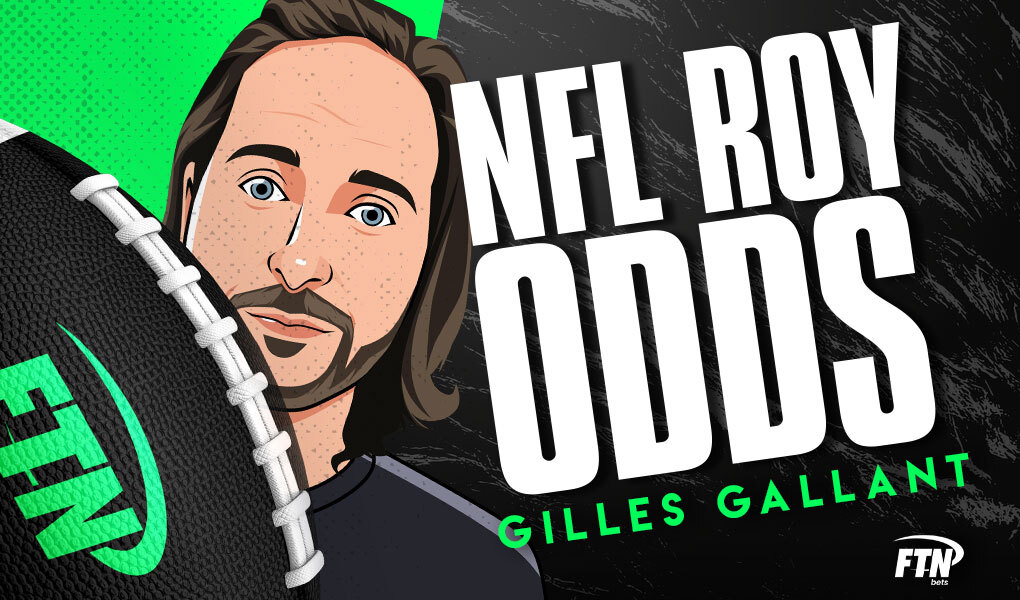 NFL Rookie of the Year Odds

FTN's Gilles Gallant examines the odds for 2021 NFL Rookie Player of the Year and identifies some fo the best bets.

Rookies who enter the NFL can make an immediate impact or take years to develop, but one player with the Jacksonville Jaguars and another with the Dallas Cowboys are projected to explode onto the scene as betting favorites to win the 2021 NFL Offensive and Defensive Rookie of the Year awards.

Trevor Lawrence is +275 favorite for NFL Offensive Rookie of the Year at places like BetMGM and is expected to completely change the losing culture in Jacksonville. Lawrence was the No.1 overall pick in the 2021 NFL Draft and had an incredible career at Clemson, where he led the Tigers to a national championship in 2019 and three College Football Playoff appearances.

On the defensive side of the ball, linebacker Micah Parsons is the betting favorite for NFL Defensive Rookie of the Year and is projected to be a Day 1 starter. Parsons’ nose for the football and hard hits could be exactly what the Cowboys’ struggling defense needs, and the Penn State alum is +500 to win the award.

If you want to bet on either of these NFL futures markets, check out the best sportsbooks available in your state with FTNBets.

Let’s break down why Lawrence and Parsons are the favorites, a long shot to consider and some tips for betting on for NFL Rookie of the Year odds:

Who is the favorite for NFL Offensive Rookie of the Year Odds?

Maybe it’s the hair or the fact that he always looks calm and collected, but Jacksonville Jaguars quarterback Trevor Lawrence looks like he was created in a lab to play in the NFL. The 6-foot-4, 220-pound specimen has been touted as “the one” since taking the field with Clemson Tigers and has done nothing but pile up stats and wins in three seasons as a collegiate athlete.

It might take some adjusting in Jacksonville for the 21-year-old, who is not used to losing but is joining a team that was 1-15 in 2020. If you include high school and college, Lawrence’s teams were an incredible 86-4, and two of those losses were in the NCAA Championship game vs. LSU and then in the College Football Playoff in 2020 vs. Ohio State. The Jaguars are banking that his skillset and winning pedigree will carry them back to respectability. With only one win last season for Jacksonville, the bar is fairly low for improvement.

I’d be remiss if I didn’t at least mention some of Lawrence’s stats from college, which look like video-game numbers on “rookie” mode. He threw for 90 touchdowns, over 10,000 yards passing and 17 rushing touchdowns in three seasons while only tossing 17 interceptions. New head coach Urban Meyer should be able to put him into positions to succeed, and I wouldn’t be surprised if Clemson RB Travis Etienne is utilized significantly with Lawrence to foster familiarity for the rookie. At +275 and having a few cupcake games to start the season, Lawrence’s odds to win NFL Offensive Rookie of the Year could drop significantly if he explodes onto the scene early.

This may seem like a square long shot for odds to win NFL Offensive Rookie of the Year, but Kyle Pitts of the Atlanta Falcons looks like a steal at +1,000. Obviously, no tight end has ever won this award, but Pitts isn’t your average tight end coming out of college. The 2020 John Mackey Award winner and College Football All-America Team player is more of a hybrid wide receiver than a tight end, and his game tape at Florida is already somewhat legendary. Based on hype alone, he’s already a top-five TE in the NFL.

The departure of WR Julio Jones cannot be overlooked for why Pitts is a great candidate for NFL Offensive Rookie of the Year odds. Jones has been the leader in targets in the Atlanta offense for nearly every season he was in uniform which means opportunities have opened up for the tight end to make an impact.

QB Matt Ryan is going to be looking for Pitts early and often in the Falcons offense with his ability to beat nearly any type of man coverage. At +1,000 odds, now is the time to grab him because if he stays healthy, it’s very easy to envision him getting over 1,000 receiving yards and double-digit touchdowns in his rookie season in the ATL.

Who is the favorite for NFL Defensive Rookie of the Year odds?

Why Is Micah Parsons favored for NFL Defensive Rookie of the Year Odds? H2

Dallas Cowboys linebacker Micah Parsons leads the way for NFL Defensive Rookie of the Year odds and is being thrust into a situation where he’ll immediately be asked to step in and contribute. Parsons will be joining a linebacker corps that includes Jaylon Smith and Leighton Vander Esch to deliver the hard hits over the middle. With Sean Lee retiring and Vander Esch missing 13 games over the last two seasons, the Cowboys needed some injury insurance should one of those two Pro Bowlers go down.

Recent college game tape is minimal on Parsons, as he sat out the 2020 college football season to prepare for the NFL but in 2019, he looked like a heat-seeking missile on the field. That type of aggression in the run game along with being able to have lateral ability and match up with opposing tight ends will be crucial if the Cowboys defense intends to improve. The defense in Dallas was abysmal last year but if the Cowboys can get some stops and Parsons is in the middle of the action, his odds at +500 look more attractive.

When getting ready to bet on the odds to win NFL Defensive Rookie of the Year, it may not be wise to take the first defensive player selected in the draft, which is Jaycee Horn at +1,500. While Nick Bosa and Chase Young were deserving of the award in 2019 and 2020 respectively, they may have been outliers considering how this award has been handed out historically.

Since 2000, only six of the 21 players who have won Defensive Rookie of the Year were the first defensive player taken in the draft:

Not saying Jaycee Horn can’t belong in that group but each of those players was an edge rusher that was immediately dominant for his team. It was a sign of things to come with Peppers and Miller, who both went on to win NFL Defensive Player of the Year shortly after.

Bettors should also be aware before wagering on this prop that the award usually goes to a player who was taken in the first round of the draft. Since 2000, only three players to win Defensive Rookie of the Year were not selected as one of the first 32 players in the draft:

That means bettors may not want to stray too far with players on the NFL Defensive Rookie of the Year odds list who slid to the later rounds. For example, players like Jeremiah Owusu-Koramoah (+950) with the Browns or Azeez Ojulari (+1,800) with the Giants will have a historically uphill battle to win this award.