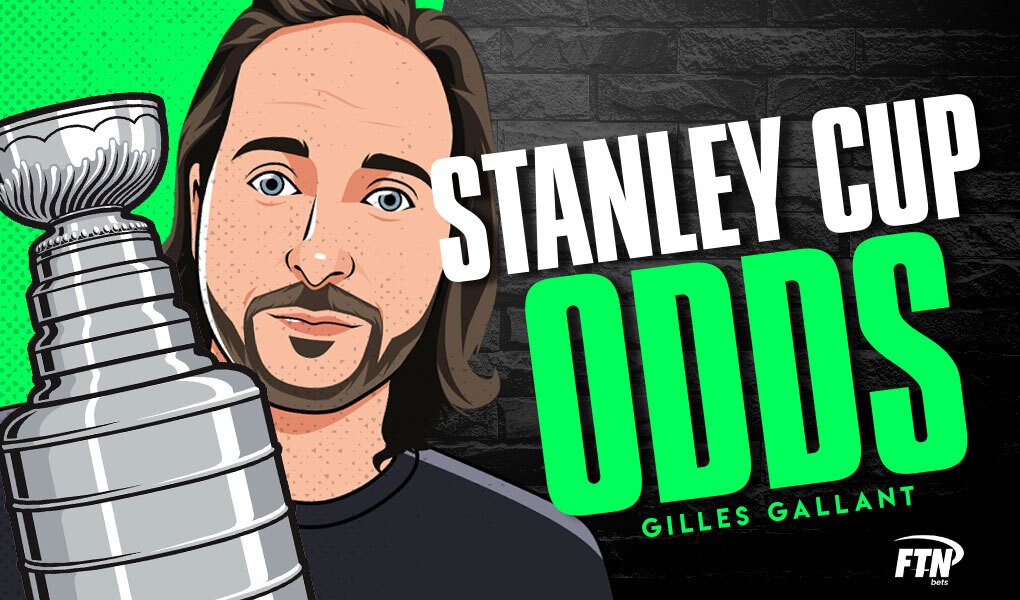 FTN's Gilles Gallant dives into the odds to win the Stanley Cup for the next NHL season and picks out his best bet.

We’ve reached the offseason for the NHL and despite winning back-to-back Stanley Cups, the Tampa Bay Lightning are not the betting favorites to win it all in 2022. Instead, the Colorado Avalanche are tabbed as the top dog by oddsmakers.

According to the latest Stanley Cup odds, the Avalanche sit at +600 to reach their potential and win the NHL title for the first time since 2002. The Avs opened as the betting favorite for odds to win the Stanley Cup last season but fell short during the playoffs, losing to the Vegas Golden Knights, who happen to be the second team on the oddsboard.

As for the Lightning, they’re not too far back of Colorado for the top spot at +750 for Stanley Cup futures. The Bolts likely have to disband some of their key depth this season but should be returning the bulk of their core like Nikita Kucherov, Brayden Point, Victor Hedman and Conn Smythe Trophy winning goaltender Andrei Vasilevskiy.

The Boston Bruins (+1200) and Carolina Hurricanes (+1400) are both expected to be in contention again and round out the top on the oddsboard for Stanley Cup odds.

Let’s break down why the Avalanche are favored and a long shot team that may be able to sneak up and make a run to win the Stanley Cup:

Who will win the Stanley Cup?

Odds are courtesy of BetMGM Sportsbook.

Why are the Colorado Avalanche favored for Stanley Cup odds?

Winning the President’s Trophy for the team with the best record in the NHL last season, the Avalanche are in a prime position again for odds to win the Stanley Cup. The Avs boast a wealth of talent for up front and on the back end and have managed their cap where they can likely bring the gang all back again for another chance to win it all.

Colorado is led by forwards Nathan MacKinnon and Mikko Rantanen — they each averaged over a point per game this season, and Rantanen was top-five in goals scored with 30 on the campaign. Gabriel Landeskog, the Avs captain, is a free agent, but early reports suggest Colorado will be re-signing the 28-year-old captain.

Why the Avs get so much love from analysts and sportsbooks is their defensive core, which is a legitimate top-four. Samuel Girard and Devin Toews are the top pairing, but young guns in Cale Makar and Bowen Byram are up next for puck-moving offensive defensemen that make this Avalanche attack so scary, especially on the power play.

The Avs being in contention and having a top playoff seed won’t be in question, but what will be is their goaltending. Both Philip Grubauer and Devyn Dubnyk are unrestricted free agents and Grubauer is likely expecting a hefty raise after posting a 1.92 GAA, a .922 save percentage while going 30-9 in 39 starts during the regular season.

When it comes to Stanley Cup odds, it’s rarely a good idea to bank on the betting favorite before the season starts. Since 2011, the only preseason favorite for odds to win the Stanley Cup that went on to win it all was the 2017 Pittsburgh Penguins.

The Rangers may not be as talked about as their cross-city rival, the Islanders, but they fit the description as a team on the rise. They have legitimate scoring forwards in Artemi Panarin and Mika Zibanejad, who each can fill up the stat sheet, combining for 41 goals last season.

The part where there’s optimism for the Rangers is banking on the development of top draft picks Kappa Kakko and Alex LaFreniere. The latter was the first overall pick in the 2020 NHL Draft while the former was the second-overall pick in 2019. They both had underwhelming seasons as they were adjusting to the NHL game, but recent history has shown that top picks like that rarely come in and dominate in the first season. Now, with some games under their belt and the Rangers likely continuing to retool, New York could be a team on the rise.

Getting this team at +2500 is a bit of a gamble, but if Kakko or LaFreniere start to live up to their potential and contribute to Panarin/Zibanejad’s scoring efforts, we could see them make a push as an elite team in the East division.

When it comes to betting on NHL Stanley Cup odds, it’s never too early to get your futures bet in when you see some betting value. In order to bet on odds to win the Stanley Cup, you’ll need to set up a sports betting account with a sportsbook and deposit some money. Once you complete that step, you’re ready to be on who will win the NHL title.

When you go to look for Stanley Cup playoff odds, it should look something like this:

The numbers beside each team represent the betting odds for each team if they were to win the Stanley Cup and are referred to as American odds. This equates to how much profit you’d receive for your winning pick if you’d bet $100 on it. The team with the lowest number is considered the betting favorite and in this case, it’s the Colorado Avalanche.

Let’s say you’ve crunched the numbers, looked at your options and decided the Avalanche is the team you want to bet on. If you bet $100 on the Avs and they win the Stanley Cup, your sportsbook would pay you $700 — your $100 is returned and you win $600 in profit.

Try our FTNBets Parlay Calculator to help you determine what potential payouts would be and the amount you need to risk for certain profits.