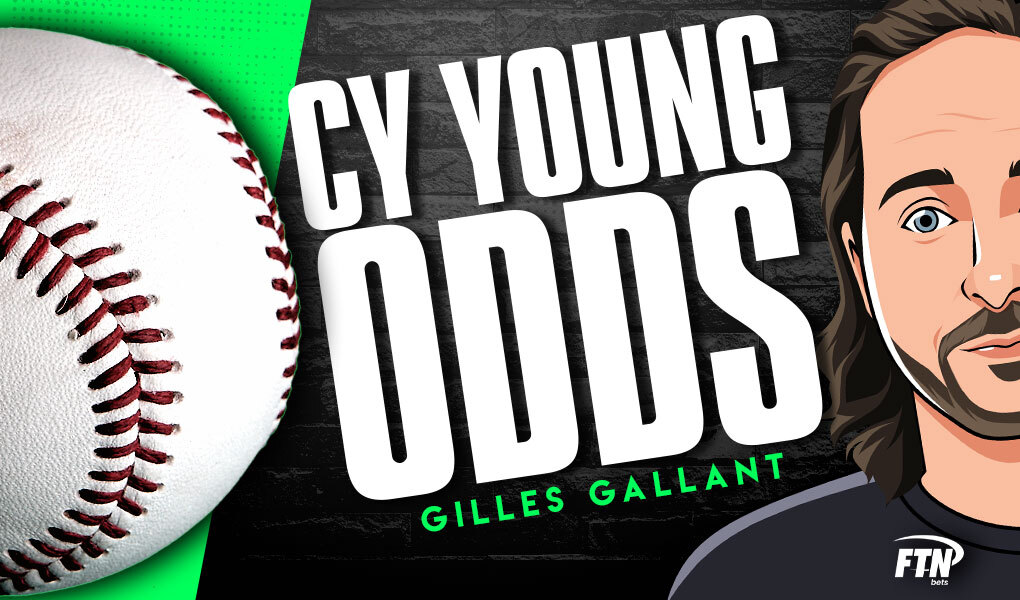 FTN's Gilles Gallant runs through the betting favorites to win the Cy Young Awards in both leagues around baseball in 2021 and picks out some of his favorite bets.

As we get to the final leg of the 2021 MLB season, starting pitching continues to be the linchpin of successful teams and for 2021 Cy Young odds, a pair of flame-throwers from New York are the betting favorites in the American and National Leagues.

According to the latest Cy Young betting odds at BetMGM, the New York Yankees’ Gerrit Cole and the New York Mets’ Jacob deGrom are each odds-on favorites to win these awards. Cole sits at -120 (54.5% implied probability) and opened as the +400 favorite prior to the season. DeGrom, on the other hand, is an overwhelming fave at -800 (88.9% implied probability) to win his third Cy Young award of his career.

The reigning winners in Cleveland Indians ace Shane Bieber (+4000) and Los Angeles Dodgers righty Trevor Bauer (+12500) are still on the list, but Bieber’s ERA is up to 3.23 this season while Bauer is out of the lineup and on administrative leave due to an ongoing criminal investigation.

Let’s take a look at each league’s 2021 Cy Young odds and examine why Cole and deGrom are the betting favorite and if they can be caught before the end of the season from another pitcher:

These are the current betting favorites to win the AL Cy Young on BetMGM.

Although he’s had some ups and downs after the MLB crackdown of substances to aid pitching grip, the Yankees’ Cole has passed the sniff test in 2021 as the best pitcher in the American League thus far. Through 20 starts, the Yankees ace has a 2.74 ERA, 0.97 WHIP and 166 strikeouts in 121 innings of work. The latter leads all pitchers in baseball while the ERA and WHIP are in the top 10 of MLB. These numbers reflect who should be the betting favorite for AL Cy Young odds and Cole is a man among boys.

The 6-foot-4 righty has been dominant in pinstripes and has mostly lived up to the very high expectations of playing in New York following his arrival before the 2020 season. Even with the sputtering Yankees offense providing less run support than Cole and New York fans may normally expect, he is still the straw that stirs the drink for New York’s pitching staff. However, he has been hit-or-miss since the crackdown and his outings have become a bit Jekyll and Hyde.

Prior to the All-Star break, Cole had one of the most impressive outings a pitcher has had this season when he went into Houston and shut the door for a complete-game 1-0 shutout win where he fanned 12 batters and only allowed three hits. That said, in his most recent start in Boston, he looked great early, but the wheels fell off and allowed three earned runs in the fifth innings in a loss.

That’s why I wouldn’t recommend taking Cole at -120, because it’s difficult to anticipate what kind of outing we’ll get going forward and he’s set the bar so high. With a few candidates trailing him in Cy Young odds, there may be value elsewhere to consider.

Coming into the 2021 season, Robbie Ray wasn’t even considered the top candidate from his own team for Cy Young odds mainly because of Jays ace Hyun Jin Ryu. The South Korean southpaw was a finalist for the AL Cy Young in 2020 and has been fairly consistent in 2021 with a 9-5 W-L record, 3.44 ERA and 1.18 WHIP and 89 strikeouts. Not exactly Cy Young caliber but respectable.

Well, even if Ryu has been steady, Ray has been a revelation this season after being traded from the Diamondbacks and has easily elevated himself into ace status with Toronto. The ninth-year starter is 9-5 through 20 starts this season with a 3.04 ERA, 1.06 WHIP and an electric 150 strikeouts in 118.1 innings. The strikeout numbers rank third in MLB and he’s easily on pace to smash his full-season record of 235 set in 2019. Another reason why the lefty has been exceeding expectations is his K/BB rate is 5.1, which is another career high for a season.

When you look at his game logs for 2021, it’s a murderer’s row of opponents Ray has had to face. In his five starts in July, he faced the Red Sox twice and the Rays twice, with the Rangers sandwiched in the middle. Those outings have resulted in a 1.99 ERA, 1.15 WHIP and 37 strikeouts, which is elite. Based on projected high-ranked opponents in the AL East and the Blue Jays potentially making a playoff push, it’s not inconceivable for Robbie Ray to make a charge for Cy Young odds and at +2000, it’s worth a shot.

These are the current betting favorites to win the NL Cy Young on BetMGM.

Although he hasn’t pitched since July 7 and his two July starts were way below his standard, New York Mets Jacob deGrom’s body of work in 2021 is already legendary and is deserving of being the favorite for NL Cy Young odds. The Mets workhorse has been a stud through 15 starts with a microscopic 1.08 ERA and 0.543 WHIP. To put those numbers in context, this is after he allowed five earned runs and three homers in 14 innings in July. He had only allowed six ER and four home runs coming into those starts for the entire season. Just insanity.

One of the bigger running jokes about deGrom is that even though he’s been dominant, he rarely gets run support from his teammates and has, on paper, an ugly W-L record. Well, this season he’s actually getting a bit of support this time around and his W-L record is 7-2 in 15 starts while the Mets are 11-4 SU in those games. In 2018 and 2019, he won the Cy Young both times despite a combined 21-17 win-loss record, furthering the notion that W-L record is likely the most overrated stat in baseball.

Unless deGrom’s injury is persistent and he doesn’t return to the mound until mid-August, you can start engraving his name on the trophy now. Even then, the next players on the oddsboard like the Brewers Corbin Burnes (+700) or Kevin Gausman with the Giants (+800) pale in comparison in most pitching metrics like ERA or strikeout rate.

Betting on MLB Cy Young odds can be a fantastic way to get excellent betting value on a pitcher you think will win the position’s top prize. While it’s usually recommended to bet on these markets early to get better value, there’s still opportunity throughout the season for a hurler to make a late push and overtake the betting favorite. Here’s what you need to do to wager on pitchers’ odds to win the Cy Young Award:

When you go to look for American League Cy Young odds on BetMGM, it should look something like this:

The numbers beside each pitcher represent the betting odds for if they were to win the Cy Young Award and are referred to as American odds. When a player has a minus symbol (-) in front of it, that means it’s the amount you’d need to bet in order to win $100 in profit. If a player has a plus symbol (+) in front of it, that means it’s what you’d win if you were to bet $100. The player with the lowest number is considered the betting favorite and in this case, it’s Gerrit Cole of the New York Yankees. I’ll explain below how the potential payouts work:

Let’s say you’ve crunched the numbers, looked at your options and decided Cole is the pitcher you want to bet on. In order to win $100 in profit, you would bet $120 on him at your sportsbook. If he wins, the book would send you back $220 into your betting account — your $120 bet is returned and you’d receive $100 in profit.

On the flip side, let’s say you think Lance Lynn with the Chicago White Sox will win the AL Cy Young Award and you bet $100 on him. If he won, your sportsbook would pay you $375 to your account — your $100 is returned and you’d get $275 in profit for your winning bet.

Try our FTNBets Parlay Calculator to help you determine what potential payouts would be and the amount you need to risk for certain profits.