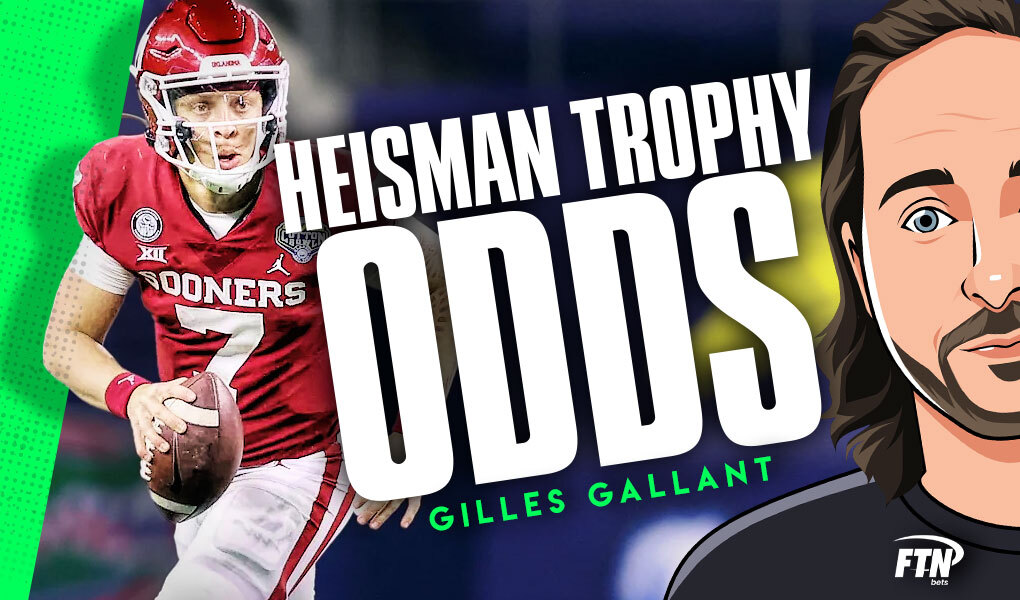 FTN's Gilles Gallant runs through the odds to win the 2021 Heisman Trophy and identifies his best bet.

NCAA college football is almost back, and after an odd 2020-2021 campaign, things are starting to round back into shape for the upcoming season and sportsbooks like BetMGM have an Oklahoma quarterback as the betting favorite in the latest 2021 Heisman Trophy odds.

Second-year QB Spencer Rattler with the Oklahoma Sooners is the +400 favorite for odds to win the Heisman Trophy and be recognized as the best player in NCAA college football. Rattler is looking to follow in the footsteps of former Heisman winners, Baker Mayfield and Kyler Murray, and has similar tools to his predecessors to get the job done.

Following Rattler on the oddsboard is Alabama quarterback Bryce Young, who is taking the reins over from Mac Jones, and expectations will be high for the former No.1 overall recruit to maintain the winning tradition of the Crimson Tide. Alabama was undefeated last season en route to a national championship and WR DeVonta Smith ultimately won the Heisman Trophy over Jones.

With Smith becoming the first receiver to win the Heisman in nearly 20 years, oddsmakers seem to project that quarterbacks will be back in the winning circle for this award in 2021. Nine of the top-10 for 2021 Heisman odds at BetMGM are quarterbacks.

Who will win the Heisman Trophy?

Here are the current betting favorites to win this year’s Heisman Trophy on BetMGM.

Why is Spencer Rattler the 2021 Heisman Odds Favorite?

Oklahoma fell short of the College Football Playoff in 2020 mainly because of early season struggles that saw them lose the first two games of the Big 12 conference schedule against Kansas State and Iowa State. They rebounded for the rest of the campaign by finishing the season 9-2 and winning the Big 12 Championship. Despite it being a disappointment not to make the CFP, Rattler picked up momentum as the season went along and he got more comfortable in Riley’s offense.

Rattler rattled off 3,031 passing yards and 28 touchdowns through the air while also scoring six times rushing the football. His ability to hit the hole while passing for accuracy make him a dangerous dual-threat quarterback to face for defenses and should allow Oklahoma to breeze to another Big12 title.

The Heisman Trophy odds landscape isn’t as competitive this season and last year with the likes of Trevor Lawrence, Justin Fields and Mac Jones out of the spotlight and in the NFL. Rattler has an opportunity to take center stage and run all the way to the Heisman Trophy award ceremony. At +800, it’s the best value you’ll get for him unless he struggles again in conference play.

Long shot Pick for odds to win the Heisman Trophy

With almost the same playing style as Spencer Rattler, dual-threat quarterbacks tend to get the most credit for a team’s overall success, and if the Miami Hurricanes are to return to prominence, it will be because of quarterback D’Eriq King. The fifth-year senior fared OK playing in the ACC last season with 2,686 passing yards, 23 touchdowns and only five interceptions while rushing for four majors on the ground. There’s no denying that when he’s on his game, King can be a force, but can he do it against the higher competition?

When King wasn’t playing against ranked teams, he had 17 passing touchdowns and only two interceptions and the Hurricanes were undefeated. When they faced AP Top-25 teams like Clemson, North Carolina and then Oklahoma State in the bowl game, he looked pedestrian with only five passing touchdowns, three interceptions and 54.5 completion percentage. Oh, and Miami lost all three of those games.

The good news about this bet is you’ll know how smart you were out of the gate when the Hurricanes get set to host the Alabama Crimson Tide as 17.5-point underdogs for the season opener. If King can keep the game close or even potentially win, he’ll launch himself right to the top of odds to win the Heisman Trophy.