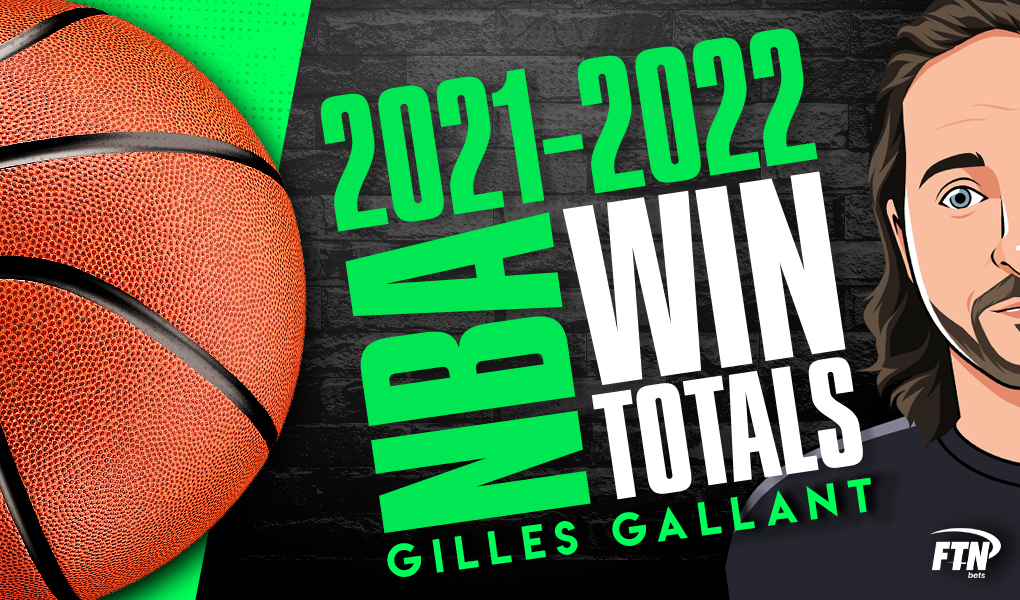 FTN's Gilles Gallant looks at the over/under numbers for the NBA teams' win totals in the 2021-2022 season and picks out his favorite bets.

With the NBA releasing its full 82-game schedule for the upcoming historic 75th season, sportsbooks like DraftKings wasted no time in unveiling the juicy futures market known as NBA win totals for 2021-2022. The team projected with the best record in the league when the season concludes is the Brooklyn Nets, according to oddsmakers.

The sportsbook has the Nets O/U win total set at 56.5 for the upcoming season, which is expected to be a full 82-game slate after the teams only played 70 last year. Brooklyn may have the best trio of superstars on any NBA roster and are also the favorites to win the NBA Championship.

The season kicks off Oct. 19, with defending NBA champion Milwaukee Bucks having a rematch with the Nets to start the campaign. The Bucks have the second-highest projected NBA win total at 54.5 and ousted the Nets in seven games in the second round of the playoffs.

The third team on the NBA win totals list is the Los Angeles Lakers at 52.5 with LeBron James and Anthony Davis being joined by former NBA MVP Russell Westbrook. The Lakers also play on opening day and host the Golden State Warriors (O/U 48.5) for the nightcap.

Let’s take a look at why the Nets are projected to lead the NBA in overall wins and see if there are a couple of teams worth betting now to rise above or fall short of expectations:

Who will have the best record in the NBA?

Why do the Brooklyn Nets have the highest NBA win total?

Having a trio of superstars where Kyrie Irving is your worst All-Star just shows how much ungodly talent the Nets have at the top of their roster. When you have a team led by the best offensive player in the world in Kevin Durant and then the second-best offensive player in James Harden, it almost seems unfair that Irving could be viewed as a throw-in for this trinity of talent. That’s why the Nets have the highest NBA win total entering the 2021-2022 season because no other team (even the Lakers) can match up with them at full strength.

The Nets won 48 of 70 regular season games last year, which is shocking when you consider everything the team went through. Durant missed 35 games due to COVID-19 and a thigh injury. Irving only played 54 games and was AWOL for a period. Harden only played 35 games was playing himself back into shape after his ugly departure from Houston. Now, oddsmakers only want them to win eight more games? This number seems too low if everything is clicking in Brooklyn.

Another factor for why bettors need to seriously consider the O56.5 wins for Brooklyn is this team actually has legit depth now. They signed Patty Mills as another shooter off the bench while drafting promising rookies like Day'Ron Sharpe and Cameron Thomas for rebounding and scoring.

The only way this team doesn’t win 60 games is if both Durant and Harden are lost for much of the season at the same time. That seems highly improbable for a squad that had all those issues last year and still finished second in the NBA in points per game and three-point shooting percentage.

The two teams bettors should be taking a hard look at in NBA win totals odds are the New Orleans Pelicans (O/U 39.5) and the Minnesota Timberwolves (O/U 34.5), two teams that seemingly have struggled playing in the Western Conference. Here’s my take on how to bet these win total markets:

Led by the next wave of impact superstars, the Pelicans have a scoring duo that not many teams can matchup with on a nightly basis in Zion Williamson and Brandon Ingram. Williamson was the only player last season to shoot over 60% from the field while also taking at least 10 shots per game and averaged 27 points per contest. Ingram may have put up similar stats in last year as his All-Star season, but he was battling injuries all season in a convoluted offensive system by Stan Van Gundy.

Where the Pelicans will be improved is down low, as center Jonas Valanciunius will be a huge upgrade over Steven Adams in the paint, and the team also signed point guard Devonte' Graham for more shooting. These two will compliment Zion and Ingram enough to play solid defense but take some open shots when the all-stars get all the defensive attention. New coach Willie Green is highly regarded and should get the best of this squad to finish above .500. If they clean up the defense, I expect the Pellies to win 45-47 games and just miss the playoffs but cash our bet.

I took the U29.5 wins on the Timberwolves last season when they were getting hyped up by adding Anthony Edwards, and there’s no way I was banking on them to win 35 games with this roster.

Did we miss the memo that the Timberwolves are all of a sudden a good team? The defensive deficiencies that plagued the T-Wolves for the last three seasons didn’t just miraculously disappear because Edwards and D'Angelo Russell are now on the roster. Minnesota added no one of interest to improve this squad and are running it back as is. This team won 23 games last year. Now they’re expected to be 12 games better?

Minnesota ranked 29th in points allowed per game last season and 27th the year before. The fact remains that Russell is a defensive liability who will have the ball in his hands in crunch time and Karl-Anthony Towns has yet to prove he can show up in big games.

A lot of the Western Conference teams have improved in the offseason and it’s going to be a dogfight near the end of the season to get those final playoff spots. Fade the T-Wolves till further notice.

How to understand NBA over/under odds

When you go to a sportsbook like DraftKings and see NBA Win Totals odds, it can sometimes be confusing on what the numbers are for each team. FTNBets is here to explain what it means and how to approach the NBA O/U wins markets.

When you check out a sportsbook available in your state, NBA win totals odds for a team should be displayed like this:

The number beside the team name is its projected regular-season win total. In this case, it’s 52.5. If you think the Lakers will win more than 52 of 82 games, you would take the over at -110 odds. These are American odds and because it has a minus sign in front of it (-), that indicates how much you need to bet to win $100 in profit. In this case, you’d need to bet a minimum of $110 to win $100 in profit. Conversely, if you think they’re going to win fewer than 52 games, you’d take the under, also at -110.

To see what you’d get on a winning bet based on the odds and amount wagered, check out the FTNBets Parlay Calculator.