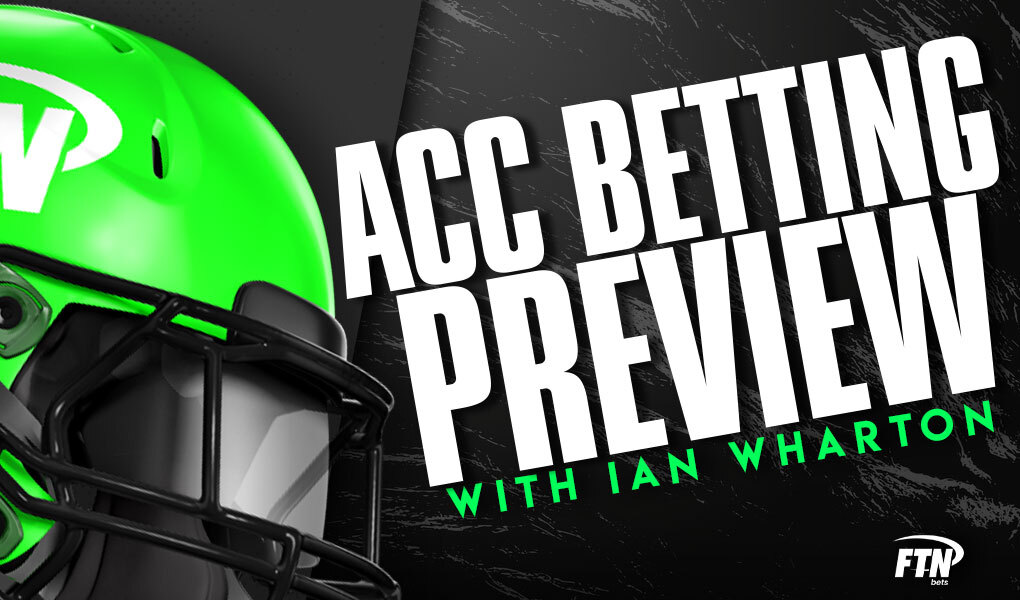 FTN's Ian Wharton runs through his ACC betting preview as we head toward the start of the 2021 college football season.

The ACC has been regarded as one of the most predictable Power 5 conferences in the country since the College Football Playoff began in 2014. The Atlantic Division has been dominated by Clemson, and the Coastal Division has seen a rotation of contenders come and go. The only constant in the conference has been the growth of Clemson as a dynasty and disappointment from other former powerhouses.

2014 was also the last time a major change occurred within the ACC. Maryland departed the conference to play in the Big Ten, with Louisville joining as their replacement. Notre Dame also started their part-time affiliation as they began playing five ACC foes each year.

The Fighting Irish participated full-time with the ACC for a one-year experiment that saw both Clemson and Notre Dame reaching the Playoff. Neither team won its matchup, but the conference as a whole had a successful campaign. Seeing Miami, North Carolina and NC State reach eight wins gave more legitimacy to a conference with a weakened reputation.

2021 brings a new challenge. Notre Dame is back to independent status, and the Tigers are having to revamp their efforts after losing Trevor Lawrence.

We're previewing each conference's best betting picks prior to the season kicking off in less than one month. The ACC has a few potential National Championship contenders, Heisman Trophy candidates, and numerous juicy win totals we'll bet on from DraftKings. The conference is also deep with key players to watch, and we'll make several bold predictions for the ACC.

Here are some of my favorite picks for the ACC conference in the 2021 college football season.

Clemson again dominates the oddsmakers' books, and it's for good reason. The Tigers own the second-best odds at +380 to win the College Football Playoff. Though they return just 69% of their production from 2020 and lost incredible starpower — with Lawrence, Travis Etienne and Derion Kendrick headlining their departures — their recruiting chops are undeniable.

Sophomore quarterback D.J. Uiagalelei will quickly become a star in his own right. He's protected by a quality offensive line and has a group of well-touted young receivers to develop with as the season progresses. However, there are numerous question marks about their actual ability to win, which we'll get into during our ACC predictions.

North Carolina is +4000 to win the title, representing one of the next-best tiers outside of the favorites. The Tar Heels had one of the most explosive offenses in the nation thanks to quarterback Sam Howell, running backs Javonte Williams and Michael Carter and receiver Dyami Brown. All but Howell are now in the NFL.

Almost 80% of their production is back thanks to a majority of their starting defense coming back. They also have a favorable schedule to help land them in the ACC Championship. Head coach Mack Brown could have a tremendous comeback story capped off with a Playoff appearance if his young corps of playmakers are ready to step up.

Miami is the only other ACC Playoff contender with odds under +15000. Sitting at +6000, the Hurricanes are still trying to claim they're “back.” They have a premier opportunity to make statements in 2021 as they play Alabama, a quality Appalachian State team, at North Carolina, and a tough stretch in the fall beginning at the end of October.

There are several Heisman candidates around the ACC. Here are a few of the top ones.

The ACC is loaded with Heisman-caliber quarterbacks. Uiagalelei is my personal pick at +750 to win the award. I was that impressed with the huge-bodied passer in his trial run during Lawrence's injury last year. Clemson has a reasonable schedule to go through, and Uiagalelei has as much physical talent as anyone in the nation.

His biggest issue will be what plagued Clemson candidates in the past; The ACC's reputation and lack of competition made it hard for them to stand out against candidates playing in primetime slots against respected foes. Clemson also tends to play down to their competition far too often during the regular season, making it hard to give them the benefit of the doubt with these awards.

Sam Howell is second at +1400. Howell has his work cut out for him despite being projected as a first-round pick next year. He's a skilled passer in the form of Baker Mayfield but lost critical surrounding pieces. The good news is he doesn't have a premier foe until mid-October when Miami comes to town, so mounting a late-season push is possible.

Miami's D'Eriq King quickly showed he's a must-see playmaker last season. His electricity created 3,200 total yards and 27 touchdowns in 11 games. The Hurricanes have the high-profile matchups that can boost King's already impressive argument for being the best player in the nation.

McKenzie Milton (+6000) has the best comeback story of all time if he can be a productive player for Florida State after his horrific injury back in 2018 with UCF. Milton was a supremely gifted and fun quarterback for the Knights and could have a Lamar Jackson-type impact on a down program needing an injection of momentum upward.

Players to watch in the ACC

The Heisman longshots give us a good snapshot of some of the headlining talent within the ACC. Malik Cunningham of Louisville (+7500), Justyn Ross of Clemson (+8000) and Kenny Pickett of Pittsburgh (+10000) are all stars for their respective programs.

Cunningham is an exciting dual-threat quarterback who has helped keep the program afloat as much as possible since Lamar Jackson's departure. He and cornerback Kel'Trel Clark headline a Cardinals' roster needing to step up after an inconsistent 2020 performance.

NC State's Bam Knight, Georgia Tech's Jahmyr Gibbs, Duke's Mataeo Durant and Wake Forest's Christian Beal Smith are top-tier running backs who could each eclipse 1,000 yards on the season. This is the area of strength for the entire ACC entering the year. Running game fanatics will be pleased with how effective these teams and individuals produce.

The receiving talent isn't far behind the rushers. Ross, who is coming off a nasty neck and spinal injury, was an elite presence prior to his injury. His return to Clemson is a massive storyline entering the year and for the Tigers' title odds.

Behind him is an athletic group of NFL-caliber pass catchers. Boston College threat Zay Flowers may lead the conference in yards and touchdowns if his 2020 and BC spring game is any indication. Jaquarii Roberson of Wake Forest and Mike Harley of Miami are special talents as well.

Roberson averaged over 100 yards per-game in an offense that replaced quarterback Jamie Newman with Sam Hartman. He's a dynamic deep threat at 6-foot-1 and 182 pounds who broke out with 926 yards and eight scores after totaling just 13 catches for 154 yards and one score in his first two years. His breakout has been a huge help for a unit that figured to struggle without Newman and Sage Surratt.

Predictions for the ACC in 2021