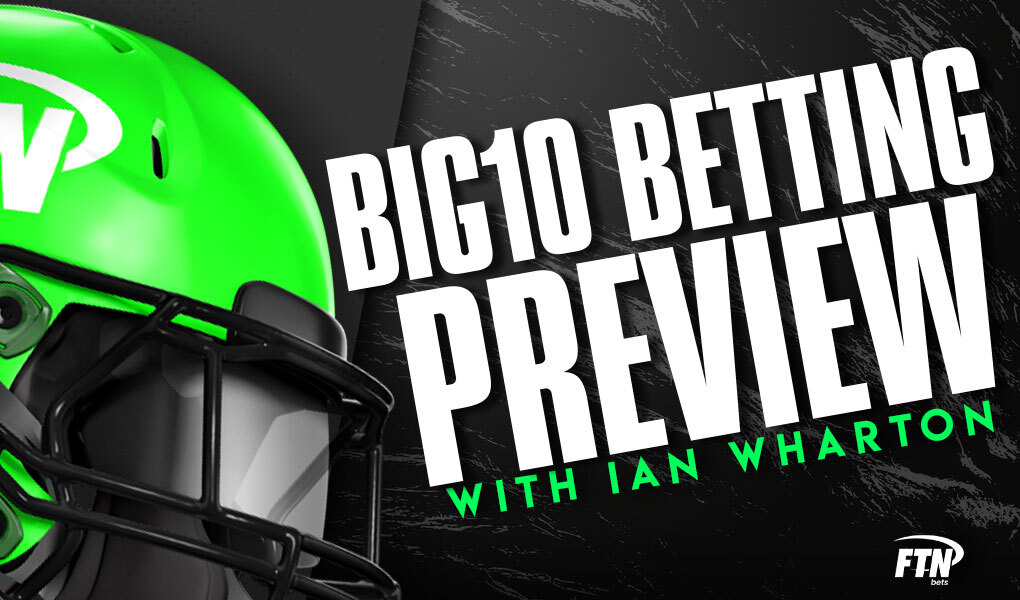 FTN's Ian Wharton runs through his Big Ten betting preview as we head toward the start of the 2021 college football season.

The Big Ten conference has been dominated by one team over the last seven seasons and the gap has widened over the last four years. The Ohio State Buckeyes were thought to be in trouble when Urban Meyer handed the keys to the program to Ryan Day, but instead, Day has turned them into even more of a powerhouse. Everyone else in the Big Ten is trying to catch up to the Buckeyes' lofty recruiting accomplishments and on-field destruction.

There's not been a shortage of solid teams and quality players coming from the Big Ten since the conference split into the East and West divisions in 2014. Wisconsin has played in four of the seven Big Ten Championship games. Northwestern, Penn State, Iowa and even Michigan State have also seen big runs and notable bowl game wins en route to championship game appearances.

Despite criticism, the conference lacks the talent of their southern foes, the Big Ten often represents itself extremely well during bowl season. Though the offenses can be sluggish compared to the spread variants of the Big 12 and even the SEC, the Big Ten has always recruited large athletes who project well to the NFL. The trench play within the conference is almost always dominant throughout the upper-echelon of teams.

The 2021 season will provide a massive opportunity for the conference to take a leap forward. Several coaches are entering critical make-or-break seasons, while others can continue the momentum created in a COVID-shortened 2020 season that proved bizarre.

We're previewing each conference's best betting picks prior to the season kicking off in less than one month. The Big Ten has a few potential National Championship contenders, Heisman Trophy candidates and numerous juicy win totals we'll bet on from DraftKings. The conference is also deep with key players to watch, and we'll make several bold predictions for the Big Ten.

Here are some of my favorite picks for the Big Ten conference in the 2021 college football season.

Ohio State leads the conference by far in the National Championship prop bet race. At +550 (DraftKings) to win, it's clear oddsmakers feel the Buckeyes have as much of an opportunity to take the crown at the end of the year as anyone. They have the third-best odds of any team in the nation.

Historically, teams bringing back more production than others perform better throughout the season. The Buckeyes will try to buck that trend after losing exactly half their production from 2020. They rank 121st in the nation out of 127 teams in returning production.

Such a number is usually crippling, but the Buckeyes' rare recruiting prowess makes them a threat nonetheless. Ryan Day's ability to replace Justin Fields and Trey Sermon with C.J. Stroud and TreVeyon Henderson speak volumes of the respect he's garnered across the nation. And the defense is similarly reloaded with high-caliber 4- and 5-star prospects as well.

Penn State is next up at +5000 (DraftKings) to win the College Football Playoff. This checks out even though the Nittany Lions had a strange 4-5 season in 2020. They lost five straight games and James Franklin looked to be on the outs after a good run but recovered with four consecutive wins.

Finishing anything less than second in the East Division would be a failure for the program. The team is returning 78 percent of their production from last year, and the majority of that talent is on the defensive side of the ball. Star cornerback Joey Porter Jr. and linebacker Brandon Smith headline a unit that has a ton of speed and raw potential.

They must put their talent to use, as they play at Wisconsin to start the year then Auburn in mid-September, Indiana two weeks later and at Ohio State at the end of October. Penn State will have to earn their way just into the Big Ten title game, let alone the playoff race. There's a ton at stake if they can't.

Franklin hired Mike Yurcich to oversee the offense, and he has a ton of pressure to get the most out of senior quarterback Sean Clifford who is a well-built passer with spotty accuracy but enough physical talent to give teams like Ohio State and Michigan trouble. He's aided by highly-touted running back Noah Cain and star receiver Jahan Dotson, so there's plenty of talent around Clifford to produce a consistent unit.

Wisconsin has the same +5000 (DraftKings) line as Penn State but a better pathway to accomplishing the goal. Playing in the West Division is a nice perk as the conference games are much more favorable than Penn State's. They will have already played their three most difficult games by the end of October 2nd's showdown against Michigan.

Experience and upside are both in the Badgers' favor. A whopping 83 percent of their 2020 production is back in the fold, and the star of their offense is healthy. Quarterback Graham Mertz had elite moments in his debut season as a starter but must find consistency for this program to become a major challenger for the division and playoff.

With a roster loaded full of seniors and a potential game-breaking passer, I'm buying Wisconsin as the longshot capable of breaking into the playoff race over Penn State. But the reality is this team's lack of 5-star athleticism will hold them back from winning it all, as they'd potentially face Ohio State twice, Alabama, Clemson, or Georgia en route to the title.

The Heisman Trophy is almost exclusively a quarterback's award with the exception of very few years. The Big Ten has one favorite and several dark horses. As usual for the conference, the discussion starts in Columbus.

Both Ohio State quarterbacks C.J. Stroud and Jack Miller have the highest odds of any Big Ten player. This speaks to their individual talent and the situation each is in. Stroud is tied for fifth with +1400 (DraftKings) and Miller is at +4000 (DraftKings). There's no reason to think Miller will win the job, though, since Stroud has consistently earned snaps over him and is a more dynamic overall threat with his running ability.

Stroud isn't quite on Justin Fields' level as a talent, but he should find early success with so many playmakers around him and Ryan Day's excellent system. Day will craft the offense to his strengths and defenses will be overwhelmed by all of the speed and physicality. It's surprising we're getting such a good return on Stroud and I recommend placing a unit or two on his line.

Michael Penix Jr. and Graham Mertz are next-up at +6000 (DraftKings) for many of the reasons I addressed above. Each has strong skill sets and is in the position to lead an upstart run for their program. Penix is particularly good value because we've seen his team play well on the biggest stage and his moxie is undeniable.

Some of the Big Ten players I wouldn't touch due to a lack of team upside and individual circumstances include Sean Clifford (+7500, DraftKings), Chris Olave and Garrett Wilson (+8000, DraftKings), TreVeyon Henderson, Adrian Martinez, Cade McNamara, and Taulia Tagovailoa (+10,000 each, DraftKings). But the right value if you're looking for extreme longshot is Mohamed Ibrahim.

The incredible Minnesota back might lead the entire country in rushing yards after accumulating 1,076 yards and 15 touchdowns in only seven games last year. There's not another back in the position in the conference in a position to even challenge Ibrahim for First Team All Big-Ten.

Players to Watch the Big Ten

Ohio State is a premier program because of the insane depth across the roster. The receiving corps has first-rounder talents Chris Olave and Garrett Wilson headlining the offense. The Buckeyes' defense is stacked with impact players as well, starting with defensive linemen Haskell Garrett and Zach Harrison. Even freshman Jack Sawyer can make a difference in Year 1.

The Big Ten is deep with potential program-changing talent even outside of Ohio State.

Offensive stars like Purdue's David Bell, Wisconsin's Jake Ferguson and Indiana's Ty Fryfogle should dominate All-Conference standings by the end of the year. Bell in particular should be a first-round draft pick in the 2022 NFL Draft.

The majority of the top-tier talent we haven't already mentioned is on the defensive side of this ball. This will prove somewhat troublesome in intra-conference games because the conference has had issues keeping up in scoring shootouts throughout the past. The recipe for almost every team is to win a defensive struggle.

The defensive back talent is especially impressive as Brandon Joseph of Northwestern headlines the pool. He's a rangy playmaker who was a phenomenal freshman on one of the best defenses in the nation. Penn State's Jaquan Brisker, Ohio State's Sevyn Banks and Josh Proctor, and Indiana's corner combination of Tiawan Mullen and Jaylin Williams are difference-makers.

There's no conference that can stack up in the linebacker depth. Almost every team has a notable second-layer defender worth watching. Rutgers' Olakunie Fatukasi, Indiana's Micah McFadden, Michigan's Josh Ross, Illinois' Jake Hansen, and Wisconsin's Jack Sanborn are productive, quality linebackers who can threaten offenses. Watch for these guys to rack up impressive numbers throughout the year.

Predictions for the Big Ten in 2021