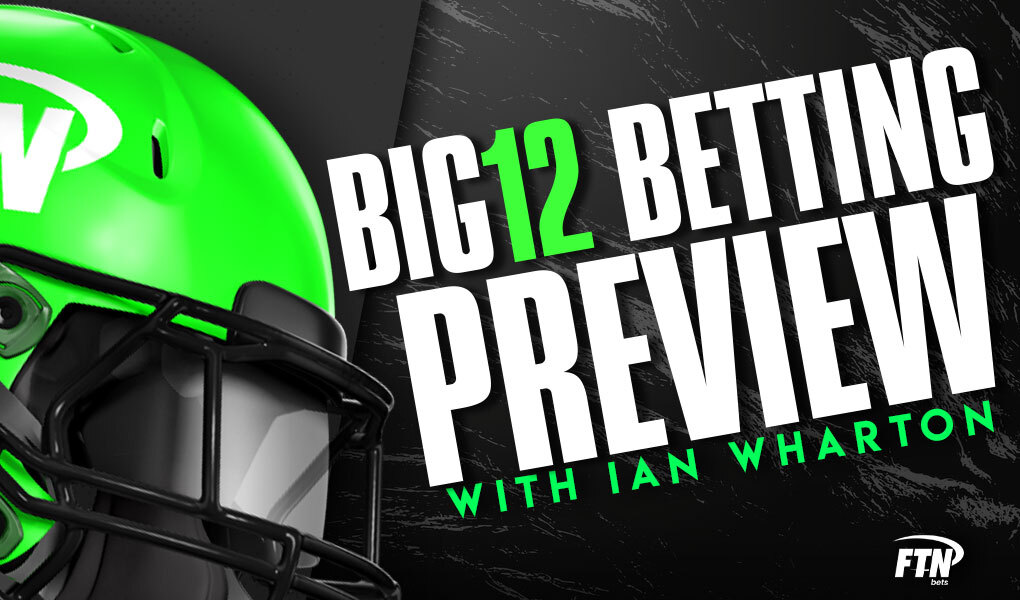 FTN's Ian Wharton runs through his Big 12 betting preview as we head toward the start of the 2021 college football season.

Since 2015, the Big 12 conference has been dominated by the Oklahoma Sooners. Head coach Lincoln Riley inherited a strong program from legend Bob Stoops in 2016 and immediately began producing Heisman Trophy winning passers and a perennial College Football Playoff contender. The rest of the Big 12 has been fighting to earn the No. 2 spot in the Sooners' wake.

The outlook for the conference is about to massively change, though. Oklahoma and former Big 12 stalwart Texas have their eyes on the SEC beginning with the 2025 season. This could cause an incredible change of events throughout the nation.

2021 may be the most competitive we've seen the Big 12 in the last few years. Oklahoma is favored to win its seventh conference championship in a row, but Iowa State is a legitimate contender to knock the Sooners off. Can bounceback seasons from Texas, TCU, Kansas State and Texas Tech be enough to stifle the Sooners' quest?

There's a lot of star power throughout the conference. The Big 12 is known for high-scoring offenses and exciting games that go back-and-forth. If nothing else, this conference is a surefire bet to be entertaining.

We're previewing each conference's best betting picks prior to the season kicking off in less than one-month. The Big 12 has a few potential National Championship contenders, Heisman Trophy candidates, and numerous juicy win totals we'll bet on from DraftKings. The conference is also deep with key players to watch, and we'll make several bold predictions for the Big 12.

Here are some of my favorite picks for the Big 12 conference in the 2021 college football season.

The Big 12 is fortunate enough to have two real contenders to make the College Football Playoff as a high seed in 2021. Oklahoma leads the conference in oddsmakers' eyes with the sixth-highest odds to win the title at +750. Iowa State owns the seventh-best odds at +3500.

The huge gap between the two is due to trust in one program but not the other. The Sooners are returning an overwhelming amount of offensive talent. Plus, Lincoln Riley's 45-8 head coaching record with the Sooners is awfully hard to bet against.

Oklahoma's main selling point will continue to be the offense in 2021. Quarterback Spencer Rattler will almost surely be the No. 1 passer taken in the 2022 NFL Draft thanks to his strong arm, great athleticism and improving feel for the game. And he's surrounded by an elite cast of receiving talent.

Sophomores Marvin Mims and Jadon Haselwood, junior Theo Wease and freshman Mario Williams are as good as any receiving room in the nation outside of Ohio State. The offense should explode even more this season. The young core struggled at the start of 2020 but quickly fell into their expected roles once the unit found some groove. This year, the Sooners don't face a difficult foe until early October.

The defense will again be the question mark for Riley's Sooners. Alex Grinch's unit ranked in the top-29 of scoring and total defense last season, but returned only 75% of their production from a good group. The back seven is young and this has cost the Sooners in crucial moments even as they've stacked Big 12 titles.

Meanwhile, the Iowa State Cyclones are lurking just on the outside looking in. Head coach Matt Campbell has continued to build this program from a mediocre presence to a major player. Expectations have risen after a fantastic 9-3 campaign in 2020.

The tandem of quarterback Brock Purdy and running back Breece Hall is a major reason for the optimism. The program has undergone several identity changes since Purdy took the starting job, and the combination of a top-25 defense and these two stars on offense should be enough for the team to challenge for the Playoff.

Everything checks out analytically for the Cyclones. They have the fourth-most returning production of any team in the nation thanks to a whopping 94% back on offense. They'll also benefit from an easy first half of the schedule before hosting both Oklahoma State and Texas. The key game is in Norman in late November.

The other Big 12 team with significant enough odds worth mentioning is Texas. At +5000, the Longhorns are a shocking inclusion that simply doesn't add up. If Iowa State is the ideal analytical longshot to bet on, the Longhorns are the team you must stay away from.

The Longhorns rank 95th in returning production after losing quarterback Sam Ehlinger to the NFL. Just 46% of their offense is back, and the defense is middle of the pack with 74% back. New head coach Steve Sarkisian is a good schematic presence, but his work is cut out for him.

The running game will dominate the offensive focus thanks to Bijan Robinson's beastly presence. This is out of necessity, though, as Casey Thompson and Hudson Card battle for the starting quarterback job. A run-dominant Texas roster with mediocre defenders isn't winning the conference, let alone the Playoff.

The leading Heisman Trophy contender to start the season is Spencer Rattler at +650. The Sooners' star produced 3,031 passing yards and 28 touchdowns in his first season as a starter in 2020. He started slow, but after being benched midway against Texas, Rattler quickly found his moxie and became a baller.

He's in the ideal situation to put up video game numbers just like Baker Mayfield and Kyler Murray did. But he's in the unenviable spot of being the preseason favorite. It's hard for the favorite to ever match up to the expectations placed upon them if the schedule doesn't have a marquee game almost immediately.

Rattler is a good play, but I don't have faith that Oklahoma will avoid several pitfalls on the season. Unfortunately, losses hurt Heisman contenders even if they perform well. I'm fading Rattler because the Sooners would need to go undefeated for him to become the third Sooner in the last four years to win the award.

Instead, the value is on Brock Purdy (+3500) and Breece Hall (+4000). I'm predicting big things for the Cyclones this year, so it's only natural for one or both of these stars to end up in New York for the Heisman Trophy ceremony. The negative is they could take away from each other.

Last year showed a clear pecking order between the two, though, and it's Hall who is more valuable to the team. Purdy was good but more of a game manager than his 2019 season when he emphatically claimed stake to the job. He regressed almost an entire yard per attempt down to a pedestrian 7.5 in 2020 as he lost some of the aggressiveness this offense thrived on.

Hall isn't at risk for a continued slide. The 6-foot-1, 215-pound runner looks like a future first-round talent with his explosive running style. He racked up 1,572 yards and 21 scores in his sophomore season in 2020. Bigger things are coming.

Three seniors are starting along the offensive line and the other two include a talented redshirt junior and redshirt sophomore. This offense is going to thrive, and Hall is the catalyst for them to ascend into the Playoff conversation.

Casey Thompson is shockingly at +4000 despite throwing 29 passes in two years. The only way I'd take Thompson is if he were at double that return. We don't know if he'll win the job yet or have any indication Texas can win 10 games. I don't foresee any situation Thompson wins the Heisman without a stunning run from the program. The same can be said for Hudson Card at +6000.

Oklahoma State junior Spencer Sanders is next up at +6000. Sanders is an interesting player at this number, because it's presuming a massive jump in performance after two identical seasons in Stillwater. Like the Texas quarterbacks, I simply don't see the numbers matching his peers in order to steal the award. Plus, an 8- or 9-win Cowboys team isn't getting the national attention needed for Sanders to steal the award from more premier talents.

Neither Marcus Major of Oklahoma (+7500) nor Tyler Shough of Texas Tech (+7500) are smart plays either. Major won't have a large enough role within Oklahoma's offense to be a contender. Shough is a good talent, but Texas Tech might win five games in 2021. There's not a great longshot for the conference.

Players to watch in the Big 12

We mentioned several of Oklahoma's and Iowa State's offensive playmakers already, but the rest of the conference boasts similar talent that can quickly become household names. We have to add Oklahoma rusher Kennedy Brooks and Iowa State tight end Charlie Kolar to the list of stars from those rosters before moving elsewhere.

Texas rusher Bijan Robinson is the next big star at the position after flashing why he was the No. 1 back in the 2020 class. His power and overall brutality is impressive. Steve Sarkisian will immediately utilize him in a similar way as to how Alabama unleashed their freaky runners in his time there.

The best overall collegiate rusher besides Breece Hall in the conference might be Kansas State's Deuce Vaughn. Vaughn's miniscule frame was quickly forgotten as he dashed through and around defenses to the tune of 1,076 yards and nine scores from scrimmage. He carried the Wildcats despite being a true freshman.

West Virginia's roster is problematic for many reasons, but the running game is legitimately good. Leddie Brown broke out after two quiet seasons as he produced 1,212 yards and 11 scores in 10 games. He has to prove he can have big games against teams other than the lowly Kansas Jayhawks and TCU Horned Frogs, but he has NFL talent as a multi-faceted threat. Defensive tackle Dante Stills joins Brown as a potential all-conference star.

Iowa State linebacker Mike Rose and edge-rusher Will McDonald are one of the best one-two punches in the Big 12. Each produces at an extraordinarily high level and are among the three-best defenders in the conference. This unit will be defined by their greatness.

Oklahoma pass-rusher Nik Bonitto is the best defender in the conference and headlines some quality back-seven talent. He totaled nine sacks in 2020 and proved explosive for a 6-3, 238-pounder who can play in coverage too. The rest of the Sooners' unit will be depending on him.

The race for secondary players who earn an All-Big 12 nod will be tough. Texas cornerback D'Shawn Jamison and Baylor cornerback Raleigh Texada are the most naturally gifted playmakers at the position. They'll be challenged by the TCU tandem of Noah Daniels and Tre'Vius Hodges-Tomlinson.