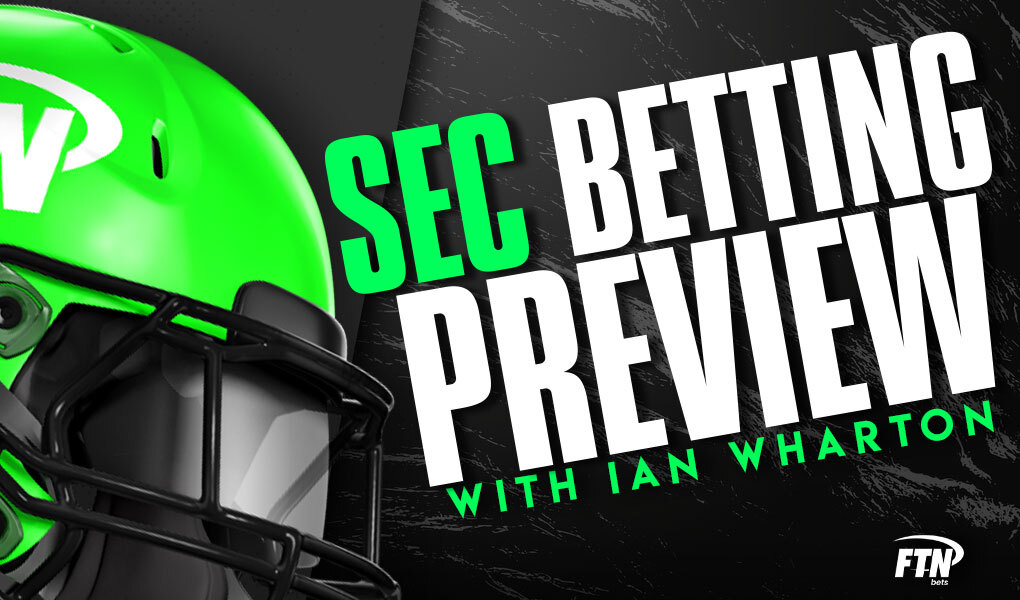 FTN's Ian Wharton runs through his SEC betting preview as we head toward the start of the 2021 college football season.

The SEC continued its dominance of the College Football Playoff era last season as the Alabama Crimson Tide ripped off one of the most impressive runs we've ever seen. This came right after the LSU Tigers put together their own amazing undefeated season and national title in 2020. In 2021, it's Alabama and Georgia atop the preseason rankings.

We know the conference too well to think the only influential teams are the Crimson Tide and Bulldogs. Florida, Texas A&M, and LSU are all top-25 teams entering the season, and Ole Miss is lurking with a dangerously talented offense. Auburn tops the next tier of challengers who can knock off any contender, and Missouri, Kentucky, Arkansas, Tennessee and Mississippi State are trying their best to take a leap.

Without question, the SEC is the most difficult conference to project because of the depth of talent across the league. But that doesn't mean there's not great value plays for us to bet on.

We're previewing each conference's best betting picks prior to the season kicking off in less than one-month. The SEC has one potential National Championship contender, Heisman Trophy candidates, and numerous juicy win totals we'll bet on from DraftKings. The conference is also deep with key players to watch, and we'll make several bold predictions for the SEC.

Here are some of my favorite picks for the SEC in the 2021 college football season.

Many of these teams are easy to call out as pretenders, but no one can say that any of the top four has no chance entering the year. Alabama continues to reload each year and seems to outdo themselves even after first-round picks flee to the NFL at an unprecedented rate. Nick Saban is working with one of the least experienced rosters in the nation, ranking 110th of 127 teams in terms of returning production, but he's proven repeatedly that's not an issue.

Few programs have earned such trust. Ohio State and Clemson are the only other teams capable of reloading instead of ever rebuilding. Each has become a staple of the College Football Playoff each year. But that doesn't mean Alabama is a shoo-in considering where the rest of the league is at.

The Georgia Bulldogs are another young team after losing a whopping 61% of their defensive production from 2020. Their best pass-rusher and both starting cornerbacks from last season are all in the NFL now, creating concern as to who will be filling in such large roles. Their pathway to a Playoff appearance may not even require an undefeated season, but a two-loss season could be good enough if the losses are considered "good" by voters.

An early season showdown with Clemson will go a long way for Georgia's playoff hopes and their Heisman Trophy contenders. Failing to win doesn't rule them out since it's a quality loss but their margin for error later in the year dwindles significantly.

Texas A&M, LSU, and Florida are each looking to breakthrough to the next level of the conference. The Aggies are returning just 60% of production and the Gators are at 55%. Both have significant work cut out for their coaching staff due to their offensive turnover.

There's a strong set of playmakers to help their efforts, at least. Texas A&M boasts arguably the strongest running back room in the country thanks to the combination of Isaiah Spiller, Devon Achane and Ainias Smith. Can the quarterback room produce a passer good enough to get past their toughest matchups in their first year as a starter?

Florida is handing their reins to quarterback Emory Jones. A slew of playmakers departed the offense to the NFL, and the onus is on head coach Dan Mullen to quickly replace their talented losses. The defense is in better shape, but they have a tall task as well without a primary pass-rusher in line to put up a monstrous year.

LSU has the advantage of experience compared to their second-tier SEC peers. With just under 80% of their production back, 2021 is about sharpening their play after a difficult rebuilding year. Who steps up at quarterback is their biggest issue, and that's not a looming concern any team wants to have.

The best play is Alabama because of the predictability of their performance. Georgia has been a strong competitor and is rightfully in the favorites mix. But the best value is Texas A&M; they have a proven coach, a great set of playmakers ready to step up, and a quality defense already in place.

Just like in the National Championship race, the SEC has a ton of options for Heisman Trophy candidates. The conference has two favorites and two key second-tier contenders amongst the many options. No Heisman winner will come from a mediocre SEC team based on history so we're able to eliminate numerous players who would be mentioned in other conferences.

The favorites are Alabama quarterback Bryce Young and Georgia quarterback J.T. Daniels. Young is entering his first year as a starter after losing the job in 2020 to Mac Jones. A highly rated dual threat with a cannon for an arm and great scrambling ability, Young is the most dynamic rushing threat the program has had since Jalen Hurts. Even better, Young has potential to be a more efficient passer early on in his career.

His surrounding cast of playmakers makes his job relatively easy compared to his peers. However, he'll be working with new offensive coordinator Bill O'Brien after Steve Sarkisian promoted to Texas. I think this is a notable downgrade that will hurt Young, and it's why I'm not taking him at this solid line.

Daniels is another SEC quarterback I'm fading. Although Daniels has an NFL arm and accuracy, he has to lead receivers better and anticipate throwing windows. His best hope is another year off a knee injury will lead to improvements around the margins. Offensive coordinator Todd Monken will be a great influence on him, but I'm concerned about his surrounding cast without George Pickens.

The storyline with Daniels begins with Clemson. If he's outshined by D.J. Uiagalelei on the big stage, he'll have no shot of winning the Heisman. I've seen nothing to this point to believe Daniels is better than the budding star for the Tigers.

The value plays in the SEC are more interesting because of the room for upward mobility. Ole Miss' offense will devastate their foes because of Lane Kiffin's scheme, some great receivers, and especially Matt Corral. Corral is an exciting passer with plus downfield throwing ability. He creates highlight plays with ease, and the Rebels' defense will require him to stack stats weekly.

Corral's pathway to the Heisman means avoiding the bunch of interceptions that came against Arkansas and LSU (11 of his 14 total). He must also put in good performances on the grand stage at Alabama, at Auburn, and at home against LSU and Texas A&M.

Florida's Emory Jones is a bit of an overvalued dark horse based on his body of work, but Dan Mullen has earned some of our trust. He's produced quality quarterbacks over the course of his career. Jones is a power thrower who must refine his touch and quickly acclimate to complex defenses for Florida to reach their potential and enter the Heisman race.

Jones is a better bet than the unlikely Auburn duo of Tank Bigsby and Bo Nix based on their roster construction and individual talent ceilings. It's rare to see running backs win the award, and Nix is a poor passer. Jones has the better pathway to winning even if he has his own developmental arc to fulfill.

Players to watch the SEC

The conference is always loaded with a bevy of playmakers and trench players alike. The quarterback play will ultimately determine how far several teams go, but that doesn't mean the names we'll rank highly are any less worthy of watching. Each of these stars has a fantastic future ahead of them, including what's going to happen in 2021.

The running back talent is fantastic as usual. On top of the Texas A&M trio and Auburn's Tank Bigsby, South Carolina's Kevin Harris and Ole Miss' Jerrion Ealy are men capable of wrecking defenders and creating excellent highlight reels. Alabama's Brian Robinson Jr. is also in a great position to take the team's primary back role.

Alabama receiver John Metchie headlines the position, but also look for Arkansas receiver Treylon Burks to devastate defenses even in a tough situation. Burks is a great vertical threat and can be an All-SEC producer. Georgia transfer receiver Arik Gilbert is also an ascending talent with rare movement ability for someone 6'5" and 248 pounds. And there's no question Texas A&M tight end Jalen Wydermyer is the premier talent at the position in the country with his strong hands and crisp route-running.

There's an insane amount of secondary talent in the conference as well. Derek Stingley Jr. is the best in the country, and teammate Eli Ricks is right behind him. Florida cornerback Kaiir Elam is the next Gators prodigy from their pipeline with his sticky man coverage ability. Of course, Alabama duo Josh Jobe and Malachi Moore will compete to rise within the conference's ranks as well now that Patrick Surtain is in the NFL.

DeMarvin Leal headlines the front seven talent. He's a great pass-rusher capable of hitting double-digit sacks with his skill set. Only Will Anderson of Alabama and Tajan Jeffcoat of Missouri have the same type of proven useful athleticism entering 2021. SEC-hopefuls Florida, Georgia, and LSU must find their version of this elite defensive presence.

The linebacker position is looking good as well. LSU's Mike Jones Jr, Alabama's Christian Harris, Arkansas' Grant Morgan, and Auburn's Zakoby McClain are early favorites for the big accolades. The range this group can cover projects well into the spread-era of the conference. The trench play will be intense with these downhill bullies.

Predictions for the SEC in 2021