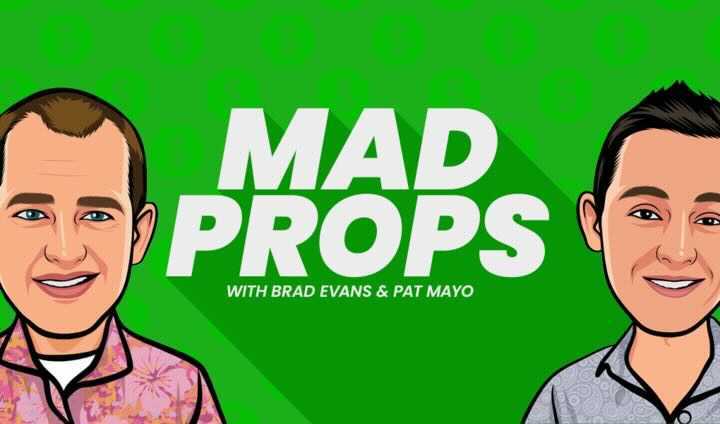 FTN's Brad Evans and Pat Mayo get together to discuss some of their favorite player props of NFL's Week 17.

Each week our -EV bettors do their damnedest to drain bank accounts with their NFL player prop picks. Fade or follow? That, as always, is entirely up to you. Speaking as transparency advocates, we’ll track our coolers’ progress, good or horribly bad, all season long. Below is a six-pack of picks to whet your Week 17 whistle. All lines are pulled from DraftKings Sportsbook. Use the FTN Bets Prop Shop tool for all the best lines:

Brad Evans — OVER. Hurts continues to inflict pain on opposing defenses within Doug Pederson’s revamped RPO-styled system. His duality is vintage Cam Newton-esque, a QB who drags tacklers in the open field and bursts up sidelines when presented an opportunity. Due to Washington’s aggressive nature — it ranks No. 9 in pressure percentage — sprint-happy passers have logged numerous chunk gains against them. Russell Wilson, Daniel Jones, Kyler Murray and Lamar Jackson each reached 50 ground yards when exchanging pleasantries with the Fighting Footballs earlier this year. Hurts, who has topped 60 yards in three straight, bolts his way to 65-plus.

Pat Mayo — OVER. Dallas experienced success against Hurts after the first few drives a week ago when they decided to make him a pocket passer. While Washington has much, much better front seven, their pressure rate is going to force Hurts off his spot almost immediately. Pressure running QBs, and watch them pile up the rushing yards.

Brad Evans — OVER. Davis Bakhtiari’s injury, a massive blow to Green Bay’s front, could alter Tonyan’s role, but the proposed threshold is low enough for the tight end to exceed it. The Bears are overly forgiving to TEs. This season, the Monsters of the Midway have yielded the fifth-most yards to the position giving up 55.7 per game. Tonyan, who ranks No. 3 at his position in yards per target (10.0), likely only needs three receptions to surpass 35 yards. Recall in Week 7, he tallied five catches for 67 yards and a score against the archrival.

Pat Mayo — UNDER. This is more of a pass, since it’s about the proper number, but even in games when Tonyan gets a larger portion of the target share in GB’s offense, the aDOT is so low it takes him a while to actually get there. And now, with Davis Bakhtiari finished for the year, you may see Tonyan asked to block slightly more than usual, thus decreasing his opportunity.

Brad Evans — OVER. Gallup is a shot of Montezuma sans a water chaser, a receiver who ceaselessly burns. Well … that is, in recent games. Snapping out of a multi-week funk, he’s suddenly become a favorite weapon of Andy Dalton. He’s scored four TDs since Week 13 and eclipsed the proposed total in two of his past four contests. His speed and ball adjustment skills should trigger nightmares for Giants DBs. His projected assignment, Isaac Yiadom, has surrendered a 128.7 passer rating and 1.20 yards per snap. Gallup, who booked four catches for 73 yards in the first matchup Week 5, repeats the feat the second time around.

Pat Mayo — UNDER. Gallup’s been running hot, but this all depends on how the Dallas WRs line up on the field. CeeDee Lamb and Amari Cooper tend to move around between the outside and slot, while Gallup is almost always positioned outside the hashes. Since that’s the case, it makes him a likely shadow candidate from James Bradberry. It’s not that you can’t beat Bradberry, it’s that completions come much easiest against every other member of the Giants secondary.

Brad Evans — OVER. Sportsbooks continue to misprice Taylor lines. He’s officially Indy’s Clydesdale, gripping the pigskin for 18 rush attempts in consecutive games. The picture of efficiency on those opportunities, he’s forced a missed tackle an absurd 27.5% of the time since Week 11. Jacksonville, clearly daydreaming about shotgunning beers on golf course tee boxes, is a highly exploitable opponent. This season, the cuddly Jags have allowed 4.53 yards per carry and 110.1 rush yards per game to RBs. Needing 84 yards to reach 1,000, he cruises to 90-plus yards for the fourth time in his last six games.

Pat Mayo — OVER. I’ve fallen for the workhorse Taylor in an incredible spot as double-digit favorites against an awful run defense trap a few times this year. But it couldn’t go wrong again, could it? I’ll bet no. If Taylor picks up 15 carries, he slaughters this number. Even with the Indianapolis OL injuries.

Brad Evans — OVER. Torching defenses as though they were crème brûlée, Cooks has tickled the tastebuds with a multitude of scintillating performances. He’s hauled in at least 80 yards in four of his last seven games. In a matchup with a mammoth 56 total, he should once again command at least 7-9 targets. Currently No. 16 in completed air yards, the wideout should tack on several digits to the total. His projected adversary, Malcolm Butler, has conceded 1.34 yards per snap to his assignments. Cooks registered nine catches for 68 yards when he first clashed with Butler in Week 6. In the season finale, he’ll go the extra yard(s).

Pat Mayo — OVER. Deshaun Watson can take the lead in NFL passing yards with beaucoup against the Titans, so expect plenty of bombs aways. It’s not like the Texans have anything else to play for. I project Watson for over 40 passing attempts in this game, and with Cooks able to get close to a 30% share of those targets, 69.5 yards is a strong OVER.

Juggernaut J.K. is finally receiving the attention he rightfully deserves. A bloodhound with a nose for the goal line, he’s scored in five straight games, amassing a behemoth 30.6% red-zone carry percentage since Week 12. Outclassing a Cincinnati defense that’s allowed 5.09 yards per carry, 115.3 rush yards per game and nine rushing TDs to RBs this season, the rookie should again slam his way for six. His end-game line will look very different from the 7-25-0 notched in the first matchup back in Week 5. — Brad Evans

Pat Mayo is an award-winning video host and producer of long and short-form content, and the host of The Pat Mayo Experience daily talk show. (Subscribe for video or audio). Mayo (@ThePME) won the 2020 Fantasy Sports Writing Association DFS Writer of the Year and Golf Writer of the Year awards, along with the Fantasy Sports Trade Association Best Sports Betting Analyst award, and was a finalist for four FSWA Awards in 2020 (Best Podcast, Best Video, Daily Fantasy Writer of the Year, Golf Writer of the Year). His 21 FSWA nominations lead all writers this decade and are third-most all-time. Mayo has been recognized across multiple sports (Football, Baseball & Golf), mediums (Video, Writing & Podcasting), genre (Humor), and game formats (Betting, Daily Fantasy, and Season Long).