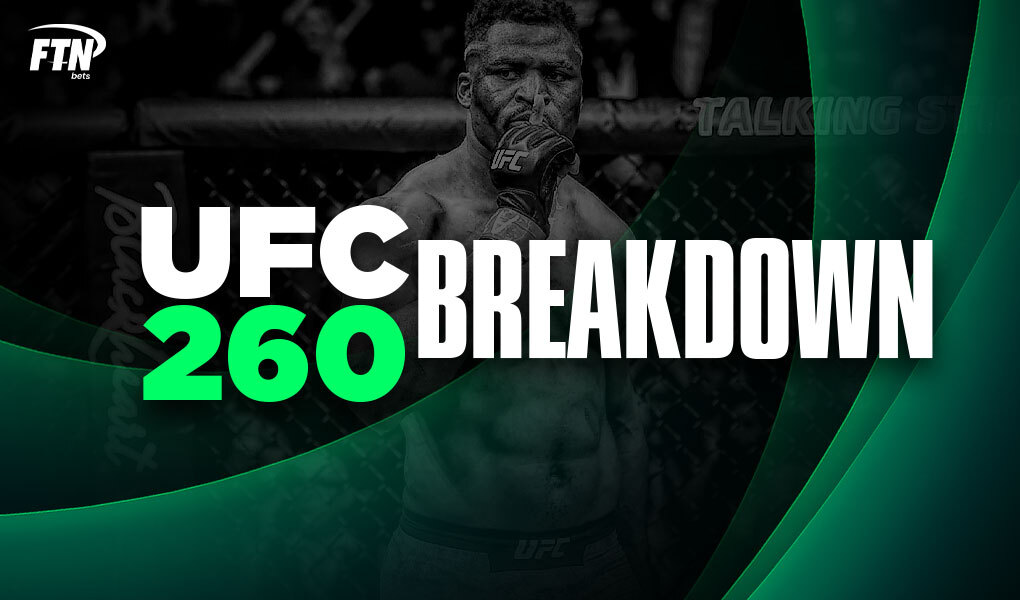 Zayd Hussein takes a look at UFC 260, the odds, picks, and more.

UFC 260 is set to take place this Saturday night with one of the most anticipated rematches in recent memory. Stipe Miocic has been ruler of the heavyweight division for quite some time, the winner of this bout will go on to fight Jon Jones in the biggest fight in UFC heavyweight history.

Since the first bout back in 2018 with the exception of the Derrick Lewis worst fight ever, Francis Ngannou put together four straight finishes over the likes of Curtis Blaydes, Cain Velasquez, Junior Dos Santos, and Jairzinho Rozenstruik. This is all while Stipe Miocic has fought Daniel Cormier three straight times,

In this bout, I think we will see a calmer, more precise Ngannou. If you look back at the first bout you will see a younger Ngannou swinging wild without picking or setting up any of his shots. Ngannou is more composed but still just as dangerous. I feel in order for Miocic to successfully defend the title he will need to fight a perfect fight. Using his wrestling mixed with speed will be the key for his success, but all of this isn’t as sharp as it’s once been for him.

Miocic is now 38 years old and has lost lots of his speed and power he had against Ngannou in the first fight. I think this new version of Ngannou gets the fight done via KO on the feet. Look for him to not rush a single thing in this fight, he will try to let the knockout come to him and I believe all it will take is one shot, when that one shot lands it will be lights out for Stipe Miocic.

The difference in this rematch will be the improvements Ngannou made on the feet mixed with more experience in the cage. This isn’t a young fresh fighter like the first time around. The oddsmakers opened this fight at Ngannou -175, now it's hovering around -120. I think they got it right at the open. I would consider Ngannou a -175 to -200 favorite and taking him at the current price of -130 on DraftKings Sportsbook is a great bet.

Tyron Woodley is taking on Vicente Luque in the co-main event, looking to snap out of a three-fight losing streak. Woodley hasn't won a single round in his last three fights, losing to Colby Covington, Gilbert Burns and Kamaru Usman.

Many are doubting Woodley coming into this fight and rightfully so, as the guy has been dominated for 15 straight rounds. That said, I feel this is a matchup that fits well with his skill set. All three of Woodley’s losses have come at the top of the division to absolute killers. In this bout he isnt going to face the threat of a takedown or going to the ground at all like he did against his last three opponents, Woodley will be able to stand and bang without caution.

People forget that Woodley has wins over the likes of Stephen Thompson who just recently defeated Luque, and other notable wins over the likes of Darren Till and Robbie Lawler. If there's any fight that’s considered a “must win” for a fighter I think it's Tyron Woodley in this bout. I like Woodley at the current price of +205 at DraftKings Sportsbook. I think he can outstrike Luque and get this done by decision.

Be sure to also check out our best prop bets for UFC 260 and sign up for our MMA Package!