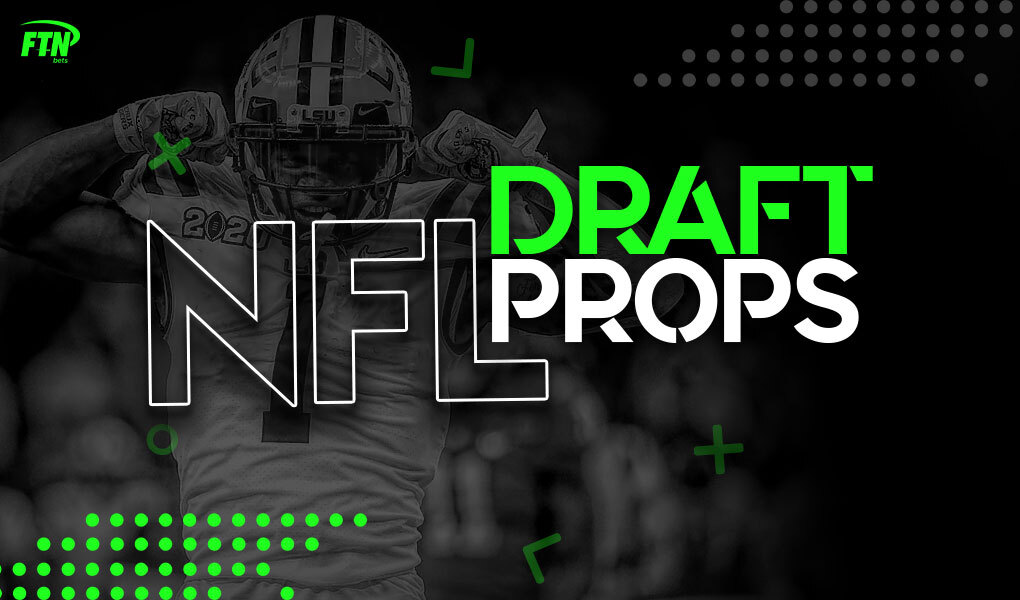 The NFL draft is a yearly spectacle to behold. It can elicit hope, excitement or dismay for any NFL fanbase. These three days stand as both the culmination and precipice of hard work for 257 collegiate athletes. Rumors of each player's landing spot or draft slot begin circling early. With each headline, their betting or prop odds can shift.

Head to our Prop Shop Tool and search any player by name to find their latest betting odds across numerous legal sportsbooks. Let's discuss early NFL Draft props and odds for each player for the 2021 NFL Draft.

All odds listed below are courtesy of DraftKings Sportsbook.

Lawrence (-5000) is the obvious pick, and the odds reflect it. As crazy as it sounds for the Jaguars to bypass Lawrence in this spot, it’s not like we haven’t seen NFL teams surprise us year after year with trades or changes of heart.

Wilson (+600) has been rumored inside the top three picks and the buzz is growing. A team moving up to snag him might seem outlandish, but we’ve seen teams do crazier things before (cough cough *Bears*).

Fields (+1600) has both the arm talent, mobility and high profile college pedigree to unseat Trevor Lawrence.

The Alabama pocket passer is the ultimate longshot bet here. Jones (+15000) has received some buzz climbing inside the top 8-10 selections.

The hulking tackle from Oregon is the odds favorite (-715) for good reason. Sewell’s combination of agile feet and strong hands has the ability to be special.

Slater’s odds (+300) are mouth watering as some analysts in the draft community have him rated higher than Sewell. Seeing him hopping the heavily favored Sewell is not as outlandish as it sounds.

Vera-Tucker (+8000) is the underrated betting home run swing here. In another unprecedented offseason of scouting with COVID-19 alterations, a team looking for a safe ground rule double type prospect with a high and safe floor could surprise and grab him early.

Chase (-150) will likely hear his name spoken inside the top 10 picks in the NFL Draft.

If there is a player who could jump Chase in the pecking order, it could be Alabama’s Heisman trophy hero DeVonta Smith (+125).

NFL teams still covet the one thing that you can’t teach, and that’s otherworldly speed. Waddle (+700) has the Alabama pedigree and the jets to zoom past the competition.

Shooters gotta shoot, and Bateman (+2000) is a great longshot to take. Bateman’s overall game and 18.8 breakout age (95th percentile) give him the outside shot to be a late mega riser.

Etienne (-200) is the favorite here. His home run ability and passing game prowess make this a possibility.

Harris’ odds (+125) should be closer to Etienne’s. Harris has the skill set and workhorse history to find himself as the first selected from his positional group. Harris is my favorite bet here.

Don’t let the rumors fool you: Javonte Williams (+700) has a three-down, bell cow ability at the next level. Williams’ pass protection and bruising running style could leave a team smitten with him.

If there’s a player who could push Javonte Williams out of the way, it could be his former North Carolina backfield mate. Carter (+3300) displayed a well rounded list of attributes in college. A smaller frame didn’t deter the Chiefs’ from selecting Clyde Edwards-Helaire as the first overall running back last year, so don’t count out Carter here.

Did you expect someone outside of Lawrence (-2000) as the favorite here?

The Wilson (+800) hype train has left the station. Don’t be shocked if a team climbs aboard and rides it to the top spot.

If not Wilson, Fields could be the upset selection here. The quarterback position is the lean here regardless of what name you pick. A quarterback has been the first overall pick in five of the last six NFL Drafts.

Let’s have some fun here and travel back in time. If a team believes Sewell (+3300) is a generational talent at the tackle position, we could see a team revisit the 2013 NFL Draft. That year, Eric Fisher was the top overall selection and tackles were three of the first four picks in the first round.

In the last seven years the only time teams have not selected a quarterback No. 1, they have gone for the top defensive player on the board. Parsons (+25000) is arguably that with his ability not only in pass coverage, but his skills to help out in the pass rush department as well.

The Jacksonville Jaguars will be selecting first in the 2021 NFL Draft.

The NFL Draft will begin Thursday, April 29, in Cleveland, OH, and end Saturday, May 1.

The NFL Draft is a total of 257 selections made in 7 rounds.