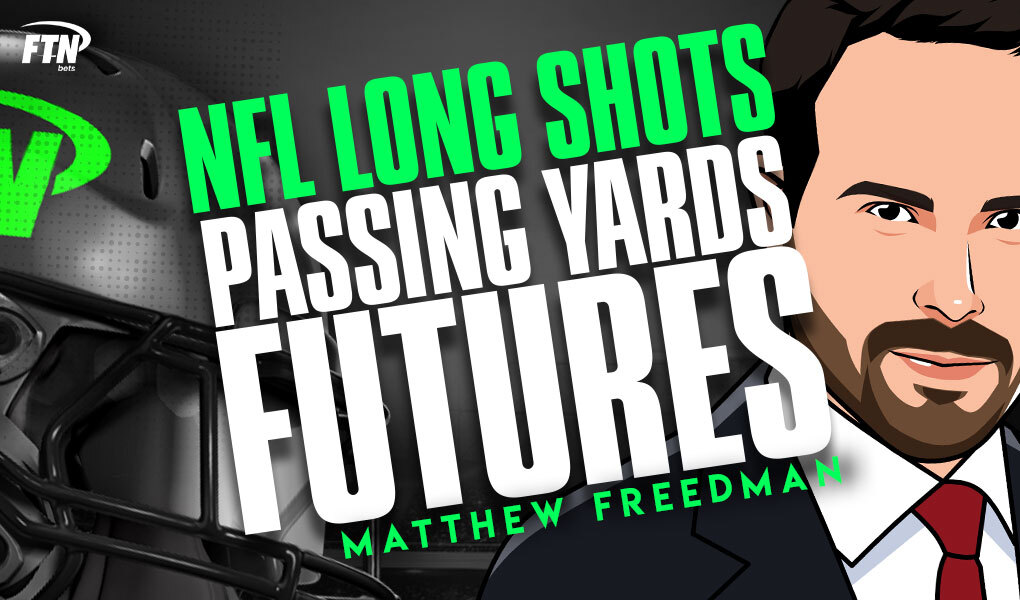 FTN's Matthew Freedman picks out some of his favorite bets for league leader in passing yards in the NFL in 2021.

In 1984, Dan Marino became the first NFL quarterback in a single season to pass for 5,000 yards — a threshold no other passer managed to cross until Drew Brees in 2008.

Since then, the 5,000-yard barrier has been broken 10 times by seven different quarterbacks: Brees four times, and Peyton Manning, Tom Brady, Ben Roethlisberger, Jameis Winston, Patrick Mahomes and Matthew Stafford, once each.

Clearly, 5,000 yards isn’t what it used to be — and now that the regular season is 17 games, we should expect to see that mark hit with some frequency.

If you check out our 2021 FTN player projections, you’ll see that we have Mahomes projected for a league-high 5,103 yards passing. In fact, almost everyone I know who creates sharp season-long projections has Mahomes slated to lead the NFL with over 5,000 yards.

The odds are that the 2021 passing champion will have well over 5,000 yards, and he might even approach Peyton Manning’s NFL record of 5,477.

But I’m not willing to bet Mahomes will be that guy. He should be the frontrunner — and yet there’s no value in betting on him: Everyone is projecting him to lead the league in passing, so the sportsbooks have given him rather short odds.

At the most generous odds of +450, Mahomes has an 18.2% implied probability to lead the league in passing (per our new Betting Odds Calculator), and that feels much too high given the quarterback talent in the NFL and the randomness of the sport in general.

Plus, it’s not fun to bet on Mahomes in this spot because his odds are “only” +450. For a bet of this nature, the payoff doesn’t seem sufficient.

I tend to view season-long player futures more as entertainment and less as investments, so when I bet in this market I tend to gravitate toward players who have longer odds (+1000 or higher).

With that in mind, here are six quarterbacks I like to lead the league in passing given their long-shot odds.

Tom Brady played last year with a torn MCL in a new offense with new receivers — and he still passed for 4,633 yards.

In his second year with the Buccaneers, Brady could absolutely go off, just as Peyton Manning did in his record-setting, second-season-in-Denver 2013 campaign.

Brady has perhaps the best and deepest wide receiver unit in the league with Mike Evans, Chris Godwin, Antonio Brown, Scott Miller, Tyler Johnson and Jaelon Darden. He has three pass-catching tight ends in Rob Gronkowski, Cameron Brate, and O.J. Howard. And now he also has a strong receiving back in Giovani Bernard.

On top of that, the Bucs have a top-three offensive line (per FTN football guru Brett Whitefield).

Last year, Brady led all starting quarterbacks with his 8.96-yard average depth of target (per our Advanced Passing Stats Tool).

If the Bucs pass a little more than expected, if Brady stays aggressive with his downfield throwing, and if he builds on the connections he established last year with his receivers, he could rather easily pass for 5,000 yards.

One of Nelson Sousa’s bold calls for 2021 is that Brady will be the No. 1 fantasy quarterback — and if that happens then Brady will likely have an outstanding season as a passer … because his lack of rushing upside is legendary.

For more of Nelson’s insights, subscribe to his FTN high-stakes fantasy package, which comes with coaching sessions and his rankings.

Matthew Stafford is a certified gunslinger, and this year — his first with the Rams — he probably is in the best overall situation of his career. He has a well-rounded wide receiver unit with Robert Woods, Cooper Kupp and DeSean Jackson. He has two potential-laden tight ends in Tyler Higbee and Jacob Harris. He has an innovative playcalling head coach in Sean McVay.

And without No. 1 running back Cam Akers (Achilles), the Rams might heavily lean on the passing game.

Eliot Crist is betting the over on Stafford’s passing prop of 4,350.5 yards, and I lean that way as well. Stafford has already surpassed the 5,000-yard mark once in his career, and in his new environment it’s not hard to imagine him doing it again.

Last year, Herbert had maybe the greatest passing season of all time for a rookie quarterback — in an offense overseen by milquetoast head coach Anthony Lynn … while not starting in Week 1 … without ace receiving back Austin Ekeler for six games.

Now in his second season, Herbert could take a massive leap forward, especially with new offensive coordinator Joe Lombardi, who was the Saints quarterbacks coach when Brees passed for 5,000 yards seemingly every other year.

In his ADP Decisions series piece looking at Herbert vs. Russell Wilson, Adam Pfeifer notes that the Chargers offensive line should be markedly better this year:

“Herbert was under pressure on 36.8% of his dropbacks, which was the 10th-highest rate among qualified quarterbacks. Los Angeles, however, continues to address the offensive line, adding center Corey Linsley and Rashawn Slater during the offseason. Linsley was PFF’s top-graded center in football last season. Slater, meanwhile, opted out in 2020 but when we last saw him in 2019, he was dominant, allowing zero sacks and just six pressures in over 350 pass-blocking snaps. This offensive line truly has a chance to step into the elite territory in the league, which will obviously be great for Herbert’s potential. As a result, I think we see Herbert have more time in the pocket, which will lead to more deep attempts. Only 10.4% of his pass attempts traveled 20 yards or more down the field last season, which ranked just 19th in the league.”

Herbert’s passing ceiling is the sky in 2021.

Get it? It’s a pun — because Russell Wilson cooks. Get it?

I’ve already written about Wilson in multiple places for FTN. He’s one of my five upside quarterbacks to draft, and one of my 10 bold calls for 2021 is that Wilson will be the No. 1 fantasy quarterback.

If that happens, that will of course be a ceiling outcome. His median projection is more modest, which is why I’m middling his passing prop (under 4,300.5 yards at BetMGM, over 4,020.5 at FOX Bet).

But I’m also a degenerate — so I’m betting on Wilson to lead the league in passing. As I noted in July on the Fade the Chalk podcast, 2021 may be the year that Wilson stays in the kitchen and cooks for the entire campaign.

Here’s some of what I had to say about Wilson in my bold calls piece:

“Wide receiver DK Metcalf should enter his full studness this season as a third-year professional. With Metcalf’s ability to make plays, Wilson will have an incredibly high week-to-week ceiling.

And I expect the Seahawks to lean on the passing attack. This offseason, they replaced run-focused offensive playcaller Brian Schottenheimer with Shane Waldron, who coordinated the Rams passing game the past few years. Additionally, this offseason they gave wide receiver Tyler Lockett a four-year, $69.2 million contract extension with $37 million guaranteed and added dynamic tight end Gerald Everett via free agency.

On top of that, the Seahawks selected wide receiver D'Wayne Eskridge in Round 2 with their first pick of the 2021 draft, even though they already had Metcalf, Lockett and Everett.

Given the recent investments the Seahawks have made in the passing game, they might finally be willing to go all-in on Wilson as a high-volume passer.

Last year, he was No. 1 in the league with 59 end-zone targets and No. 6 with 948 yards passing on attempts of 20-plus yards. If Wilson throws the ball even a little more in 2021, he could annihilate expectations.”

At +4400, Wilson has just a 2.22% implied probability to lead the league in passing, and that’s far too low for a player with Wilson’s talent, especially given his receivers and new playcaller.

Think of Tua Tagovailoa as the discounted, arbitrage version of Herbert: He’s a second-year passer with talented receivers around him and a new offensive playcaller.

Not all that long ago, Tagovailoa was thought of as one of the best college quarterbacks of his era. At Alabama, he had an outrageous 12.7 adjusted yards per attempt for his career.

Given his odds, I’m willing to write off the entirety of his rookie season — especially since Tagovailoa was coming back from a devastating hip injury, which threatened to derail his career.

And with the offseason additions of wide receivers Will Fuller and Jaylen Waddle, Tagovailoa now has one of the NFL’s most dynamic pass-catching units.

Tagovailoa is one of Nelson Sousa’s late-round fantasy draft targets, and that’s good enough for me. If Tagovailoa balls out in 2021, it will likely be thanks to his arm and not his legs.

If a player is drastically mispriced, it’s almost always at one of the extreme probabilistic ends, when he’s either highly likely or highly unlikely to do something. I believe we’re in that situation with Lock. He’s 400 to 1, but I think he should realistically be closer to 125 to 1.

If he actually somehow leads the league in passing, the upside for us will be transcendent — and it could happen.

After the Buccaneers, the Broncos might have the league’s best all-around skill-position supporting cast.

Lock has to beat out Teddy Bridgewater — and maybe that won’t happen — but if he is the Week 1 starter, and if he progresses in his second season in offensive coordinator Pat Shurmur’s system, then he has the surrounding talent and gunslinging mentality to succeed.