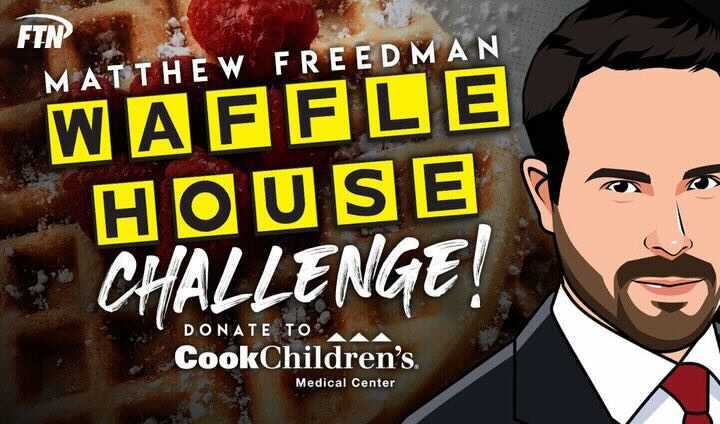 On Monday, Aug. 9, I am doing the Waffle House Challenge to raise money for Cook Children’s Medical Center, a not-for-profit pediatric hospital in Fort Worth, Texas.

Barring the unforeseen, the event will take place at Waffle House No. 861 in Burleson, Texas, at 405 E. Renfro St.

I was born in Fort Worth and raised in the adjoining town of Burleson, so Cook Children’s Hospital (as well as this particular Waffle House) holds a special place in my soon-to-be artery-clogged heart.

Throughout the day, which I plan to start very early (time to be determined by my dog), I will provide regular updates here as well as on my personal @MattFtheOracle Twitter account, where I will live stream each waffle I eat and announce the recipients of various prizes I will give away.

Check back in regularly.

I explained the situation to the servers, who are totally cool with it.

I took down my first waffle.

I'm pacing myself, getting everything set up, responding to people on social media.

I realize that if I do Twitter Live to stream whenever I eat a waffle, people can see it while I'm streaming but they can't see it afterwards, which isn't great.

From now on, I'll record myself eating waffles and then post the videos to Twitter so they'll be viewable forever. If I ever have kids, I want them to be able to see what their father once did, right?

UPDATE 9 AM ET: Waffle No. 2 has been consumed.

Moving forward, I think I will show videos for each half waffle I eat, since I can post videos no longer than 2:20, and eating an entire waffle in 140 seconds isn't the easiest thing to do.

Random note: When I was at TCU I was in a fraternity (Sigma Phi Epsilon), and our philanthropy raised money each year for Cook Children's.

When I decided that I would be doing the challenge near Fort Worth and donating money to Cook Children's, I contacted the alumni and the undergraduate chapter to let them know.

So the chapter president is now at Waffle House with me  to provide moral support, eat waffles, ask questions about the old days, and pump me for fantasy football information.

If you told College Freedman what Future Freedman's life would be, he would not believe you.

I'm starting to slow down, so it would be impossible right now for me to eat a whole waffle in  2:20.

UPDATE 10:30 AM ET: Someone just asked me if I've ever seen the pancakes episode on Comedy Central.

Dude, don't talk to me about pancakes right now.

Also, that makes me think of the time I went to this very Waffle House with a group of high school friends. For one of the guys, it was his first time at Waffle House.

He asked our server if he could have some pancakes.

She gave him one of the coldest glares I've ever seen and said, “This is Waffle House.”

This is the way.

Five hours in, four waffles down.

I don't yet regret this, but I'm not thrilled with the decision-making process that led me to this spot.

UPDATE 12:00 PM ET: I think I'll take a break on the waffles for a little bit so I can concentrate on giving away the subscriptions that have been donated by the various sponsors.

Also, I just don't feel like eating a waffle right now. So there's that.

UPDATE 1:15 PM ET: It's official – Cook Children's Medical Center is sort of happy to be associated with me!

Also, right as the Cook Children's donations coordinator arrived, so did an onslaught of undergraduate fraternity bros.

That was … not the best look.

No doubt in my mind that seven waffles at a minimum is a lock.

By the way, the ambience in the Burleson Waffle House is exactly what I thought it would be.

Right now, the four guys sitting at the counter are talking about Johnny Cash and debating whether or not he fought in the Korean War when he was in the armed services.

I love this town, state, and country. And I love Waffle House.

In other news, I'm taking another waffle break so I can focus on giving away subscriptions donated by the sponsors.

UPDATE 6:30 pm ET: I had planned on taking a waffle-eating break, but fate had other plans for me.

What a sweet, innocent-looking waffle.

One note:  The sun is really hitting me right now, as you can see in this video …

… and the air conditioner in this Waffle House is working at about half capacity (per the grill chief).

… so sweat is basically oozing out of me.

Doesn't matter. Eye on the prize.

No doubt about it: My projected total of 7.5 waffles -- I'm hitting the over.

UPDATE 8:00 PM ET: There have been developments.

And as if that's not bad enough.

Even so, the challenge continues.

What happens when you hear “Enter Sandman”?

You know it's over.

As I ate Waffle No. 8, the little pooper's grandmother sang along to “Enter Sandman” in the background.

All is right with the world.

The onslaught is on.

UPDATE 9:30 PM ET: This is the way a champion closes it out.

Now it's time to order that to-go waffle for Mama Lynn.

Various people and websites in the fantasy industry have been generous enough to donate subscriptions (collectively valued at thousands of dollars) for me to give away.

Thank you for any amount you feel comfortable donating. I assure you, 100% of what you give will go directly to Cook Children's and the kids.

A day in the life of Matthew Freedman at Waffle House

Depending on the time I wake up and how many waffles I eat during the day, I will likely arrive at Waffle House anywhere from 4 to 7 a.m. and leave anywhere from 10 p.m. to midnight (Central Time).

During the day I plan to have these scheduled events (Eastern Time).

I will also regularly throughout the day live stream each waffle I eat and give various prizes away on Twitter.

If you want to participate in the subscriber-only Discord AMA at 2 p.m., subscribe to FTNFantasy.

While I’m at Waffle House, feel free to join me if you are in the Metroplex (a.k.a. the Dallas-Fort Worth area), and we can talk some fantasy football and sports betting! — but only if you …

We gotta make that money and keep the waitstaff happy.

Many of you I’m sure have heard of the Waffle House challenge: It has recently become a not-uncommon punishment for fantasy losers. If you finish last in your league, then you spend 24 hours in a Waffle House, minus one hour for each waffle you consume.

I think I first learned about it when Michael Carsley did the Waffle House challenge in January (people who watched his livestream donated $1,000 to be used as a tip for his server).

And then in June it gained national attention again when investigative reporter Lee Sanderlin documented his experience of the Waffle House challenge on Twitter.

By the way, Sanderlin’s Waffle House piece in the Mississippi Clarion Ledger is delightful. One of my favorite articles of the past few months.

And yet as heroic as Carsley and Sanderlin were in their performances, I felt that both men approached the Waffle House challenge without much nuance or planning. Entering the challenge, they failed — in my opinion — to apply strategy to the reality of their situation.

And so, bit-chasing and all-around degenerate man of the people that I am, in mid-June I wrote a Twitter thread outlining my thoughts on the optimal way to approach the Waffle House challenge.

I actually wrote almost all of the thread twice because I accidentally deleted it the first time. (I am barely intelligent.) At the end of my second version of the thread, I had 24 tweets, and I thought, “Nah, that simply won’t do. How can I make this useless, should’ve-been-two-tweet thread even longer and less practical?”

Don’t misunderstand me: My ideas are probably worthless anyway — but, still, people should walk their talk, and that’s what I’m doing.

As outlined in my tweet thread, this challenge is more about being in one place for an extended duration of time and less about eating a lot of waffles.

So, first, I’m planning to be at Waffle House for a long time.

Second, I’m putting myself in the mental mindset that while at Waffle House I will experience something extremely (maybe even intensely) enjoyable — the danger of indulgence.

Third, I’m physically preparing for the challenge: I will have 12-plus hours of fasting under my belt (literally) when I walk into Waffle House, and that will be important, because the classic waffle is approximately 410 calories (I’m assuming that’s without butter and syrup), which means I’ll be taking in a frighteningly high amount of calories.

Plus, I will go to bed early the night before the challenge, and then I’ll go to Waffle House right away after waking up so I can be as fresh as possible for my delightful day of leisure.

That’s the strategy: Sophisticated in its simplicity (hopefully).

Why is Matthew Freedman doing the Waffle House Challenge in Texas when he lives in Iowa?

When I tweeted the original Waffle House Challenge thread, I lived in Minnesota, but I was about to move to Iowa. Either way, Minnesota or Iowa, there isn’t a Waffle House anywhere close to there.

Did the official corporate Waffle House account troll me over that fact?

It is what it is.

Since I grew up in Texas, where Waffle Houses are everywhere, and since I was planning to visit my parents anyway near the end of summer, I figured it made sense to eat two waffles with one mouth and do the challenge at my hometown Waffle House in Burleson.

And then once I knew I’d be eating waffles in Texas, having Cook Children’s as the charity was an easy choice.

That’s why I’m doing the Waffle House challenge in Texas … in case anyone was wondering.

How many waffles does Matthew Freedman think he will eat?

In my original thread, I outlined a schedule for eating seven waffles in 17 hours. I think that could be done fairly comfortably.

That said, I get that some people plan to donate to Cook Children’s based on the number of waffles I eat — and, also, it’s possible that once I’ve spent hours at Waffle House I will simply want to down as many waffles as I can so I can get out of there.

So I’m opening the betting line at 7.5 waffles, and wherever the market takes the line is where it goes.

Some sharp people expect me to go over …