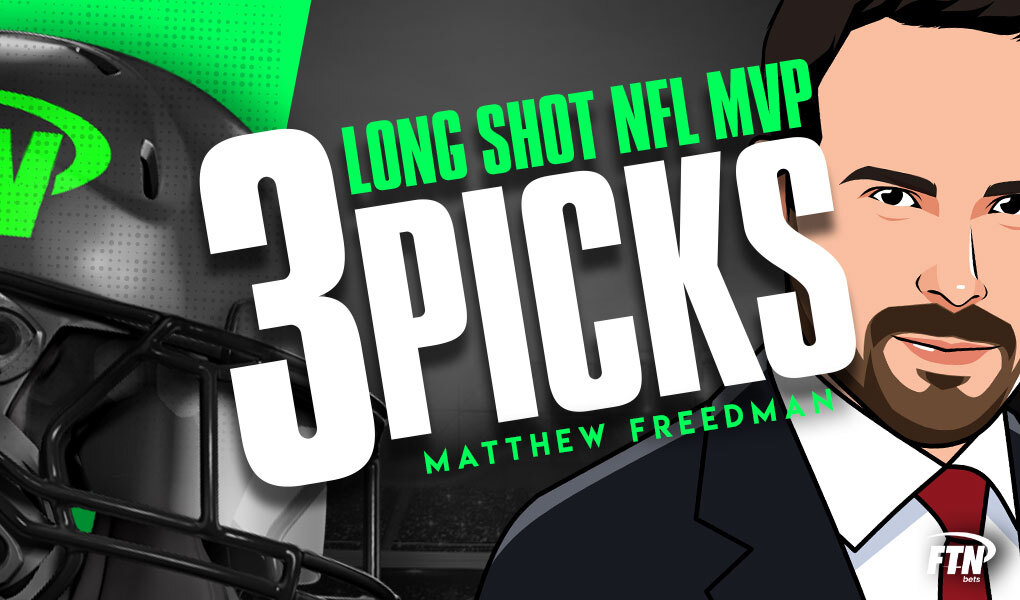 FTN's Matthew Freedman picks out three of his favorite long-shot MVP candidates to bet on for the 2021 NFL season.

As I’ve mentioned in my pieces on longshot quarterbacks to lead the NFL in passing and longshot running backs to lead the league in rushing, I view season-long player futures more as profitable entertainments and less as hardcore investments.

That doesn’t mean I bet willy nilly without any regards to probabilities and likelihoods, but it does mean that I tend to gravitate toward players who have longer odds (+1000 or higher).

By the way, that’s definitely the first time I’ve ever used “willy nilly” in writing, so cash that ticket.

Do the longshot bets usually hit?

No, that’s why they’re longshots.

But I hit on Lamar Jackson as a +8000 longshot to win MVP two years ago, and Patrick Mahomes also entered the season as a longshot when he won MVP the year prior.

You don’t need to hit on longshot bets all that often to be a successful futures bettor.

I currently have one longshot MVP bet for 2021: Jalen Hurts at +10000 at DraftKings Sportsbook.

In our Prop Shop Tool, the best line I see for Hurts right now is +8000 at BetMGM. I’m not looking to invest at that number, but here are three MVP bets I’m adding to my futures portfolio at odds no shorter than +15000, with their implied probabilities from our new Betting Odds Calculator.

I already have a +40000 ticket on Drew Lock to lead the league in passing yards, so I’m probably more bullish on him than most people are.

For a player to have a real chance to win MVP in today’s NFL, he must satisfy four requirements.

In betting on MVP, too many people focus on No. 4 and ignore the utter importance of Nos. 1-3.

Yes, a guy must have good statistics to win the award — but each year, a number of guys have MVP-worthy production. What separates them is Nos. 1-3.

If Lock beats out Teddy Bridgewater to be the Week 1 starter, and if he progresses in his second season with offensive coordinator Pat Shurmur, then he could be a surprise producer.

After the Buccaneers, the Broncos might have the league’s best all-around skill-position supporting cast:

And Lock last year was No. 2 (behind only Tom Brady) with an 8.89-yard average depth of target (per our Advanced Passing Stats Tool).

And if Lock produces, the other factors might all fall into place: He’ll be a third-year quarterback who won a training camp and overcame early-career struggles to produce at a high level, and with their defense the Broncos could have a shot at a top-two seed as long as their offense improves.

I’m not going to make too much of Lock’s preseason Week 1 stats — but his 151-yard, two-touchdown performance was encouraging.

Taysom Hill is one of my favorite upside quarterbacks for 2021 fantasy football. He’s not guaranteed to start in Week 1, but he started the first game of the preseason, and when franchise quarterback Drew Brees missed four games last year, it was Hill — not Jameis Winston — who started in his place.

When you look at the evidence we have to go on, Hill looks like the Week 1 starter.

As the predecessor to Brees and supported by a top-eight defense, Hill could have the narrative and playoff seeding necessary to win the MVP award.

Ryan Fitzpatrick is one of the same faces/new places players I’m happy to roster in fantasy and back in the betting market. He has a strong collection of pass-catching talent with wide receivers Terry McLaurin and Curtis Samuel, tight end Logan Thomas and running backs Antonio Gibson and J.D. McKissic.

And he has the YOLO-imbued ability to get hot and play above his level for an extended run.

Fitzpatrick isn’t young, but over the past three years he is No. 9 with 7.87 adjusted yards per attempt (among all quarterbacks with 100 passes). He can still sling it.

Here’s what Derek Brown has to say about Fitzpatrick in his Football Team coaching and coordinator breakdown (excerpted):

“’The Beard Magic Maestro’ has tangible upside in this offense. Last year in Weeks 1-6, he was the QB12 in fantasy points per game with a less-than-stellar cast surrounding him in Miami and an antiquated system by Chan Gailey. In Scott Turner’s scheme, he is due for multiple spike weeks, and if he’s able to minimize turnovers and hold the job for the entire season he could be a fantastic late-round value."

Check out the entirety of Derek’s coaching and coordinator series.

What I like most about Fitzpatrick is his narrative: He’s a journeyman near the end of the road, he’s beloved by fans because of his Harvard-yet-everyman personality, and he’s playing for a football team that barely has a name.

Playing in the weak NFC East, Fitzpatrick and the Football Team — backed by a stout defense — could make a serious run during the season and win 12-plus games.

If that happens, Fitzpatrick could find himself in a 2002 Rich Gannon-esque MVP-winning situation.