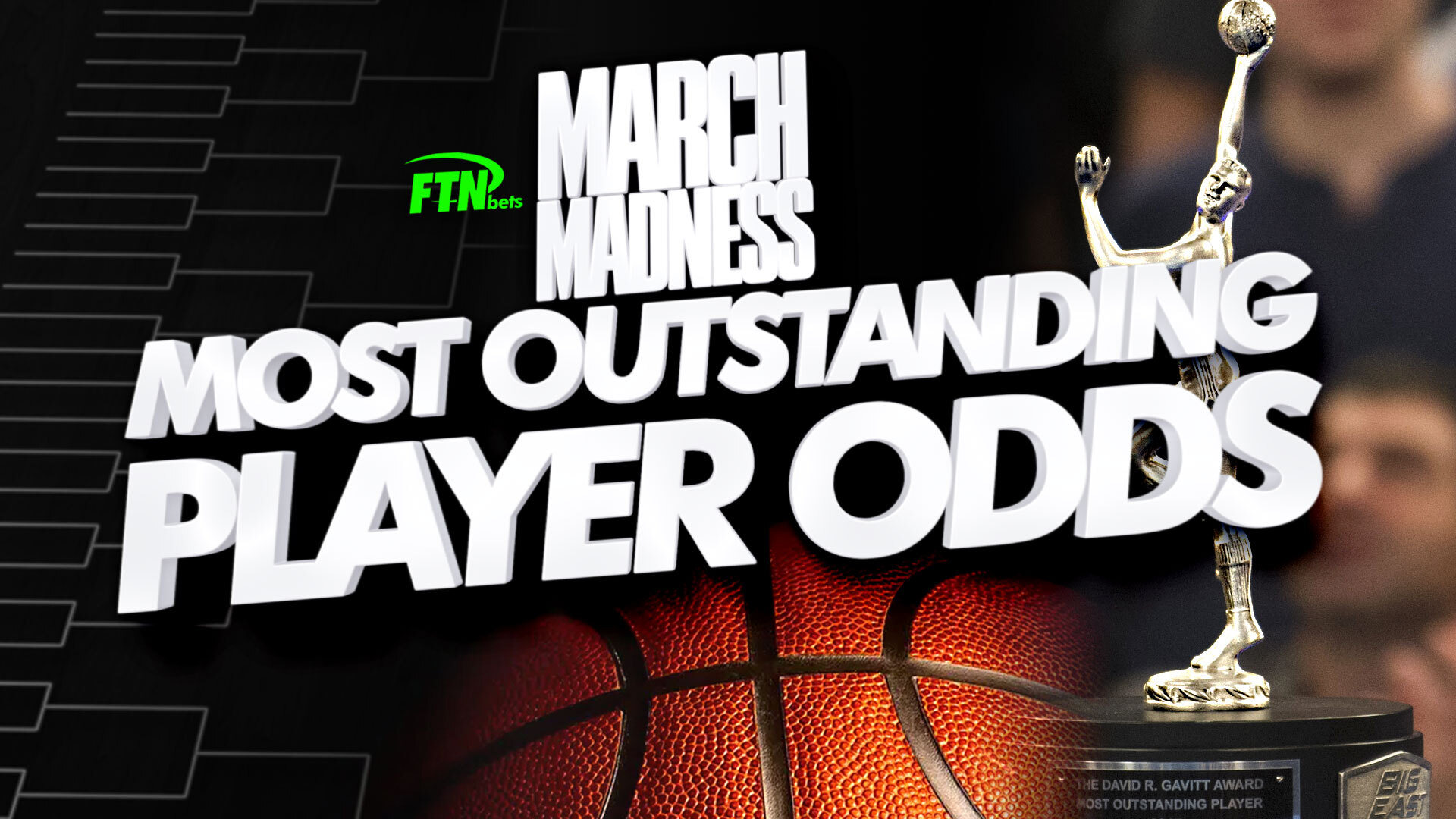 Who will take home the title of Most Outstanding Player in this year's March Madness? FTN's Gilles Gallant breaks down the odds.

Winning the NCAA Men’s Basketball Tournament is already a fantastic feat by itself, but to be the player who drives his team to victory is icing on the cake. Duke Blue Devils forward Paulo Banchero is one player who sportsbooks think will have his cake and eat it too and have tabbed him as the betting favorite for March Madness Most Outstanding Player odds.

According to the latest betting odds from BetMGM, Banchero is a +300 favorite for odds to win March Madness Outstanding Player and lead Duke to a national championship. The Blue Devils were a 2-seed in the March Madness tourney and have advanced to the Final Four for the 13th time in program history.  Banchero leads the team in scoring and is trying to get Duke a national championship for what is expected to be head coach Mike Krzyzewski's final season in Durham.

Sportsbooks like BetMGM must feel pretty confident in  a potential Duke vs. Kansas March Madness final as Kansas senior Ochai Agbaji is the second player on the list for odds to win Most Outstanding Player. Agbaji was a finalist for Wooden National Player of the Year and scored 18 points in a decisive win over Miami to help Kansas advance to the Final Four.

Another senior with the Villanova Wildcats is third on the oddsboard for Most Outstanding Player in Collin Gillespie at +800. The fifth-year senior has been a driving force of this Wildcats program during his tenure and even though he had an underwhelming showing in the Elite Eight, he'll be counted on even more going forward with Justin Moore likely sidelined for the remainder of the tourney.

As for North Carolina, the top candidate to win the hardware for Most Outstanding Player odds is third-year center, Armando Bacot at +1400. The former McDonalds All-American has finally shown promise with the Tar Heels after being a top recruit and put up an insane 20 points and 22 rebounds in an Elite Eight win over Saint Peter's .

Here are the top players on the oddsboard from BetMGM to win NCAA March Madness Most Outstanding Player:

Why is Paulo Banchero Favored for March Madness Most Outstanding Player Odds?

With Duke being favored to cut down the nets in the NCAA March Madness championship game, it makes sense for the Blue Devils’ “best” player to be favored for Final Four Most Outstanding Player odds. That man is Paulo Banchero with +300 odds to nab the hardware. The freshman has been a do-it-all forward in his brief time with the Blue Devils and is a consensus choice to be a top-five pick in the upcoming NBA Draft.

Banchero led the team in scoring and rebounding during the regular season and has carried that over into March Madness. He's scored at least 16 points in each tourney game while shooting just over 50% from behind the arc through four games. While he will likely be heavily involved in any success Duke continues to have in this tourney, I'd be remiss if I didn't mention his teammates in center Mark Williams (+1800), guard Jeremy Roach (+2200) and AJ Griffin (+2500). All four of the Dookies are expected to be one-and-dones after this college season and each has the ability to get hot and completely change a game. This is why I'd be cautious about going all-in on Banchero because voters for Most Outstanding Player Odds may attribute success to another high-end talent

When making bets for March Madness MOP odds, you can likely get better value on taking the best player of a team that wins the national championship as opposed to taking the team by itself. Well, prior to the Sweet 16 matchups, I locked in two long shots to win Most Outstanding Player and each is still alive heading into the third weekend of March Madness.

Villanova’s recent track record in March Madness means considering them to win the NCAA National Championship isn’t really a hot take. They’ve won two natties in the last five years and it’s usually from steady guard play who can push the ball and make outside shots. Enter Collin Gillespie. The senior had a decent rebound season with the Wildcats after tearing his ACL last year and leads the team in scoring at 16 points per game.

His ability to be a playmaker, shot taker and sound defense on the perimeter make him a sound pick at +2100 odds, especially since ‘Nova’s March Madness odds are +1600. If you think Villanova takes down Michigan and can win four more games in this tourney, Gillespie is the best way to maximize the betting value.

Brady Manek may not look like a stud with his long locks and lanky frame, but the North Carolina forward can fill up the stat sheet in a hurry. In two tourney games in 2022, he’s scored a combined 52 points along with 16 rebounds and five assists. What might be most impressive about Manek is his shot-making prowess behind the arc. He’s nine 3PT shots in those games on 18 attempts while shooting 39.5% from deep this season.

Even though he got tossed from the Baylor game for a blatant elbow, his ruggedness in the paint along with his ability to spread the floor would be a key reason for North Carolina to win the NCAA Championship. With the Tar Heels odds at +3000, take Manek instead for MOP odds if you think UNC goes all the way.

Betting on the NCAA Men’s Basketball Most Outstanding Player Odds is a decent way for bettors to get extra value for their tournament winner pick. The odds for the player are typically inflated which can allow new and seasoned bettors to find profitable angle. Below, FTNBets will show you how the odds work, what they mean and what you’d be rewarded if you make a winning pick for March Madness Most Outstanding Player odds.

When you go to an online sportsbook like FanDuel that offers odds to win March Madness Most Outstanding Player, you’ll see the betting odds listed like this:

These numbers beside the players are called American Odds and are based on individual $100 bets. It indicates what you would get paid if you hit that winning bet. The player with the lowest number beside them is considered the betting favorite for this market. In this case, the favorite is Drew Timme of Gonzaga.

Let’s say you think Gonzaga will win the NCAA National Championship and Timme will be named Most Outstanding Player of the Final Four. If you were to bet $100 on Timme and he wins the award, your sportsbook would reward you with $650 — your $100 bet is returned, and you win $550 in profit.

To see how much you’d win on the MOP odds, check out our Parlay Calculator. It’ll show you what your payout would be based on the odds and amount wagered.

An important note to keep in mind is this award is voted on for players who play and win their Final Four matchups. Anything a player does leading into the Final Four is not up for consideration by MOP voters. It is also typically awarded to the player from the championship team — the last time a player won that wasn’t on the winning team was Akeem Olajuwon in 1983. Keep that in mind when placing bets on March Madness Most Outstanding Player Odds.