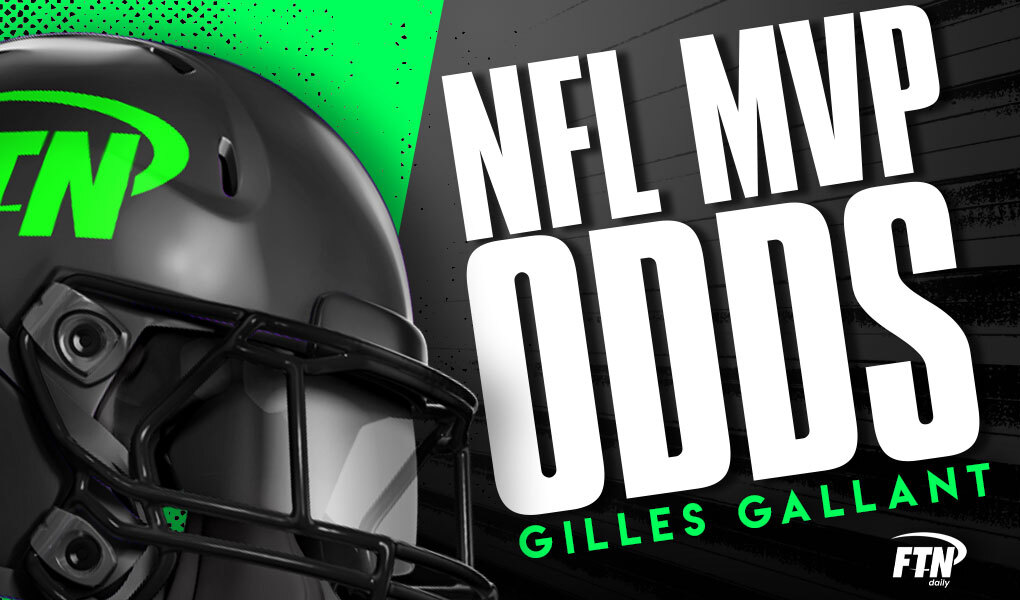 Bet on 2021 NFL MVP odds with expert advice and handicapping. Get the latest betting news on odds to win NFL MVP with FTNBets.

With only one week remaining in the 2021 NFL regular season, and one quarterback with the Green Bay Packers has let everyone know he's still the king and is heavily favored for 2021 NFL MVP odds.

Packers QB Aaron Rodgers has continued to shine in the second half of the 2021 season and is now listed at -400 at sportsbooks like BetMGM for odds to win NFL MVP.  Rodgers has thrown 18 TDs in just his last six games while not having a brainfart and throwing an interception. Rodgers has won three NFL MVP trophies in his career and would be the first repeat winner since 2008-2009. He opened at +1500 odds to win it again in 2021.

Right behind Rodgers is Tampa Bay Buccaneers quarterback Tom Brady, who was the odds-on favorite two weeks ago but has since dropped to +550. Brady had one of his worst games in his NFL career in Week 15 when the Bucs were shut out by the New Orleans Saints. and now has the Panthers on deck for the season finale in Week 18.

Not far behind those two is a running back trying to stake his claim as the best in the NFL in Indianapolis Colts running back Jonathan Taylor. The second-year RB has exploded this year with 20 touchdowns and leads the NFL in rushing yards.  It's not a coincidence that once he started scoring TDs, the Colts began to win games.

After these three candidates are two more quarterbacks in Cincinnati Bengals Joe Burrow (+1400) and and Buffalo Bills QB Josh Allen (+4000). They round out the top five contenders for NFL MVP odds.

Below, I’ll break down the latest NFL MVP odds movement and why Rodgers should be the favorite for odds to win NFL MVP.

For now, here are the top 15 players listed at BetMGM for NFL MVP odds — you can find the full list of candidates at the sportsbook.

These are the current odds to win the 2021 NFL MVP, per BetMGM.

Now that we’re 17 weeks into the season and we’ve seemingly witnessed highs and lows of each franchise, the landscape for NFL MVP odds makes a lot of sense when you look at the standings and the NFL Most Valuable Player odds. It's telling that when you look at the remaining 12 options available at BetMGM for odds to win NFL MVP that only 2  of the betting options aren't quarterbacks.

Each player in the top five on the oddsboard is on a team with a winning record and, outside of Taylor with the Colts, leads their respective division. It’s not rocket science -- If your team plays well, the quarterback is going to shine.

Packers QB Aaron Rodgers may be in the headlines for the wrong reasons due to his stance on Covid-19 but one thing's for sure, he's still the top dog in the NFL when it comes to elevating the talent around him. Rodgers has 35 passing TDs this season despite doing most of this on a broken toe and has steered the Pack to the best record in the NFC for a second-straight year.  At -400, it would take a monumental collapse for Rodgers not to win NFL MVP again although the door is open with the Packers likely resting starters in Week 18.

Buccaneers QB Tom Brady continues to age like a fine wine and has 40 passing TDs and 4,990 yards which are both tops in the NFL while also playing for a team that is 12-4 and is second in the NFC standings.

The biggest NFL MVP odds movement we’ve seen since the start of the season has to be with In Indianapolis Colts running back Jonathan Taylor. The second-year back wasn't even in the MVP odds discussion prior to the season and had +200000 prior to Week 4. In the 12 games that followed, Taylor has scored 20 touchdowns and rushed for 1,626 yards. His odds are now down to +140, and he can be the first running back since Adrian Peterson in 2012 to win NFL MVP.

As for who has dropped and risen in the odds, look no further than Patrick Mahomes. After opening as the +600 fave, he’s since dropped to +5000 for NFL MVP odds entering Week 18. His odds were as high as +6500 prior to the Week 10 win over the Raiders and were the largest NFL MVP odds for Mahomes he’s ever had in his career as a starting NFL quarterback. Mahomes already has 13 interceptions in 2021, which surpasses his total INTs thrown just in 2019 and 2020 combined.

How to Bet on NFL MVP Odds

Understanding NFL futures odds and other season-long betting markets can be worthwhile to invest in as they can be very lucrative with profits. One of the best examples of this is NFL Most Valuable Player odds because they fluctuate from week-to-week and can change drastically on a respective week’s results.

The numbers listed beside them are considered American odds and would determine payouts for winning $100 bets. The player with the lowest numbers beside them would be considered the betting favorites. In this case, it’s Kyler Murray and Dak Prescott.

Let’s say you bet $100 on Kyler Murray for NFL MVP odds and he wins the award. Your sportsbook would pay you $500 to your betting account - your original $100 is returned and you’d get $400 in profit.

If you think Patrick Mahomes will win the 2021 NFL MVP award and you were to bet $100 on him, that would payout $1,700 to your sportsbook account. Your $100 original bet is refunded and you’d receive $1,600 in winnings for your correct bet.

The FTNBets Parlay Calculator can show you how much you’d win based on the odds and amount wagered.