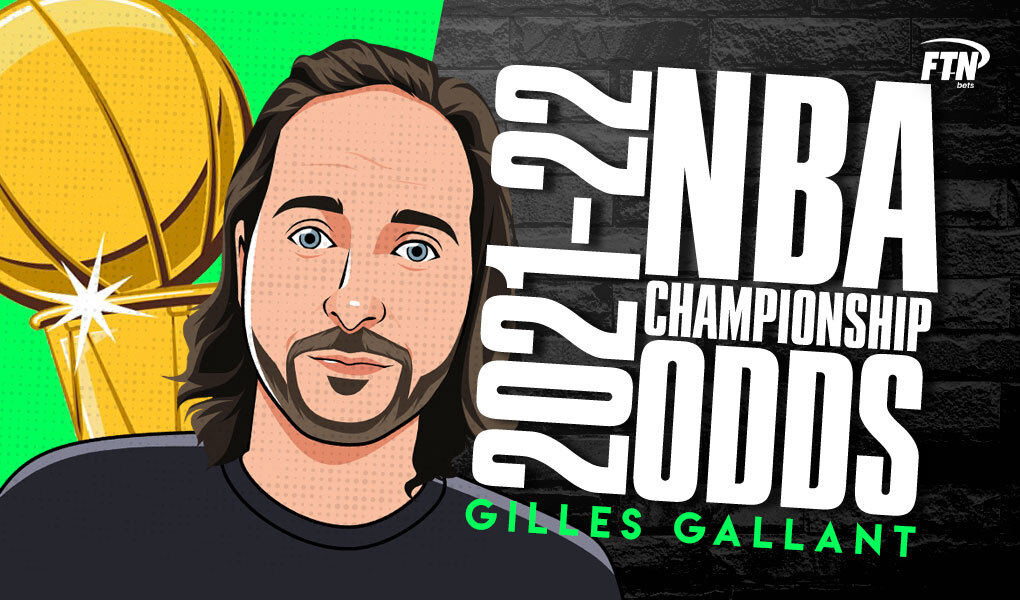 FTNBets has got you covered for 2022 NBA Championship odds. See all 30 teams NBA title odds with expert analysis and betting picks.

We're on the final leg of the 75th NBA season, which mean sportsbooks are taking more bets on NBA Championship odds. They have tabbed the Phoenix Suns as betting faves to win it all.

The Suns are now +320 favorites (23.8%) for odds to win the NBA Championship at BetMGM after making the NBA Finals and falling short to the Milwaukee Bucks a season ago. The Suns currently have the best record in the NBA but will be without star point guard Chris Paul until April with a thumb injury.

That’s why a team like the Brooklyn Nets are right behind the Suns  for NBA Championship odds at +600. The Nets look to finding their groove with Kevin Durant leading the way and Kyrie Irving at least being able to play in home games. Brooklyn still has yet to have recently acquired Ben Simmons on the court due to a back injury which gives the Nets some upside heading into the playoffs.

The Golden State Warriors are third for odds to win the NBA Championship and are dealing with their own injury woes after superstar Steph Curry injured his knee. He's expected to be out for the remainder of the regular season, but sportsbooks don't seem to be deterred about the Dubs' NBA title chances by listing them at +650 to win it all.

The reigning champion Milwaukee Bucks (+600) are the fourth team on the list for odds to win the NBA title. They defied the odds and became the fifth team in league history to come back from 0-2 in the NBA Finals and go on to win the title. With the band back together again, there’s no reason to doubt the Bucks chances after NBA Finals MVP Giannis Antetokounmpo’s god-like emergence.

Let’s break down why the Suns should be the betting favorites and try to identify a team that could make an NBA Finals odds long-shot push like Phoenix did last year and Miami did the year before.

Why Are Phoenix Suns Favored for NBA Championship Odds?

Aside from having the best record in the NBA, the Phoenix Suns looked primed for another climb to the mountaintop as betting favorites for odds to win the NBA Championship. The Suns have a loaded roster with NBA All-Stars and key role players that have overwhelmed even the top teams in the league which is why Phoenix has the best point-differential at +7.8.

In order to be ranked highly for point differential, you need to be solid on offense and defense, which fits the Suns’ description. They rank fourth in points scored per game (114.9) while ranking sixth on scoring defense by holding opponents to 106.5 PPG. That’s an elite formula to have a great regular season record.

The elephant in the room is the recent bad news of superstar point guard Chris Paul having to miss time due to a thumb injury. It could be argued it might be a good thing to rest CP3 at this stage and have him ready for the playoffs but it’s not a guarantee he’ll be back up to speed by April. That being said, the Suns have held down the fort quite nicely in his absence, winning 10 of 14 games without the All-Star.

At +320, it’s not the best odds to want to bet on the Suns at this stage because of the Paul injury, so closely monitor the NBA Championship odds as we get near the end of the season. If you still think the Suns are the team to beat, now is the time to grab them as the odds will only decrease as we get deeper into the NBA Playoffs.

After five straight NBA Finals appearances from 2014-2015 to 2018-2019,  the resurgence of the Golden State Warriors this season has been truly remarkable. The Warriors came out of the gates firing for the 2021-2022 NBA campaign and sit pretty in the Western Conference at 47-25 through 72 games. Why the record is impressive is Golden State accomplished most of that without having Klay Thompson in the lineup or 2020 second overall pick James Wiseman.

Those two were set to be the Warriors “aces in the hole” if the team started slow and were treading water in the standings. Well, Thompson has looked rusty through 26 games but has had flashes of his former self, while Wiseman isn't expected to return to the lineup at all this season. The Warriors keep winning, even with point forward Draymond Green missing six weeks of action before returning in mid-March.

Once those three are all fixtures in the lineup again, it's difficult to put a ceiling on how far the Dubs can go because of point guard Stephen Curry. The former NBA MVP might be having his worst shooting season of his career at 43.3% field-goal percentage, but it hasn’t really mattered because the threat of him shooting still dictates opposing defenses. Recent reports have him coming back at the conclusion of the regular season.

Golden State ranks fifth in opponent points per game, second in opponent field goal percentage and first in opponent three-point percentage. That's a title-winning defense and the offense hasn't reached its full potential. At +650, this is either a great buy-low spot or a disaster if Curry isn't Curry in the postseason.

How Does the Harden-Simmons Trade Affect Brooklyn and Philadelphia’s NBA Title Odds?

One of the few trades that seems to make both teams better in the short term and long term, the James Harden and Ben Simmons trades sent ripple effects through the entire NBA Championship odds. The Nets were the betting faves for NBA Championship odds at +350 prior to the trade but have seen it shift to +600. Those odds many not stay there for long as superstar Kevin Durant looks to not have missed a beat and is putting up video-game numbers in his return (30 points, 55% shooting) with the Nets going 6-3 in those games.

Kyrie Irving has yet to be allowed to play home games due to the state of New York’s vaccination mandate, but when he does get on the floor, he's still a problem for opposing defenses. In 19 games, he's scoring 27.7 points per game while shooting 43% from behind the arc. Simmons was on the sideline for the anticipated Nets-Sixers matchup in Philadelphia and its unclear when he will return to the lineup. Having a playmaker and defender like Simmons could ease some of the burden on Durant/Irving along with key shooters like Seth Curry and Patty Mills.

What isn’t unknown is that James Harden will be the best player that Philadelphia 76ers center Joel Embiid has ever played with on the Sixers. Harden may not be in his prime anymore at 32 years old, but he’s still an elite shotmaker on the perimeter and will only aid Embiid’s offensive ability. Having two superstars has been the winning recipe for GM Daryl Morey and could help push the Sixers over the top. Philly was hovering around +1500 prior to the trade and has seen their NBA Championship odds fall all the way to +800.

The time has come for you to bet on the 2022 NBA Championship odds but you don’t know where to start or what the numbers beside the teams mean. No problem because FTNBets will explain it below. The first thing a new bettor needs to do is set up a sportsbook account that is available in your state and then deposit money to bet with. Once that’s complete, you’re ready to bet on odds to win the NBA Championship.

The numbers beside each team represent American odds, which means it’s what your potential payout would be if you were to bet $100 on that option. The team with the lowest number beside them is considered the betting favorite for this market. In this case, that’s the Brooklyn Nets at +240.

If you think the Brooklyn Nets will win the 2021-2022 NBA Championship and you bet $100 on them, you’d win $340 from your sportsbook — your $100 is returned and you’re rewarded with $300 in profit. On the flip side, let’s say you think the Golden State Warriors will return to championship glory and you bet on them for NBA title odds, you’d win $1000 in profit for a $100 bet from your sportsbook.