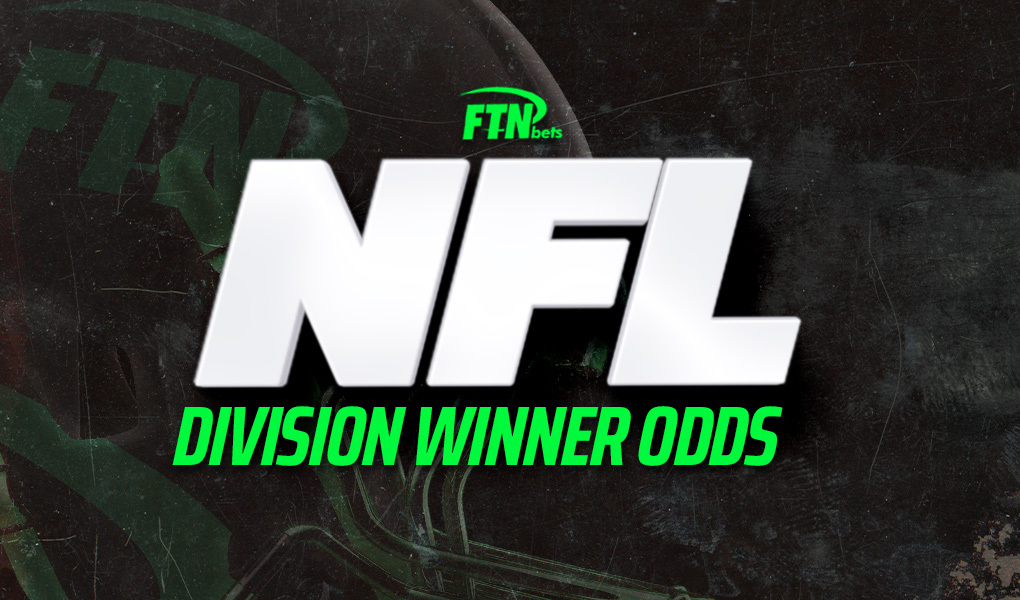 FTN's Tony Riccobono runs through the odds to win each NFL division in 2022 and picks out his best bets.

The 2022 NFL season is more than halfway complete, and a few teams are viewed as virtual locks to become division champions. The Minnesota Vikings and Kansas City Chiefs are massive favorites to win their respective divisions.

The Vikings lead all teams with -5000 odds (98.04% implied probability) at BetMGM to finish the season as a division winner. Minnesota suffered one loss in the first 10 weeks, building what could be an insurmountable lead over the struggling Green Bay Packers. The Vikings are the only NFC North team that has a record above .500.

The Philadelphia Eagles have -450 odds to win the NFC East. Philadelphia didn’t lose its first game until Week 10. Jalen Hurts has bounced back from last season’s brutal playoff loss to engineer a top-three scoring offense.

The Tennessee Titans, Tampa Bay Buccaneers and Baltimore Ravens are heavy favorites to maintain their division leads for the rest of the season. The San Francisco 49ers and Buffalo BIlls are odds-on division favorites, even though they aren’t in first place.

Let’s take a look at the 2022 NFL division odds and identify a best bet to win each division.

Here are the odds to win each NFL division in 2022, per BetMGM.

Buffalo was expected to cruise to a third straight first-place finish, but the AFC East has become the most competitive division in football. The Bills have fallen to third place in a division filled with playoff contenders. With the best quarterback and defense in the AFC East, Buffalo is still the odds-on favorite to win the division. The Dolphins are the biggest threat to the Bills because of their explosive offense and undefeated record when Tua Tagovailoa finishes a game. The Jets are +1200 long shots, even though they have a win over the Bills and sit above Buffalo in the standings.

The AFC North has turned into a two-team race. Cleveland has struggled to tread water during Deshaun Watson’s suspension. The Steelers are tied with the Browns at 3-6 and have a bottom-five offense. Joe Burrow and the Bengals have rebounded from a 0-2 start, playing more like the team that went to the Super Bowl. The Ravens have the edge with an easier schedule and a win over Cincinnati in Week 5, though they only have a one-game first-place lead.

The AFC South somehow manages to be the NFL’s weakest division just about every year, and it looks like the Titans are going to finish in first place for the third season in a row. Tennessee is the only team in the division that has a winning record. The Titans have only been defeated by playoff contenders. The Colts have made multiple quarterback changes and fired their head coach. The Jaguars have one win since Week 4. The Texans have one win all season.

What was supposed to be one of the best divisions in recent memory has failed to live up to the hype. Las Vegas entered Week 11 tied for a league-high seven losses. The Russell Wilson trade is looking like a disaster for the Broncos, which have more trouble scoring than anyone. The Chiefs have a win over the Chargers and one of the league’s most explosive offenses. Laying -1000 might not be the best bet, but Patrick Mahomes and Andy Reid seem to be well on their way to another AFC West title.

The Eagles have the best record in the NFL and have become the clear favorites to represent the NFC in the Super Bowl. Philadelphia could be favored for the rest of their regular-season games. The Cowboys’ defense has been one of the league’s best units, but a Week 6 loss in Philadelphia will make it difficult for Dallas to mount a comeback within the division. The Giants might actually be the biggest threat to the Eagles in the NFC East, considering what Brian Daboll has done as a rookie head coach. New York’s early success is more sustainable than its odds suggest.

The odds suggest that the Vikings have almost no chance to blow their NFC North lead. Minnesota took command of the division by defeating Green Bay 23-7 in the season opener and hasn’t looked back since. A Week 10 win in Buffalo might’ve all but clinched the division title for the Vikings, though all the value is gone at -5000. Aaron Rodgers’ bid for a third straight MVP award has been derailed by a lackluster receiving corps. Unless Green Bay’s offense figures things out soon, the Vikings are going to win their first NFC North title in five years.

Tampa Bay’s odds to win the Super Bowl may have gotten worse since Week 1, but the Buccaneers remain heavy favorites to win the division. The Panthers might be the worst team in NFC. The Saints are in last place and look nothing like contenders. The Falcons are a game behind the Buccaneers in Week 11. A two-game winning streak indicates that Tom Brady and the Bucs are turning things around, though the 45-year-old isn’t getting the help that he had in his first two seasons in Tampa Bay.

The NFC West has become a two-team race between the 49ers and Seahawks. The Rams can’t protect Matthew Stafford, and Cooper Kupp’s injury could be the final nail in the coffin for their Super Bowl defense. Arizona is 4-6 and still hasn’t beaten a good team. San Francisco is 3-0 in divisional games. The 49ers’ offensive weapons and defense make them the most complete team in the division. They still trail the Seahawks during Geno Smith’s renaissance season.

Never bet on an NFL division winner? FTNBets makes the process easy to understand. First, you must sign up for a sportsbook that operates within your state. Once that’s set up and you’ve deposited money into your account, take a look at the division odds in the NFL futures section.

Let’s use the AFC East as an example. The odds should look something like this:

For example, if you bet $190 on the Bills and Buffalo wins their division, you’ll earn a $100 profit. Your sportsbook account would be credited $290 total. A winning $100 divisional bet on the Bills results in a profit of $52.63.