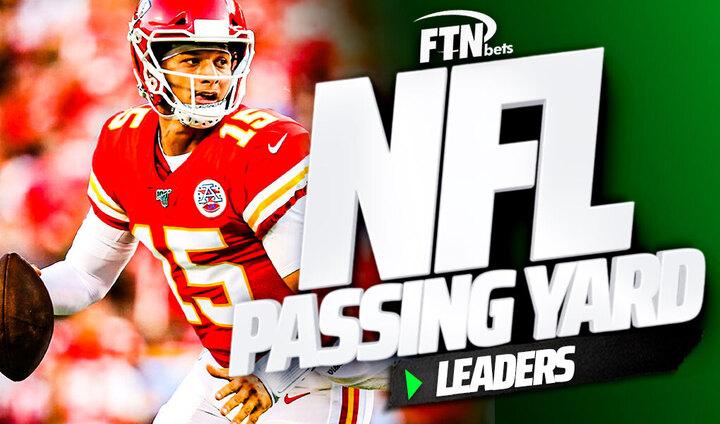 FTN's Tony Riccobono analyzes the best quarterback prop bets to make and which signal-callers have the best chance to lead the NFL in passing yards this season.

The quarterback who has thrown for the most yards since making his first career start is the odds-on favorite to win the prop bet for most passing yards in the regular season. Patrick Mahomes has the best odds to be the 2022 NFL passing yards leader.

Mahomes is the overwhelming betting favorite with -400 odds (80% implied probability) at DraftKings Sportsbook to have more passing yards than any other quarterback in the 2022 NFL season. The Kansas City Chiefs star leads the league with 3,808 passing yards and 30 passing touchdowns.

The quarterback who kept Mahomes from reaching the last Super Bowl is given the best chance to overtake him for the passing title. Joe Burrow ranks second with 3,446 yards and +700 odds. Burrow had 63 more yards than Mahomes in the Cincinnati Bengals’ Week 13 victory over Kansas City.

Josh Allen’s +1000 odds put him third in the race to be the passing leader. Allen was favored to win the prop bet for much of the season. With 3,406 passing yards in 12 games, Allen is one of three players who hasn’t missed a start and averages north of 280 yards per contest.

Justin Herbert was the preseason favorite to be the passing yards leader. The Los Angeles Chargers quarterback is four with +1200 odds. Tom Brady, the reigning passing leader, has +2000 odds to repeat the accomplishment.

Let’s take a look at the odds and the best bet for the 2022 NFL passing leader.

Who will be the 2022 NFL passing leader?

Why is Patrick Mahomes favored to have the most NFL passing yards in the 2022 season?

Mahomes is pulling away from the pack by putting together an incredibly prolific stretch of games. Prior to throwing for 223 yards in Week 13, Mahomes hit the 320-yard mark in six straight weeks, averaging 364.5 yards per game during that time. Maintaining that pace for a full 17-game season would result in a historic 6,196-yard campaign.

While Mahomes might be starting to slow down somewhat, there’s little reason to believe that he won’t keep putting up high passing totals. His 304.0 yards per game for his career are the most all time. The Chiefs have a top-three offense for the third straight year. A two-time runner-up for the passing title, Mahomes will likely finally get over the hump this season.

With all of the value gone from Mahomes as a heavy odds-on favorite, taking a chance on a long shot is probably the best bet. There isn’t much separation among the second tier of contenders. Burrow, Allen, Herbert and Brady are all within 114 yards of one another. Brady has the longest odds in the group, making him the best choice.

Brady is still attempting more passes than any other quarterback, which he did in his first two seasons with Tampa Bay. The 45-year-old has 3,332 passing yards and 10 straight games with at least 243 yards through the air. Maybe Brady can turn back the clock down the stretch as the Bucs try to lock up the NFC South title.

If you’ve never bet on the NFL passing leader and don’t know where to start, FTNBets has you covered. First, bettors must create an account with a sportsbook that operates in their state. Once you’ve deposited money, you can place a wager on this season-long quarterback prop.

When you go to the player futures section of a sportsbook, the odds should look something like this:

The numbers next to each player represent the odds and the payout for a winning $100 bet. The player with the lowest number is the favorite. In this case, it’s Patrick Mahomes.

If you bet $400 on Mahomes for the most regular season passing yards and he finishes first in the NFL, your account would be credited $500, including a $100 profit and the $400 you originally wagered.