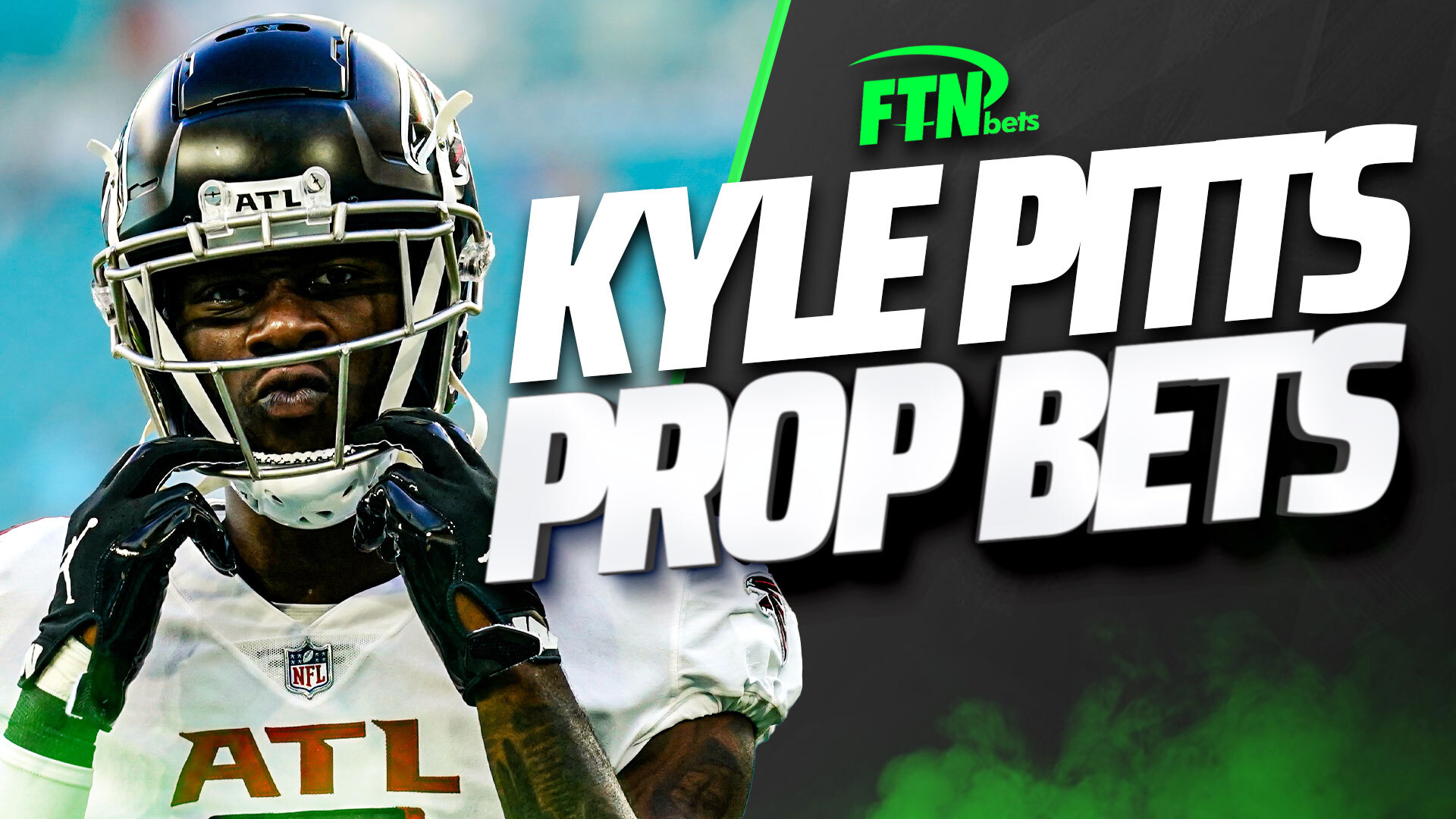 FTN's Nick Makowitz breaks down some of the key prop bets for the Falcons' star tight end in the 2022 NFL season.

In 2021, Kyle Pitts became just the second rookie tight end ever to amass 1,000 receiving yards. He benefitted from having a veteran signal-caller in Matt Ryan in year one, but he’ll look to build chemistry with Marcus Mariota in year two.

Pitts’ downfall as a rookie was his single receiving touchdown. Heading into 2022, his touchdown total is set at 4.5 while his receiving yardage prop is sitting at 900.5, a solid dip from where he finished last season.

This time around, he’ll have rookie first-rounder Drake London alongside him on the outside, and he won’t have to worry about competing for targets with Russell Gage (signed with Tampa Bay) or Calvin Ridley (suspended).

So, will Pitts establish himself as a true alpha, take a leap forward and cruise past his receiving props? Or will the perceived downgrade at quarterback halt any chance for the young phenom to level up in year two? Let’s take a deeper look at some Kyle Pitts receiving props.

(All odds via DraftKings Sportsbook)

How Many Receiving Yards will Kyle Pitts Have in 2022?

After accumulating 1,026 receiving yards in 17 games last year, Kyle Pitts’ total heading into 2022 sits at 900.5. That projected decrease can likely be attributed mostly to his new quarterback, Marcus Mariota, who’s probably a step down from Matt Ryan, even if the former MVP has a noodle arm at 37.

So, is it possible for Pitts to maintain or improve his stats with a downgraded quarterback? Yes, it is. Rookies tend to experience a learning curve early on. The Falcons’ week six bye is a great separation point for us to evaluate Pitts’ development during his first season.

Prior to the Falcons’ bye week, Pitts’ counting stats actually looked better than they did during the last two-thirds of the season. His biggest game – week five against the Jets – came without Calvin Ridley in the lineup, when he went for 9-119-1 in his first career game as the go-to guy.

After the bye, his production was sporadic, but a lot of underlying metrics provided reason for optimism. Pitts saw increases in target share (+3%), aDOT (+2.6 yards), YAC per reception (+2.5 yards) and his share of the team’s air yards (+7%).

The Falcons had no solution for Ridley’s unplanned absence, and defenses had almost nobody else to worry about, hence the inconsistent production. Drafting Drake London and acquiring Bryan Edwards – who led all receivers with 50-plus targets in explosive play rate – should open things up for Pitts. And while the overall passing volume may be questionable, Pitts is the No. 1 option for a quarterback who loves tight ends.

During Mariota’s time in Tennessee, Delanie Walker made three consecutive Pro Bowls and topped 1,000 yards in 15 games in 2015. From 2015 to 2017, Mariota targeted the tight end position 28% of the time compared to 26% for his career, according to PFF. Matt Ryan targets tight ends at a 17% rate for his career, but that skyrocketed to 27% last season. The Pitts effect. He demands targets and Mariota will happily oblige, as he’s done in the past with lesser talent.

How Many Touchdown Receptions Will Kyle Pitts Have in 2022?

Kyle Pitts’ low total of one touchdown was quite shocking considering the general success he had as a rookie. At 6-foot-6 and 246 pounds, Pitts projects as a great red zone and end zone threat. Last season, though, he was the only tight end to see 15+ red zone targets and not haul in multiple touchdowns.

Our own Tyler Loechner pointed out that Pitts is a great positive touchdown regression candidate for 2022, considering he should have scored about five touchdowns based on Jeff Ratcliffe’s Expected Fantasy Points tool.

Positive touchdown regression typically happens for players who scored an abnormally low amount of touchdowns relative to their overall production. Plus, it helps to have a general knack for the end zone. Pitts was only a rookie, so his knack for the end zone is unclear, but he did score 12 times on 71 targets in his final season at Florida. And did I mention he’s absolutely massive?

I’m comfortable betting that Pitts’ talent wins out and opposing defenses can’t keep this athletic freak out of the end zone more than a handful of times.

How to Bet Kyle Pitts Props

If you are looking to bet on props like receptions, receiving yards and receiving touchdowns, FTNBets has all the tools to get you started. Sign up for a sportsbook account using our affiliate link and take a deep dive into all the different NFL futures markets that legal books offer.

Check out the FTN Bets Parlay Calculator to view parlay payouts based on each leg’s odds and the amount of money wagered.