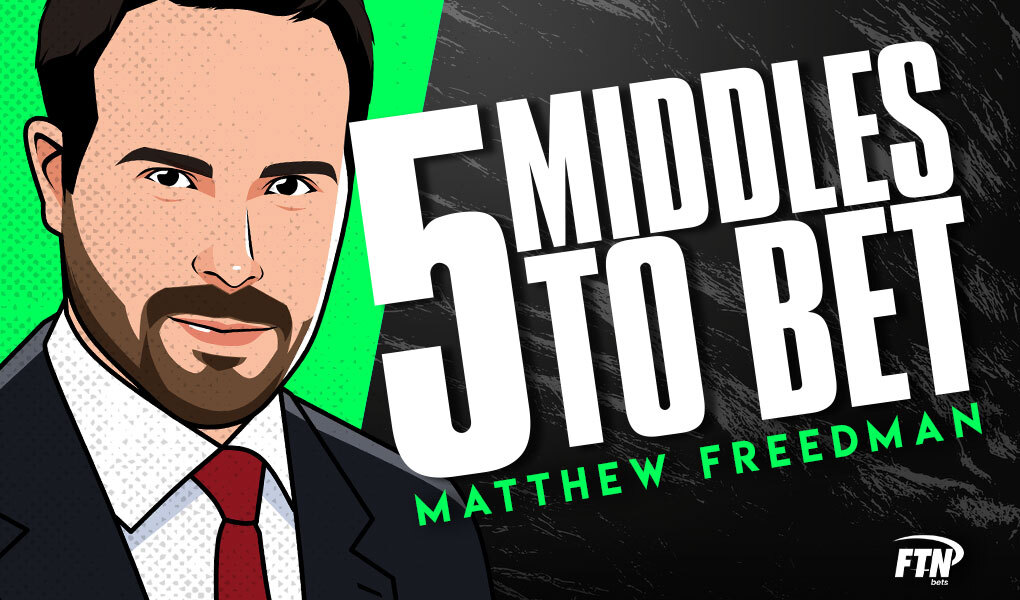 FTN's Matthew Freedman details a few middles is betting on for the 2021 NFL season.

Middling is one of my favorite things to do. It’s also descriptive of who I am as a person, so win-win.

To “middle” a bet is to take a position on both sides of a line -- but at two different numbers, often at two different sportsbooks simultaneously -- in an attempt to win two wagers at once by landing on a number in the middle.

For instance, last month Eliot Crist highlighted some middle opportunities, one of which was for Josh Allen’s 2021 passing yardage. At FOX Bet, Allen’s prop was 4,130.5 yards. At DraftKings, it was 4,600.5.

That’s a massive middle of 470 yards, so Eliot bet under 4,600.5 at DraftKings and over 4,130.5 at FOX Bet -- and if Allen’s season total falls between those two numbers then Eliot will win both bets.

For NFL season-long player props, I have a few general middling guidelines. For passing yardage, I look for a gap of at least 250 yards (ideally at least 300, although, sometimes, I’ll make exceptions because I’m a degenerate). For scrimmage yardage (rushing, receiving, or the two combined), I want a discrepancy of at least 100 yards. And for odds, I tend not to bet beyond the standard -110 on both sides.

When does it make sense to bet a middle? If you’re betting 1.1 units at -110 odds, you have two possible outcomes: Win two units if the middle hits or lose 0.1 units if it doesn’t hit. That means that even if you lose your first 20 middle attempts, you can still break even if you middle on the 21st try.

So if you think you have better than a 5% chance to hit the middle (4.76% chance to be precise), then it makes sense to bet it.

In this piece are five of my favorite middle opportunities in the market right now with brief notes.

Use our Prop Shop Tool to search for more bettable middles, and check out the FTN Bet Tracker to see all the other bets I’ve already made for the upcoming NFL season.

Over the past two seasons, Lamar Jackson has averaged 199.7 yards passing per game (including playoffs).

This middle is well within Jackson’s realistic wheelhouse, and in our official FTN 2021 NFL player projections,  we have him projected for 3,376 yards passing.

One of my bold calls for 2021 is that Russell Wilson will be the No. 1 fantasy quarterback, so maybe I’m selling him short by capping his ceiling with the BetMGM position.

But that’s a bold call -- a ceiling outcome. His median projection of course is more modest, and what’s likeliest for this season is that Wilson will do something similar to what he’s done over the past two years, since wide receiver D.K. Metcalf joined the team.

This is a very attainable middle for Wilson.

It’s a 350-yard middle. That on its own is almost enough. That this is well within the range of what Tom Brady could do is just a bonus.

This is one of the most delicious rushing yardage middles I’ve ever seen, and longtime Freedman readers know I don’t use the word “delicious” lightly.

To have a realistic chance of hitting the middle with Mixon playing 14-16 games is outstanding.

The Titans are likely to have a ground-based offense built around running back Derrick Henry, but they will be without wide receiver Corey Davis and tight end Jonnu Smith this year, so Julio Jones should still see plenty of targets.

Now 32 years old, Jones will start to slow down one of these seasons -- but last year, he averaged 11.3 yards per target, and over the past half-decade, he has been one of the top receivers in the league with his 10.1 yards per target (including postseason) mark.

With his projectable opportunity and efficiency, Jones has a good chance to hit the 1,000-yard mark, but the run-heavy nature of the Titans offense could cap his target upside and limit his yardage potential.