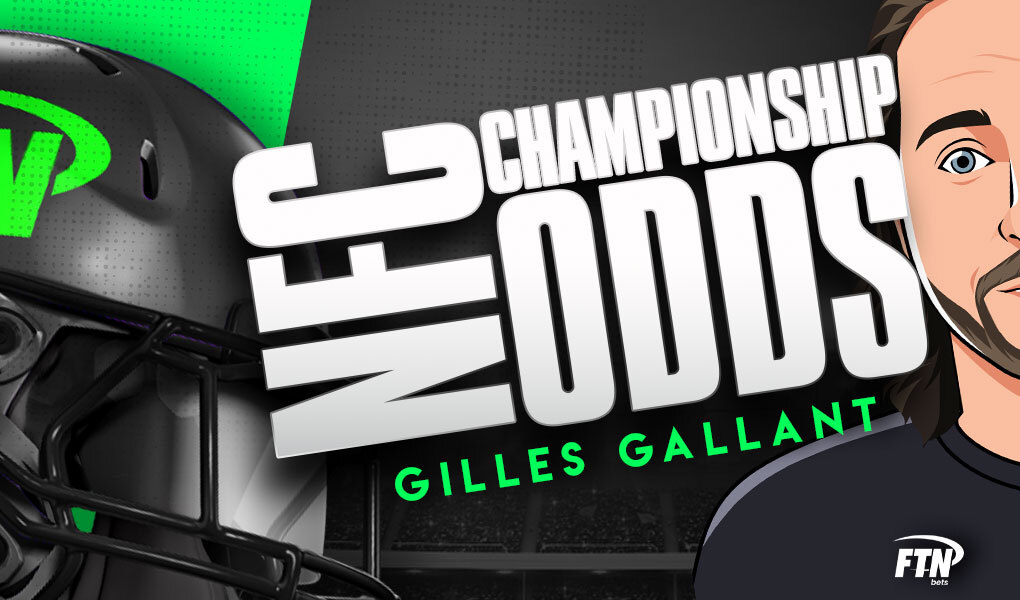 Looking for the latest NFC Championship odds? FTNBets’ NFL expert breaks down the betting odds for which team will win the NFC to play in Super Bowl 56.

The landscape of top competition in the NFL seems to change annually, but when looking at NFC Championship odds for 2021, it’s more of the same, with the Tampa Bay Buccaneers favored to win the NFC and go to Super Bowl 56.

According to the latest odds from BetMGM, the Buccaneers are +300 to run the table in the NFC and play in the Super Bowl for the second straight year. The Bucs returned nearly every starter from their championship team and still have quarterback Tom Brady running the show which makes them very attractive for bettors considering odds to win the NFC Championship.

The second team on the oddsboard is the Los Angeles Rams, who seem to be re-tooling each year for a Super Bowl run. The Rams swapped quarterbacks with the Detroit Lions and now have Matthew Stafford leading the offense with a stellar defense. The Rams are +550 for NFC Championship odds to make it to the Super Bowl again.

The next two teams on the list are the Green Bay Packers and San Francisco 49ers, each at +650 for odds to win he NFC Championship. The Packers have played in the NFC Championship in the last two seasons but couldn't get over the hump. With players like QB Aaron Rodgers signalling this could be his “The Last Dance” in Green Bay, the Pack are going all in on 2021.

As for the 49ers, oddsmakers are banking on a return to prominence for Kyle Shanahan’s squad with some key starters returning from injury and a potential secret weapon of quarterback Trey Lance. The third-overall pick has been turning heads in practice and could be the key to getting the Niners back to the Super Bowl.

Let’s break down why the Buccaneers should be favorites for NFC Championship odds and if there’s a dark horse NFC squad that could potentially make some noise in the playoffs and get to the Super Bowl:

Who will win the NFC Championship?

Here are the odds each team has of taking down the NFC, per BetMGM.

Why are the Tampa Bay Buccaneers favored for NFC Championship odds?

Repeating as Super Bowl champions — or even making it back to the Super Bowl in successive seasons — has proved difficult for teams when you look over the history of the NFL (pipe down, Patriots fans). Typically, a team is gutted or at least picked apart financially as crucial players tend to sign with other teams to cash in on recent success. Well, don’t tell that to the Tampa Bay Buccaneers, who are returning every starter from their Super Bowl championship squad and are betting favorites for NFC Championship odds.

Continuity is key for the Bucs if they want to win the NFC, and having another year together with quarterback Tom Brady could make them even scarier. Tampa Bay’s defense was tops in the NFL in rush yards and rushing touchdowns allowed but struggled in pass protection, ranking in the bottom 10 in both passing yards and touchdowns allowed. Teams knew they couldn’t run on a defensive line that has Ndamukong Suh and Vita Vea, so the only way to beat them was throwing the football.

The defense will likely do their job but when you look at the offense, it’s almost like a video game. Brady will get another offseason to work out the timing with receivers like Mike Evans, Chris Godwin and Antonio Brown and still has safety blanket Rob Gronkowski, who scored two touchdowns in Super Bowl 55. There is virtually no weakness to this team other than people banking on Brady to finally fall off a cliff at the age of 44.

Given how the Saints took a step back with Drew Brees retiring, the Bucs should handily win the NFC South and will likely get the top seed in the NFC. This should put them in the driver seat for NFC Championship odds and at +300, this will likely be the best value you can get all year unless someone like Brady goes down to injury.

Once you’re done letting out a hearty laugh at my “donation” to my sportsbook, hear me out on why the Bears are worth considering for NFC Championship odds. Much like the Bucs, the Bears defense is championship-worthy, as it ranked second in rushing touchdowns allowed and was top 10 in the NFL in passing yards allowed. So, why are they listed at +3000 to win the NFC? Well, when you share a division with the Green Bay Packers and potentially have a quarterback controversy brewing, it’s difficult to take you seriously as a contender for odds to win the NFC Championship.

Let’s be up front: this pick completely hinges on if the Bears make the smart move and allow rookie QB Justin Fields to start over free agent signing Andy Dalton. While it’s likely Dalton can still handle head coach Matt Nagy’s offense, the fact remains that his ceiling is limited for production based on the former Bengals/Cowboys’ QB arm strength and accuracy. Dalton is a great placeholder if your starter goes down and you need a quarterback to finish the game, not to lead your team to the Super Bowl.

This is why I think Fields has to be the Bears starter for this wager to work and according to the latest reports from Chicago training camp and what we've seen in preseason, he’s been lighting it up in practice when given a chance. Coming into the 2020 NCAA college football season, Fields was considered the second-best QB prospect behind Trevor Lawrence and even though he led the Buckeyes to the 2021 College Football Playoff and the championship game, he was still downgraded by teams in the NFL Draft due to throwing mechanics and whether he can read NFL defenses.

The latter I kind of disagree with, because Fields was playing in the Big 10 and faced Clemson in back-to-back years for the CFP. On top of practicing against his own vaunted defense, if Fields can succeed under those circumstances when both teams have NFL-ready players, it’s hard to come to that same conclusion.

With Fields’ scrambling ability and having decent receiver weapons at his disposal, he needs to start sooner rather than later. If Nagy makes the right call and inserts Fields as a starter, I expect the +3000 odds to drop significantly. Outside of the Bears, no other team in the conference offers the upside and value for odds to win the NFC Championship.