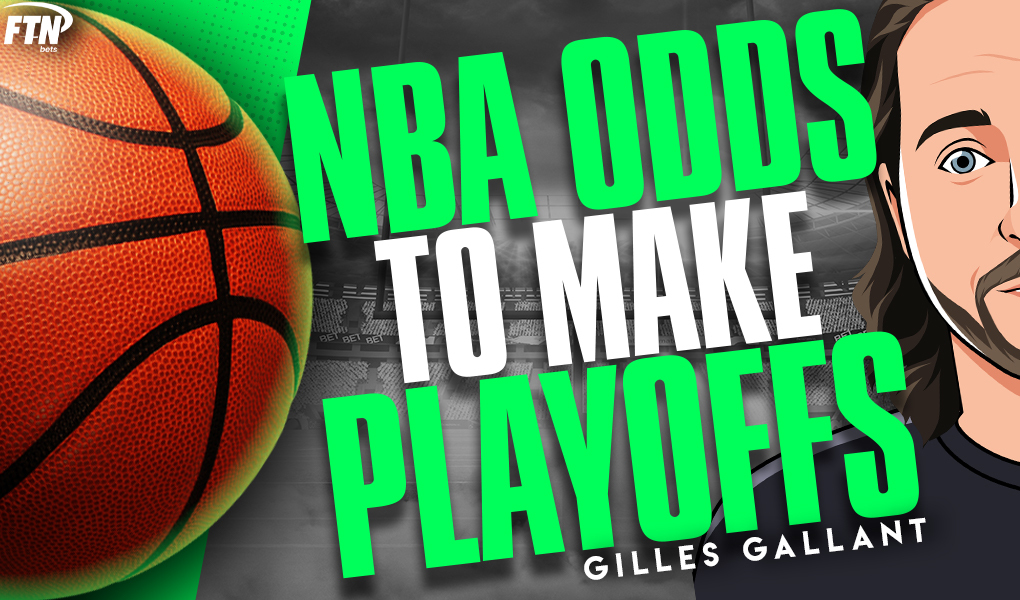 FTN's Gilles Gallant runs through the various teams' odds to make the NBA playoffs in the 2021-22 season and picks out some of his favorite bets.

Thirty teams each year compete for a chance to win the NBA Championship. In order to make it to the mountaintop, you need to make the playoffs first, and the Brooklyn Nets are the likeliest team to get to the 2022 postseason according to the latest NBA playoff odds.

Sportsbooks like DraftKings have already released betting odds for which teams will make the NBA playoffs, and the Nets sit at -20000, which has an implied probability of 99.5%. The Nets were the 2-seed in the Eastern Conference last season at 48-24 and have arguably the best collection of high-end talent in basketball. If you think everything goes wrong in Brooklyn, you can always fade them to miss the postseason at +4000.

In the Western Conference, the Utah Jazz have the lowest NBA playoff odds at -5000, which carries a 98% implied probability. The Jazz had the best record in the league last year and have made the playoffs in five consecutive seasons. The Los Angeles Lakers and Phoenix Suns aren’t far behind — each are at -3500 for odds to make the NBA postseason.

Each team’s odds to make or miss the playoffs along with last year’s regular-season record are listed below with odds courtesy of DraftKings. There are also some betting picks for two teams that could be worth investing in to either exceed expectations and go to the postseason or tumble in the standings and out of contention.

One that bettors will need to consider when betting these props is the conference play-in tournaments for teams with the seventh- through 10th-highest winning percentages in each conference. This means a team that is 10th in the standings can still play its way into the No. 8 seed and cash your bet. On the flip side, that also means if you bet on a team that sits in eighth place in the conference and it goes on to lose in the play-in tournament, that team will miss the playoffs.

A recent example is when we saw the Indiana Pacers as the 2021 season concluded as they were gunning for the 8-seed in the East but lost to the Washington Wizards for the last play-in spot.

For the casual NBA fan, the lack of parity can be an issue when seeing the majority of teams that made the playoffs the year prior go on to steamroll in the following regular season. However, there’s still some plus-money value on certain teams to break off the shackles of mediocrity and get to the NBA postseason or where a team that is overvalued, you have to bank on them falling on their face.

Here is one NBA team that I think we can bank on to make the playoffs entering the 2021-2022 season:

A team that is on the cusp with a roster full of talent, this is great value for the Pelicans to make the playoffs. While the Pellies went out with a whimper this past season, they just missed the play-in tournament by two games and finished the season at 31-41. With former head coach Stan Van Gundy’s antiquated principles being shown the door, new head coach Willie Green should bring in a new mentality for this group.

Zion Williamson is the true difference-maker for this prop. The third-year bull-in-a-china-shop forward has shown in his brief time in the NBA that he’s a matchup nightmare and finished last season averaging 27.7 points per game while shooting over 60% in the paint. He and Brandon Ingram are an interesting scoring duo because there are only a handful of defenders that could truly stop either of them.

The additions of Devonte' Graham and Jonas Valanciunius should actually stabilize a starting lineup that had trouble determining the best five guys last year. If they can even get marginal improvement defensively after ranking 24th in the NBA in scoring defense last year, I fully expect them to sneak in the playoffs even if they have to go through the play-in tournament to do it.

Trying to pick a team to not make the NBA playoffs after making it in 2021 has “going to the dentist” vibes. It happens every year, but it doesn’t make it any easier a choice. That’s why I’m sure there will be bettors thinking I’m crazy when they see who I’ve decided to fade this season:

It pains me to write this as I’m a huge fan of Damian Lillard and the Blazers, but I think they could be in trouble in the Western Conference. That’s not to say they won’t still be in the mix for the final playoff spots in the West, but when you look at the teams that finished ahead of them in the standings and the teams that trailed them, they look to be the odd team out, especially when you see that they made no offseason moves to improve.

Based on NBA playoff odds, the Jazz, Suns, Lakers, Clippers, Nuggets, Warriors and Mavericks seem to be the consensus teams to finish with the top seven spots in the West, with the Clippers having the highest odds at -285. By that logic, if there’s only one spot left, that leaves very little margin for error for the Blazers, who wouldn’t be considered a better team than those seven listed.

Then when you consider all the offseason drama from Damian Lillard potentially wanting out of Portland, we could be witnessing the Blazers contender window closing. It wouldn’t shock me to see the Blazers make a Lillard deal by the trade deadline to try and recoup as many assets as possible if Portland is on the outside looking in for playoff seeding. Since I just wrote about how I think the Pelicans make the playoffs this year, I think it's the Blazers that drop out and at +200, it’s great value to get on this prop now.