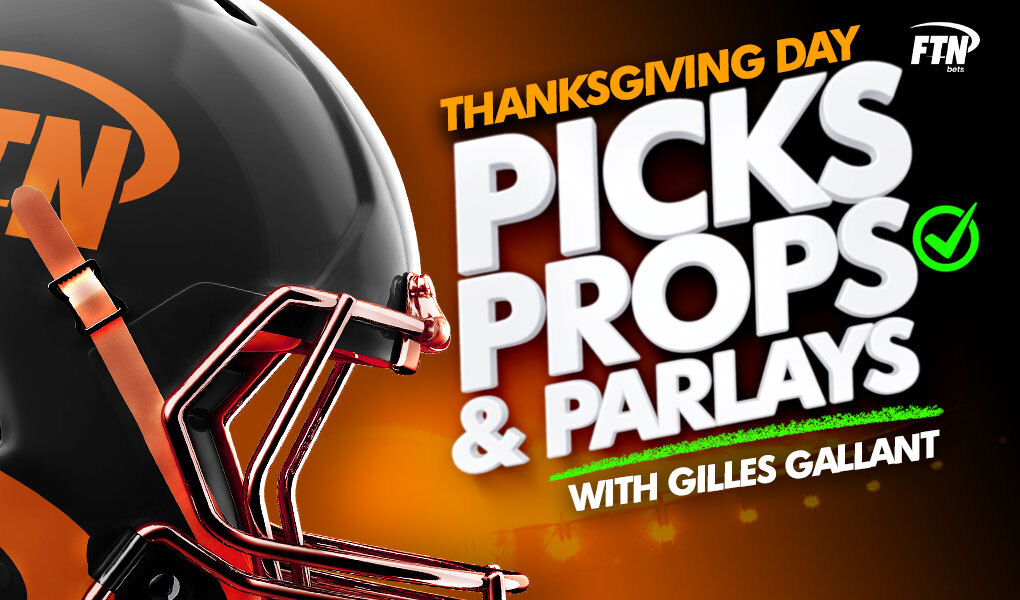 Best NFL Props and Parlays for the Week 12 Thanksgiving Slate

FTN's Gilles Gallant picks out his favorite props and parlays to bet on for the Thanksgiving NFL slate in Week 12.

It’s the yearly tradition of gathering with your families, having awkward conversations, stuffing your face with turkey and betting on NFL games. Yes, it’s Thanksgiving, which means there are three NFL games on the slate for bettors, and FTNBets has got you covered with the best O/U player props for each game.

Last year for the Thanksgiving slate, the NFL only had two games because of COVID-19, but for 2021, we’re back to three courses of football Thursday to kick off Week 12.

For reference, here are the three NFL games being played on Thanksgiving and the latest NFL odds for spreads and totals:

If you’re familiar with my weekly NFL O/U player props article that I do each Friday or Saturday, my Thanksgiving picks will follow a similar format. I’ll find the best betting prop for each game and lean toward the plus-money option, if it’s available. This strategy has been pretty successful for me in 2021 and my record shows through 11 weeks.

After 11 weeks and 33 total picks, my weekly record for O/U player props is 21-12 for +9.1 units of profit. If you had blindly tailed my article, you’d be profitable in eight of 11 weeks. Not too shabby! Did I just set unrealistic expectations? Maybe, but that’s the life you lead when you decide to bet on the NFL and Thanksgiving games.

Without further ado, here are my three favorite NFL player prop plays. These bets can also be found with the NFL Bet Tracker. All bettors should also make sure to shop around and get the best lines by using the FTNBets Prop Shop.

Here we go for Thanksgiving NFL bets. If you want to tail or fade these bets, sign-up with DraftKings Sprotsbook.

Andy Dalton to Throw an Interception

The Red Rocket may not have gotten the best deal as quarterback of the Chicago Bears, but the fact remains that as a QB, for any team, he turns the ball over a lot. Andy Dalton has 127 interceptions in 148 career games and isn’t the most reliable quarterback to keep possession. Last season with the Cowboys, he had eight interceptions in 11 games, with multiple picks in only one. Dalton is the only quarterback of the group to have played last season on Thanksgiving, and it shouldn’t be looked at as a coincidence that he threw an interception vs. Washington. The Cowboys lost that game as 2.5-point home favorites and Dalton was thought to be a serviceable backup when Dak Prescott was lost for the season.

Obviously, this betting prop comes down to the Lions, who have been feisty defensively despite not having a win this season. The Lions have forced seven interceptions this season and three of those were at home. Joe Burrow, Lamar Jackson and Jalen Hurts were the turnover victims and I think we can all agree those three QBs are far superior as passers than Dalton. This prop should be -130, not +110, so I’m taking this bet every time if you giving me a below-average QB in a road game.

You would think, with how much love Dallas Cowboys running back Tony Pollard gets from the fantasy and betting community, that he’d be a top-10 back in the game. Instead, he toils away behind incumbent starter Ezekiel Elliott and just shows flashes of brilliance in the limited role he has with Dallas. That said, I still think there's an opportunity on Thanksgiving for both Pollard and Elliott to eat against the Raiders, which is why I love the OVER on this longest rush prop at 12.5.

As a Cowboys fan, I have no issue admitting Pollard is more explosive than Elliott when handed the football. Over the last four games, Elliott hasn’t had a rush longer than 11 yards and has only found the end zone twice. Meanwhile, in that same span, Pollard has rushes of 31 yards and 15 yards in two separate games while also having a third game with an 11-yard rush. When given the chance, Pollard can explode for a first down and he may get more attempts this week with Elliott nursing a sore knee from this past Sunday.

Another reason why I like this bet is the Raiders’ run defense is falling apart. Over their last four games, Las Vegas has allowed running backs to have eight carries of 20 yards or more and 12 carries of 10 yards or more. It shouldn’t be a shock to see the Raiders 1-3 in those outings and the Cowboys will likely try to exploit that weakness.

I’m likely the president of the Dawson Knox fan club, so this pick might has some bias but I think we see another week of heavy workload for the Buffalo Bills tight end. Knox has been a revelation in this Bills offense that features a lot of talent at wide receiver. In Week 11 vs. the Colts, Knox led all players with 10 targets and six catches and has four games this season with four catches or more.

Facing this Saints defense, it won’t be an easy prop to cash. The Saints have only allowed 48 catches on 79 targets and only one receiving touchdown to tight ends this season. However, New Orleans did just allow Eagles Dallas Goedert to get five catches last week and also allowed Geoff Swaim with the Titans to get four catches. I think this is a reasonable line and I fully expect Knox to get at least four catches vs. the Saints on Thanksgiving.

I don’t normally bet on parlays, as they’re usually a fast way to bleed your bankroll, but there were two picks for Thanksgiving that I didn’t want to bet on individually and each was a total. That’s why I’m going to parlay the UNDER 41.5 points in Bears-Lions and the OVER 45 in Bills Saints. The parlay comes out to +265 on DraftKings.

Let’s start with Bears/Lions, where I don’t see much offense likely to be generated in this matchup. The Lions and Bears are in the bottom three in points scored per game, and each averages under 17 points through 11 weeks. It really doesn’t matter if QB Jared Goff plays or Tim Boyle is under center. This offense will likely find it difficult to generate more than 17 points. As for the Bears, the offense has been a mess all season — the most points they’ve scored in a game all season was 24 vs. the Lions in Week 4. Worth noting the Lions were held to 14 points and the final combined score was 38.

Moving over to Bills/Saints, this total feels like an overreaction from Buffalo’s recent play. The Bills are still the second highest-scoring team in the NFL at 29.5 points per game while also ranking fourth in passing yards. The Colts just presented a bad matchup and there was no way for the Bills to stop the bleeding. There’s also this weird notion that the Saints offense is stuck in mud with Trevor Siemian at quarterback and they couldn’t be further from the truth. In four games with Siemian at QB, the Saints have put up point totals of 36, 25, 21 and 29. He’s also thrown for eight touchdowns in those games while rushing for another. I’m not brave enough to pick a side in this matchup, but I feel pretty confident of predicting a lot of points will be scored in the Thanksgiving nightcap.