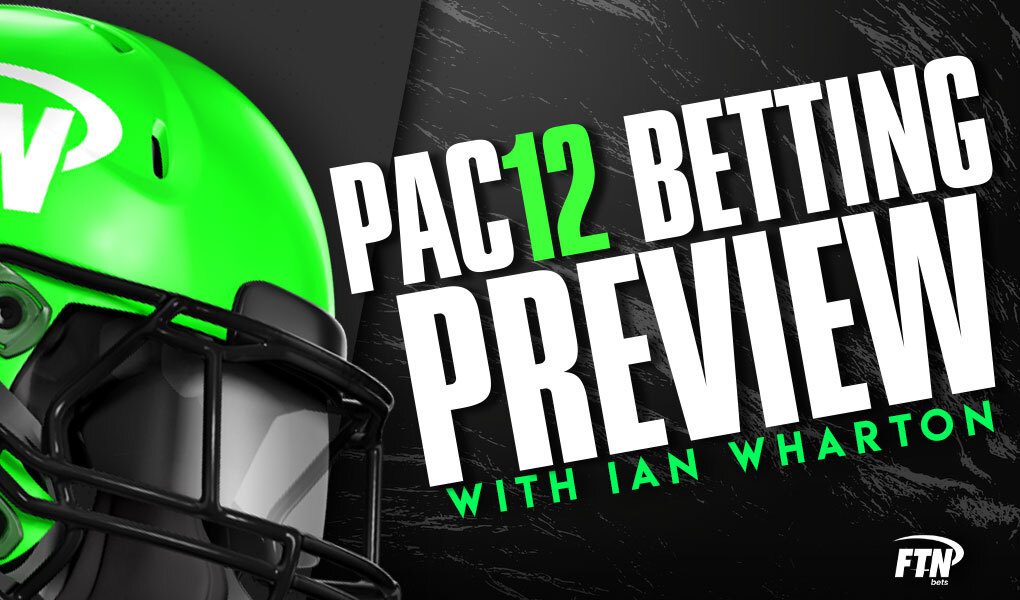 FTN's Ian Wharton runs through his Pac-12 betting preview as we head toward the start of the 2021 college football season.

Of all the major conferences, the Pac-12 is the most unpredictable conference to predict. The coaching turnover over the last decade has made it impossible for any one program to dominate the standings. While the parity of having four different conference winners in the last six years is great for the Pac-12's depth, the effects on recruiting have been severe.

One issue for the Pac-12 has been losing the iconic coaches who defined their program for years on end. Chip Kelly's departure to the NFL is just now being forgotten thanks to Mario Cristobal's success. But Washington, Washington State and USC have yet to find their next generational coach to fill the shoes of Chris Petersen, Mike Leach and Pete Carroll, respectively.

Meanwhile, Kelly has met mediocre results at UCLA since his return to the collegiate ranks and the second tier of Pac-12 contenders has been a revolving door. Stanford is consistently average under David Shaw, and Utah has been the most consistent anchor the conference can muster outside of Oregon. 2021 must be the year the conference takes a sizable leap forward.

The good news is there's serious star potential across the Pac-12. Some quality teams will barely make bowl games, and the conference should fare well in the postseason even if there's not an obvious title contender. Both the Pac-12 North and Pac-12 South will have close calls in their divisional races.

We're previewing each conference's best betting picks prior to the season kicking off in less than one-month. The Pac-12 has one potential National Championship contender, Heisman Trophy candidates, and numerous juicy win totals we'll bet on from DraftKings. The conference is also deep with key players to watch, and we'll make several bold predictions for the Pac-12.

Here are some of my favorite picks for the Pac-12 conference in the 2021 college football season.

No one can confuse any of the Pac-12 teams as a National Championship favorite based on their odds. Both USC and Oregon have +4000 return for their title odds, per DraftKings Sportsbook, and neither is particularly enticing. The pathway for both teams is simply that difficult to imagine.

The Trojans are benefitting from the blueblood pedigree much like Texas has with these odds. USC has been up-and-down during the Clay Helton era, and the coach has somehow survived several offseasons where most athletic directors would have fired him if given the chance. The program is all-in on the sixth-year head coach.

His 45-23 record has been marred by embarrassing losses to woefully underpowered foes. His third division title in 2020 was a nice accomplishment but the expectation is for USC to be a power. After all, lesser programs in worse parts of the country are performing at a much higher level each year.

Quarterback Kedon Slovis is the big draw on offense. The classic dropback passer has impressive raw numbers and he's an accurate thrower from the pocket. But, he's not an aggressive or especially effective downfield passer and his creation ability is limited.

His surrounding cast is good but young. Receivers Bru McCoy, Michael Jackson, Jake Smith and Drake London are talented. They must step up and one must transcend into a star-level contributor each week.

Only 69% of the team's 2020 production is back from last year. That means we're trusting Helton much more than I'm comfortable with betting on USC to win the National Championship. No thanks.

Oregon is the only other Pac-12 team under the +8000 mark. There's certainly a better argument for the back-to-back conference winner even as they're replacing the quarterback for the third straight season. Their quest begins in Columbus to face a loaded but young Ohio State team.

The Ducks may not leave the Horseshoe with a win based on their own offensive limitations. Their experience will benefit them even if overall explosiveness is a concern. A whopping 86% of their production is back, and the majority is on their offense.

Their experienced backfield must be a strength for new offensive coordinator Joe Moorhead. Running back C.J. Verdell is the star of the unit after racking up 2,523 yards and 21 scores on the ground on 464 touches, and an additional 536 receiving yards on 50 catches through three seasons. He's a human-highlight reel with his speed and balance.

Graduate transfer Anthony Brown replaces Tyler Shough despite Brown's resume being quite weak from his Boston College days. He's a thick-bodied passer with a decent arm but lacking great accuracy and touch. To put it bluntly: the Ducks can't win big unless Brown takes a big leap forward and becomes an actual asset.

The rest of the roster is impressive. All five offensive line starters are back, the receivers are good enough for Moorhead to create production for, and the defense is getting seven starters back. They also have the best defensive player in the nation in Kayvon Thibodeaux, and star linebackers Justin Flowe and Noah Sewell.

Washington (+8000) and Utah (+10000) are also experienced teams but they simply lack the playmaking upside to reach the College Football Playoff. Winning over voters is hard, and there's no margin for error for the Pac-12 winner to operate within the current set up. I'm optimistic these teams can outperform their win total lines, though.

If you want to bet on a Pac-12 Heisman Trophy candidate, you only have three quarterback options who have been given a decent chance by oddsmakers. While a longshot pays off much better than a favorite, we also have to be realistic about the history of the conference and their inability to produce Heisman Trophy winners. It's tough when the majority of games are played so late at night.

USC Trojans passer Kedon Slovis leads the Pac-12 at +2800 odds. Slovis has the most realistic pathway thanks to the platform the program provides, his own pedigree as the quarterback at USC and the surrounding talent around him. People tune into USC games more than any other Pac-12 team, and this can sway voters if the Trojans turn things around and become a 10-win team.

We can't underestimate just how well Slovis has to play in order to become the eighth Heisman Trophy winner in school history. Five of the seven passers with higher odds than he has to win are dual-threat passers. The other two, J.T. Daniels and Sam Howell, either play for a better team (Georgia) or is a more polished passer than Slovis (Howell).

That leads to the other options. Both Jayden Daniels of Arizona State (+3500) and Dorian Thompson-Robinson of UCLA (+6000) are longshots but bring a level of excitement that can win over voters even if their team is relatively average. Seeing either program hit nine wins while their star quarterback post efficient numbers with exciting highlights can be the recipe for a big upset for the Heisman Trophy.

Daniels, a former elite prospect who has posted good numbers that show smart decision-making, must lead a program with very limited playmakers around him. The program is also shrouded in controversy thanks to recruiting allegations regarding head coach Herm Edwards. Daniels must become a much more explosive player despite there being so much responsibility on his shoulders each week.

Thompson-Robinson finally showed plus-starter ability in his five games last year. Chip Kelly's prized dual-threat passer was dramatically more efficient across the board. Another jump in performance would make the Bruins a sleeper for the Pac-12 and put Thompson-Robinson firmly into the Heisman race.

He completed 65% of his passes for 1,120 yards, 12 scores and four interceptions. His average per attempt jumped to 8.1, highlighting how he's more comfortable throwing downfield. He also added another 306 yards and three scores on the ground on a 5.6-yard average.

Thompson-Robinson is the longshot to play. Some will advocate for Washington's Dylan Morris at +10000, but I'm not so sure he'll even keep Sam Huard off the field for long. The protege has a better arm and more natural talent than Morris, who was relatively inefficient even given the circumstances COVID-19 brought.

Players to watch in the Pac-12

As much as the Big 12 specializes in offensive talent, the Pac-12 is chock full of defensive playmakers. On top of possible No. 1 pick in the 2022 NFL Draft Kayvon Thibodeaux and elite Oregon cornerback Mykeal Wright, USC has its own star pass-rusher in Drake Jackson. Jackson is a feared physical freak thanks to his ability to get into the backfield and finish plays.

Washington safety Trent McDuffie is continuing the Huskies' elite run of secondary stars. The hard-hitter has the ability to make plays in the run game and passing game thanks to his ball-hawking skill. Huskies tight end Cade Otton is also a must-watch player for the program on top of linebacker Edefuan Ulofoshio, McDuffie and Sam Huard.

Utah linebacker Devin Lloyd and all-purpose offensive weapon Britain Covey will keep the Utes entertaining and on top of their game. The Utes don't have a true offensive star, and there's not an NFL-level pass-rusher on the roster right now, so these two leaders must set the example with consistency and impact plays.

Colorado running back Jarek Broussard and Washington State rusher Max Borghi are tremendous talents. Both are great rushers despite being undersized and are impactful receivers out of the backfield. Their respective offenses will rely heavily on each to stay competitive weekly in a deep Pac-12 conference.