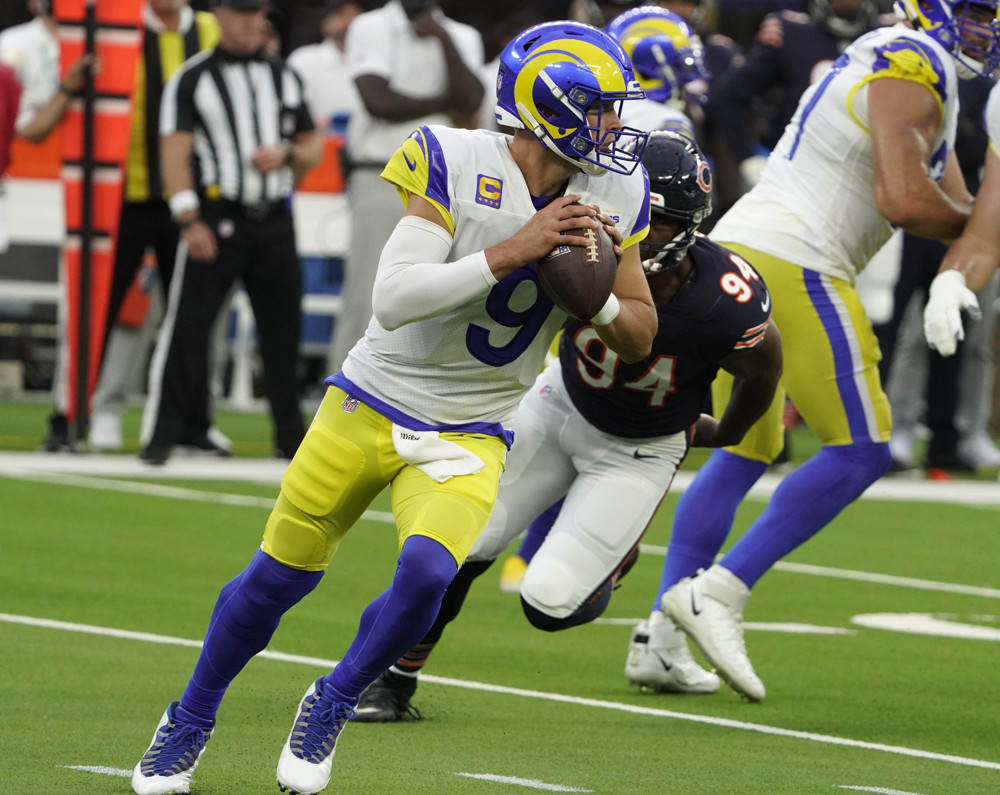 Betting on Super Bowl MVP odds is a great way to find value on the big game. Use NFL expert analysis with best bets to make your pick.

Super Bowl 56 at SoFi Stadium is almost here, and sportsbooks have been hard at work trying to determine who should be favored for Super Bowl Most Valuable Player odds. Now that the final two teams are settled with the Cincinnati Bengals and Los Angeles Rams facing off in Super Bowl 56,  oddsmakers have Rams quarterback Matthew Stafford as the betting favorite for Super Bowl MVP odds.

According to the latest betting odds from BetMGM, Stafford is the +140 favorite to win the award, as the Rams are the pick by oddsmakers to win Super Bowl 56.  The Rams are making their second Super Bowl appearance in four seasons after losing to the Patriots in 2019.

After Stafford, the best odds to win Super Bowl MVP is Bengals quarterback Joe Burrow at +225.  The Bengals improbably made a Super Bowl run in the AFC after knocking off the Raiders, Titans and Chiefs with Burrow leading the offense to victory.

Although quarterbacks have won this award 31 times in Super Bowl history, you can’t overlook skill position players or stout defensive players as viable contenders for Super Bowl MVP odds. The first player not being a QB on the list is Rams star wide receiver, Cooper Kupp at +600. The newest NFL Offensive Player of the Year won the WR triple crown during the regular season by leading the NFL in catches, yards and receiving touchdowns and was instrumental in leading the Rams to Super Bowl 56.

The first defensive player that has a shot for odds to win Super Bowl MVP is another Los Angeles Rams in defensive tackle Aaron Donald at +1200. The reigning NFL Defensive Player of the Year has played in one Super Bowl in his career in 2019 against the New England Patriots.

Here is a list of the top 20 players on the oddsboard for Super Bowl 56 MVP odds. Expect this list to narrow as we get deeper in the playoffs and for odds to shift as players exceed or fall below hefty expectations.

Who Will Win Super Bowl 56 Most Valuable Player?

Here are the current odds to win Super Bowl 56 MVP, per BetMGM.

Why is Matthew Stafford Favored for Super Bowl MVP Odds?

After finally getting the monkey off his back and leading the Los Angeles Rams over the San Francisco 49ers, quarterback Matthew Stafford should be the betting favorite to win Super Bowl 56 MVP odds. The gunslinger amassed 41 passing touchdowns during the regular season while leading the Rams to a division title in the NFC West. His presence spearheaded an offensive rejuvenation in Los Angeles that saw the Rams move to sixth in points per game in 2021 compared to 12th last year. In an offense that scored 84 points in three playoff games en route to the Super Bowl,  Stafford was the proverbial straw that stirred the drink .

In three postseason games (his first since 2016), Stafford was solid with six passing touchdowns and only one interception while throwing for over 900 yards. If he resembles the quarterback we saw during the playoffs, Stafford is a slam-dunk pick for Super Bowl MVP odds, because even if star WR Cooper Kupp or Odell Beckham were to have a huge offensive showing, voters for Super Bowl MVP would likely attribute their success to Stafford's presence instead of rewarding the skill-positions.

The main reason why Stafford isn't a lock for odds to win Super Bowl MVP is turnovers. Although he only threw one interception so far in the postseason, he did lead the NFL in interceptions with 17 this season (seven in final three games) which could be detrimental to his MVP chances. The Bengals forced six interceptions against opposing quarterbacks during this playoff run, and if we start to see the “Detroit Lions ”version of Stafford, bettors could be in tough to cash this ticket.

When I originally wrote this column prior to the Divisional Round of NFL Playoffs, I recommended for bettors to take Bengals QB Joe Burrow at +1800 as his odds would shrink dramatically if the Cincinnati made it to the Super Bowl. Well, the Bengals are here now and as a result, Burrow's odds to win Super Bowl MVP are now down +210.

Trying to find betting value for Super Bowl 56 MVP odds is always a cautious exercise because of the history of quarterbacks winning the award (31 of 55 times), but there could be plenty of opportunity for lesser-known players to make an impact and carve out a spot in history.

Here are two long shot players who bettors should be considering for odds to win Super Bowl MVP:

As the only player playing in Super Bowl 56 with a Super Bowl MVP trophy already, Los Angeles Rams defensive end Von Miller should draw a lot of consideration to win another. The 10th-year pro finished with 10.5 sacks on the season but has seemed to elevate his game since moving over to Los Angeles from Denver. Miller racked up only five sacks in eight games with the Rams during the regular season but seven sacks total over his last seven (including playoffs). His impact rushing the quarterback has been instrumental in getting defensive pressure and pushing the Rams to another Super Bowl appearance.

When Miller won Super Bowl 50 MVP,  he notched 2.5 sacks and a forced fumble while helping the Broncos limit the Panthers to only 10 points.  It's no secret that the Bengals haven't been great at protecting their quarterback this year, as Burrow was sacked 55 times during the season and 12 times in three playoff games.

Miller will certainly get at least one sack in Super Bowl 56, but if he's able to raise his game and make more of an impact, betting him now at +5000 could be a genius bet.

I feel crazy even trying to justify a kicker as a decent long shot for Super Bowl MVP odds, but the fact remains that the Bengals would not be in the Super Bowl if  it wasn't for kicker Evan McPherson. The rookie has been lights-out in the postseason with 12 field goals in three games, and three of them were from beyond 50 yards. He has risen to the occasion each time the Bengals needed him, and you could argue he could be the Bengals' playoff MVP thus far.

The knock on McPherson's case is a kicker has never won Super Bowl MVP before. Even a Hall-of-Fame kicker like Adam Vinatieri , who kicked the game-winning field goal in two of the Patriots' Super Bowl wins, wasn't even a legit finalist for the award.  This isn't to say McPherson doesn't have a chance, but he's at +10000 odds for a reason, and that's because you're betting on something that has never happened before in Super Bowl history.

What Are Super Bowl Most Valuable Player Odds?

The time has come for getting your friends together, prepping your favorite foods, purchasing a tasty alcoholic beverage and watching Super Bowl 56. Why not make the game a little more interesting and wager on who you think will win Super Bowl Most Valuable Player? By the time you get to the big game, there are so many betting options and props that sometimes it be a little overwhelming. One of the many ways to find extra value when wagering on the Super Bowl is to bet on the Super Bowl MVP winner.

When you go to your legal sportsbook of choice, the betting odds for Super Bowl MVP should be listed like this example:

Unlike a moneyline bet where a clear favorite is determined by the betting option with a minus sign (-), Super Bowl MVP odds will typically have plus odds (+) options and the player with the lowest number is considered the betting favorite. In this case, it would be Green Bay Packers quarterback Aaron Rodgers at +400. These odds are considered American odds and based on the assumption you’re wagering $100 each time.

Let’s say you think Rodgers will win Super Bowl 56 MVP and you wagered $100 on him, and he wins it. Your sportsbook would then reward you with $500 for your correct pick — $400 in winnings and your original $100 bet is also returned.

Part of the allure of betting on Super Bowl MVP odds is it doesn’t always go to the quarterback, so bettors can find incredible value on other players such as Tennessee Titans running back Derrick Henry.

Now, let’s say you bet $100 on Henry to win the award and he goes on to have a huge game winning Super Bowl MVP. Your sportsbook would pay you $2,100 for your winning pick with $2,000 in winnings along with your $100 original bet returned.

The strategy with early betting on this market is getting value on a player like Rodgers or Patrick Mahomes. Rodgers was +400 to win the award entering the divisional round of the NFL Playoffs but if the Packers had won the NFC Championship game and were playing in the Super Bowl, the +400 odds would see a significant decrease and would be closer to +110 at best, losing most of its value.