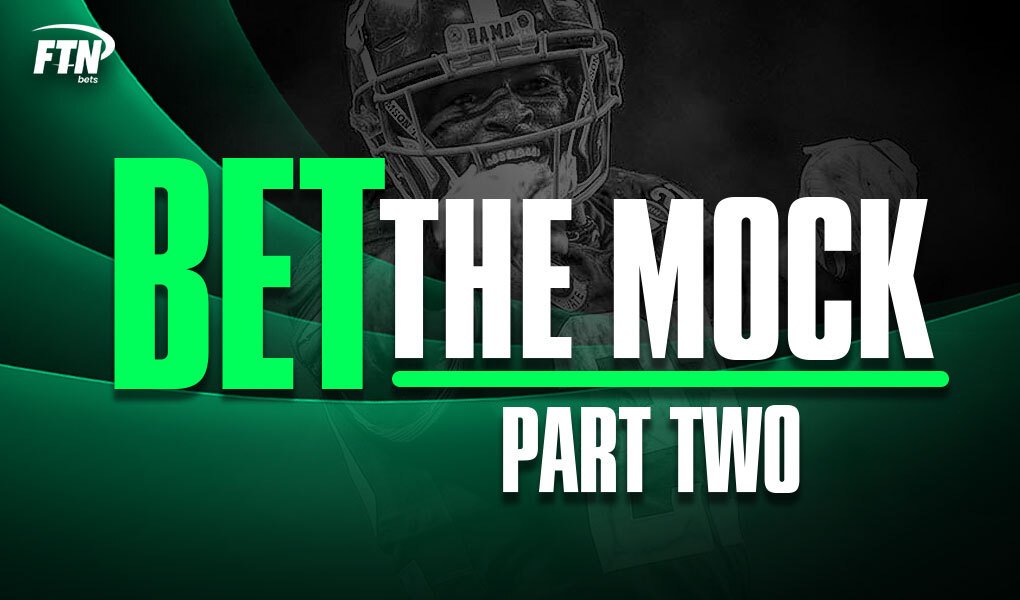 Eliot Crist looks through the best bets to make in the back half of the first round of the 2021 NFL Draft.

There are hundreds of opportunities to make money April 29 when the 2021 NFL Draft kicks off, and I am not talking about the players having their names called.

The first 16 picks and bets are in the books and can be found in Bet the Mock Part 1. Breaking the draft up into two sections allowed me to focus on the most popular bets on the top players of the draft, but I was worried I wouldn’t be able to supply as many bets to the second half of the first round. However, one hour after Part 1 went live, DraftKings Sportsbook added “first position drafted” bets by every NFL team. So now that concern is gone, and the second half of the mock draft can take place.

Reminder: You will notice there aren't any trades. Why is that? Because trying to predict the unpredictable is a fool's errand. When it comes to draft day trades, I am looking at spots that leave me vulnerable to losing a bet and will have no plays because of it, more so than trying to get the trade right and betting accordingly. The odds are stacked against you trying to do that.

Parsons is an elite athlete with some character concerns playing a non-premium position. There is no doubt he is elite at what he does, and he might grade out as a top-10 player, but adding in positional value really hurts him. We have already seen his line move from 10.5 to 11.5, and there aren't many teams that should consider him in the top 10. The Raiders aren't one to care about positional value and currently sit at +220 to draft a linebacker and at +400 on FOX Bet, the Raiders are currently the favorites to draft Micah Parsons.

Best way to bet: Micah Parsons Over 11.5 — Opening as -150 to be the first defender taken, he currently sits at +200 to be so. He is a freak athlete, but an off-ball linebacker simply isn't worth a top-10 pick in today's NFL. With as many five QBs going top 10 along with Penei Sewell, Ja’Marr Chase and Kyle Pitts all locked into that range as well, that leaves just two options for Parsons. He could hypothetically go to the Panthers at 8, but they are said to be locked in on O-line help or Kyle Pitts. The Cowboys have already spent so many resources on linebackers that Parsons makes no sense there. The only scenario that makes any sense is the Broncos at 9, and I am willing to make a -143 bet that he isn't thenin9th overall pick. In nine of 11 mock drafts posted by experts, Parsons was not the Broncos’ pick. Parsons is in play at 11, but the Giants are said to be most interested in adding another playmaker, and I think that will be the direction they go.

Paye has a good chance to go ahead of Jaelan Phillips and is currently the favorite, but I think a team is going to fall in love with Phillips and surprise people. Either way I think a top pass rusher is an option for Miami here as the Dolphins failed to have a single player record 10 sacks last season. Running back (specifically Najee Harris) is the most common mocked pick here, but the Dolphins have taken an extremely analytic approach and spending premium capital on a running back doesn't fit their mantra.

Best way to bet: Kwity Paye Under 18.5 — In the last five draft classes before last year's extremely weak class, at least two edge rushers went in the top 16, averaging three edge rushers in the first 16 picks and the second edge coming off the board by the seventh pick. Whether Paye is the first or second edge off the board, he is a strong bet for under 18.5.

Best way to bet: Washington First Pick WR +1000 on DraftKings Sportsbook — This is only worth a small play, but the odds are too long for a position of need with a player like Bateman having a real chance to fall in their laps.

Additional bet: Over 4.5 WRs in the first round -182 — With three locks in DeVonta Smith, Jaylen Waddle and Ja’Marr Chase all with numbers of 11.5 or lower, Bateman going top 20 and multiple WR-needy teams at the back end of the draft with multiple fringe Round 1 prospects, this bet provides you with so many outs.

The Bears are a very interesting team because their two most commonly mocked players — Bateman and Alijah Vera-Tucker — are both off the board here. Ryan Pace’s job is on the line this season, their QB is Andy Dalton and they sit at no man’s land for a new man at the position. I don’t expect them to trade up for a QB, I think they are willing to be riskier on a Year 1 impact player because of Pace’s job security so they take this risk on Farley, once a top-10 prospect prior to back injury concerns.

Best way to bet: No bet — There is too much uncertainty with this team, and it's reflected in their odds. O-line, receiver and corner are between +250 and +275, and with that kind of variance and lack of upside in a number, you let it go.

In 17 of the last 19 Colts-only mock drafts, they took an offensive lineman or a player not currently on the board available. Jenkins has gone between pick 17 and 23 in the last five mock drafts.

The Titans were unable to generate pressure last year, and while they added Bud Dupree in free agency, they are still in need for more help upfront. Ojulari has a draft prop of 24.5, so this is the perfect range for him to go.

Best way to bet: Titans First Pick DL +800 DraftKings Sportsbook — The Titans were fourth worst in sack percentage in the NFL, lost Jadeveon Clowney (albeit offsetting that with Dupree), and the three most commonly mocked players to them (making up 34% of mocks) are defensive linemen. 8-1 is awesome value and a strong bet. It is important to note that Ojulari has LB eligibility on DraftKings and would not have this bet as a winning ticket (dumb). Regardless, with so much need at defensive line 8-1 is an extremely strong bet.

Newsome is extremely scheme versatile and the Jets have a massive need at corner and up front at the line. People love to mock a running back to the Jets, but spending valuable capital on an invaluable position when you are so far away from competing is a fool's errand.

Best way to bet it: Jets first pick OL +400 DraftKings Sportsbook — I threw this in the FTN Bet Tracker Wednesday night at +600 and would still bet it at this number. I know I just mocked Newsome here, but hear me out. The Jets biggest needs are corner and all three interior line positions as well as having a very replaceable right tackle in George Fant. Joe Douglas used his first two picks on Mekhi Becton and Denzel Mims last year, giving his new quarterback cornerstones, and he is a known trenches guy. I think offensive line should be the favorite for the selection here and even in a scenario where the bet doesn't hit, I love the value of the number.

The Steelers have an old-school mentality and believe in workhorse backs. Harris to me is the clear-cut RB1 on the board and has moved from his opening line of +120 to -150 to be the first back selected. With the odds dictating only one back goes in round one, the Steelers make sense as a logical landing spot and are currently just +225 to draft a running back with their first pick, the shortest odds of any team in the league.