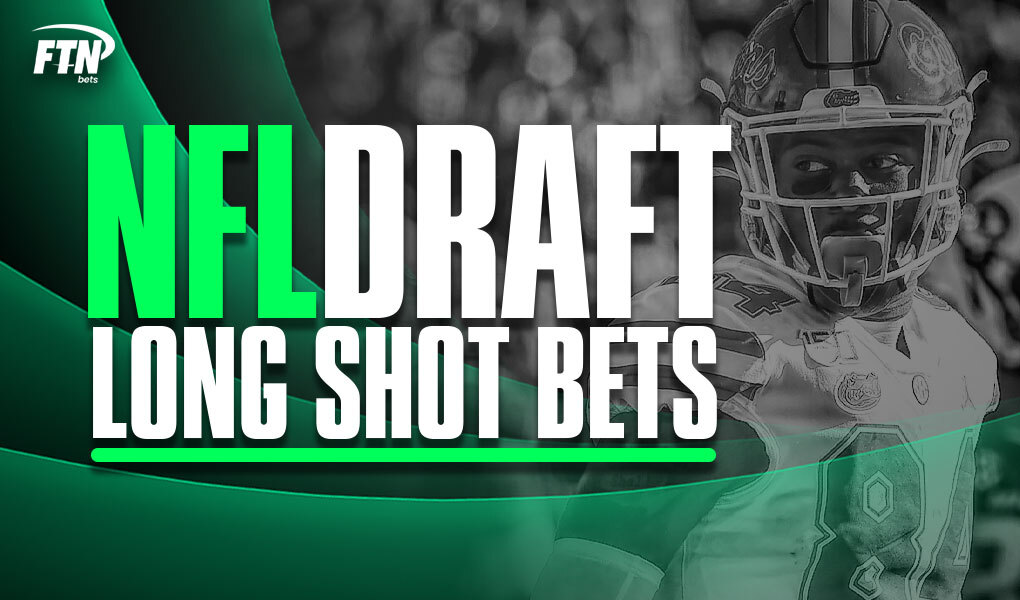 FTN's Eliot Crist takes a look at the 2021 NFL Draft to identify the long shot bets worth gambling on.

The first round of the NFL draft takes place on April 29 and it's a spectacle like few other events. While essentially it is a four-hour event where they are reading off names, players' lives and team outlooks change overnight as the next generation of NFL superstars are welcomed to the league. There is no betting event like the NFL draft, as the sheer number of bets you can place rivals the SuperBowl, but the variance of these bets is absurd. It is important to embrace them.

After the first two picks this year, people don’t know what is going to happen, and taking long-shot bets on things can pay off in a huge way. I wrote up a few landing spot bets varying from +140 to +500, A 10-1 bet on the NFL draft is something that is unexpected, it's not the Jets needed to beat the Chiefs in arrowhead. Embrace the variance, take a few long shots, and cash out big if one hits.

I outlined why I liked this pick so much in my Bet the Mock Series and shortly after the line dropped from +800 to +550 on DraftKings. However, BetMGM just released its first position drafted bets and hung +800 for the Titans first pick to be a defensive lineman. The Titans finished 31st in pressure rate last season and lost Jadeveon Clowney. While they added Bud Dupree, Harold Landry is in the last year of his deal and this team needs more bodies up front to get after the quarterback. The three most commonly mocked players to the Titans all play defensive line. Important to note, Ojulari is listed as a linebacker on BetMGM currently, but they will go by how he is announced on draft day and is currently listed as an EDGE on NFL.com. All three of the most commonly mocked players in Ojulari, Phillips and Rousseau have player prop numbers of 24.5, 26.5 and 25.5 respectively - meaning this is the exact area they are expected to go.

Horn is an elite athlete with strong tape and extremely physical in man-to-man coverage, allowing just a 26.7% catch rate against this past season at South Carolina, the lowest in all of college football. Micah Parsons' stock is slipping right now, moving from 10.5 to 11.5, putting the juice on the over. Horn is listed behind Kwity Paye despite having a lower prop number (13.5 vs.15.5) and is just +200 to be the first corner drafted. Ultimately, I think the first defender drafted plays corner and is Surtain or Horn. Getting 10-1 on a bet that is listed as 2-1 at most books seems like a screaming value, as I am not worried about Parsons and think Horn has a chance to surprise and go top 10.

While you cannot parlay NFL draft bets with each other, FoxBet has some enticing draft specials where you can correlate results. This bet I love because the dominos falling make so much sense and correlate very well. If the Falcons don’t take a QB or trade the pick, it looks like Pitts is their target, which leaves the Bengals to choose between Sewell and Chase, and I am confident the choice is Sewell. This leaves the Dolphins with the last of the elite prospects in Chase, the guy I believe they traded back up to get. So while that all correlates extremely well, we now have Surtain to the Cowboys someone who has been mocked in 71% of drafts to the Cowboys in industry mocks in the last three days and a player I already bet to go to the Cowboys. If the Pitts domino falls, this has a real shot to hit at +1,400. This is the exact way I wrote it up in my first Bet The Mock piece as well.

(Find all my Draft Bets on the FTN Bet Tracker.)